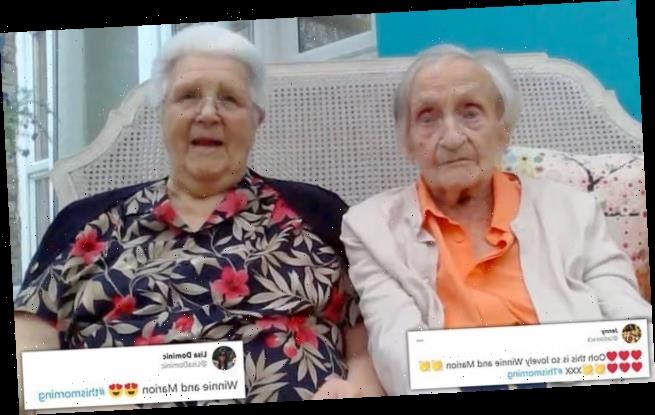 Friends, aged 91 and 94, who were reunited after 73 years when they moved into the same care home leave This Morning viewers ‘crying with laughter’ by revealing they just ‘talk about men’

Two friends who lost touch for 73 years had an emotional reunion after moving into the same care home.

Marion Darbyshire, 91, and Winnie Shaw, 94, initially became friends in their twenties when they worked as sewing apprentices at a factory producing men’s trousers in Wigan, Lancashire.

However, the pair lost touch after Winne left the Coops factory to start a family.

Appearing on ITV’s This Morning today, the pair explained how they recognised each other immediately and have rekindled their friendship, and even cheekily flirted with Eamonn Holmes, 60, admitting that they like to talk about ‘men’, leaving viewers ‘crying with laughter’.

Taking to social media, This Morning fans showed they were clearly touched by the sweet pair, with one viewer saying it had ‘made their day’ and another adding they were ‘adorable’. 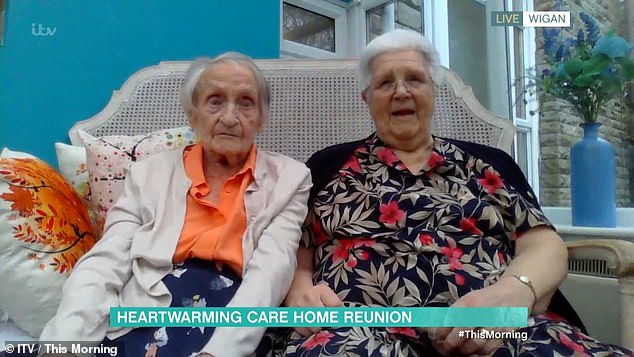 Winnie Shaw, 94, (left) and Marion Darbyshire, 91 (right) became friends 73 years ago working at a clothing factory in Wigan, Lancashire. They have now been re-united at a care home after losing touch

‘Marion recognised me by my name,’ Winnie explained.

‘She said what’s your surname and when I said Shaw she said, ‘oh that’s it”.

The women revealed they spend their time chatting about men, with Marion admitting that she fancies Eamonn.

With a twinkle in her eye,  Winnie added that she ‘liked Eamonn’ and that he was ‘handsome’ and ‘glamorous’ while revealing to his wife and co-host Ruth Langsford that the pair ‘still get up to mischief’.

Speaking earlier this week Marion added: ‘I couldn’t believe it when we were sat at the same table for dinner, I said”is it Winnie Shaw?!

‘I thought there can’t be many Winnies around – and it was her.

‘I feel lucky to have my friend back in my life, we get on just as well now as we did back then.’ 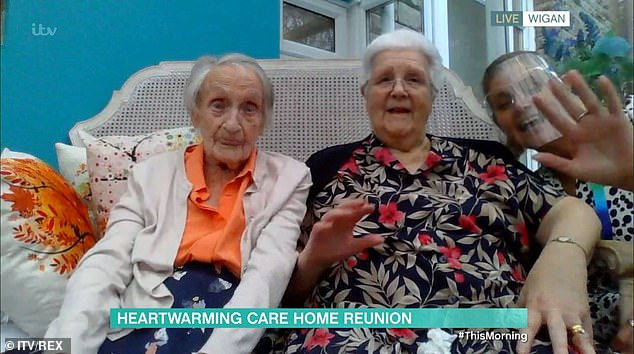 The women revealed they spend their time chatting about men, with Marion admitting that she fancies Eamonn

They started their apprenticeship at the factory as teens and would work ten hour shifts on weekdays and work every Saturday morning.

Despite not having any contact for so many years, the pair hit it off again in Lakeside Care home.

Marion went to Lakeside in May for respite care after battling Covid-19, which saw her become seriously ill and admitted to hospital for treatment.

She was lonely at home, struggled to walk and used a scooter outside if it was not raining.

Marion, who has no children, had to rely on her niece and nephew to do her shopping for her.

But she now feels happier than she has in a long time, especially after catching up with Winnie.

Marion added: ‘We haven’t seen each other now for 73 years, which was a very big surprise for both of us.

‘How many people meet up who had been friends after all those years but lost touch from 18 to 91?’ 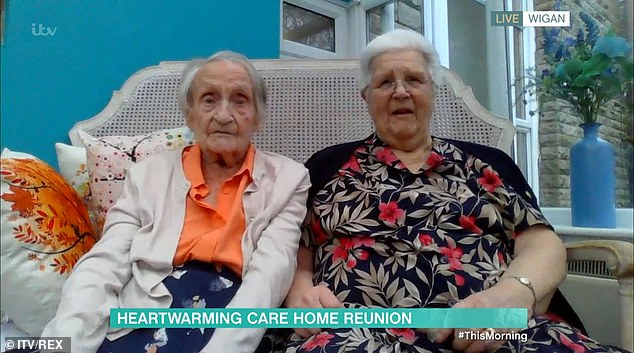 Marion (right) went to Lakeside in May for respite care after battling Covid-19, which saw her become seriously ill and admitted to hospital for treatment

Staff at the care home say they spend their days together ‘causing mischief’ and take part in activities with other residents.

Winnie, a grandmother of eight and great-grandmother of four, said: ‘We left school at 14, we went straight to Coops on an apprenticeship.

‘It was our first job and we worked from 8am to 6pm and were in until 12 Saturday mornings.

‘We lost touch and never met again until we met at the home. When I got married I left work because that’s what you did back then.

‘I couldn’t feel happier that we’re now reunited and get to reminisce on our old memories, it’s lovely to have a friend.’

Viewers of This Morning were left feeling emotional after hearing the friends’ story and how they were re-united.

People took to Twitter to express their love for Marion and Winnie with one person saying: ‘Aww dear Winnie and Marion. What a lovely story! #ThisMorning’

‘Weeping over this, ‘ added another.

‘Can we just have Winnie & Marion on all morning,’ said a third.

‘Aww I love Winnie and Marion. It’s times like this when Ruth and Eamonn are brilliant,’ penned another.

Other people tweeted a serious of heart and heart-eye emojis to express their love for Winnie and Marion’s story.