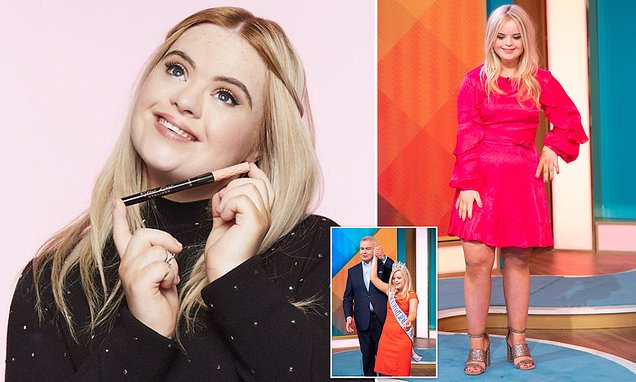 World’s first pageant winner with Down’s syndrome, 19, struts her stuff in a new campaign video for Benefit – after landing her debut modelling job with a major brand

The 19-year-old – who was crowned champion in the Teen Ultimate Beauty Of The World pageant in 2018 made waves when she appeared on This Morning last year.

Kate, who describes herself as the ‘first model in Northern Ireland with Down’s syndrome, was hailed an ‘inspiration’ when she appeared on the ITV show, which saw her strut on the catwalk during the fashion segment.

Now she has partnered with Benefit Cosmetics, appearing on the brand’s Instagram account modelling its new roller liner, in a post that’s been liked more than 4,000 times.

She also appears in a new Wing Women campaign video, confidently strutting her stuff for the camera. 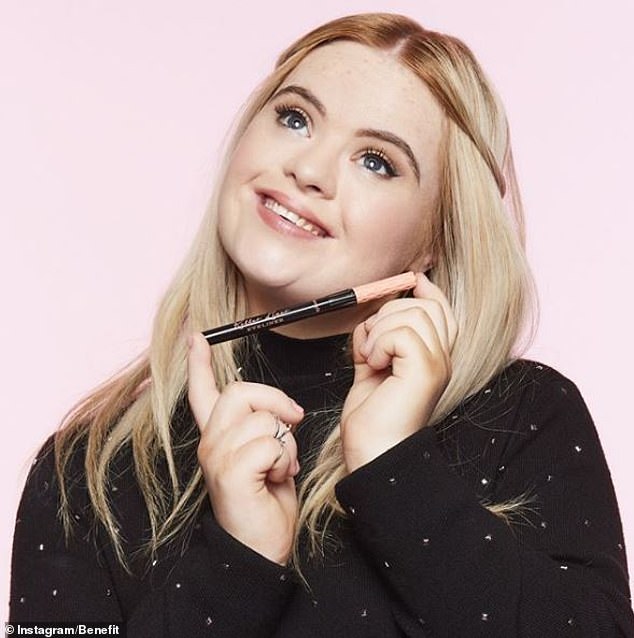 Kate Grant, 19, from Northern Ireland has landed a major gig as a Benefit Cosmetics ambassador and appeared on Instagram modelling the brand’s roller liner 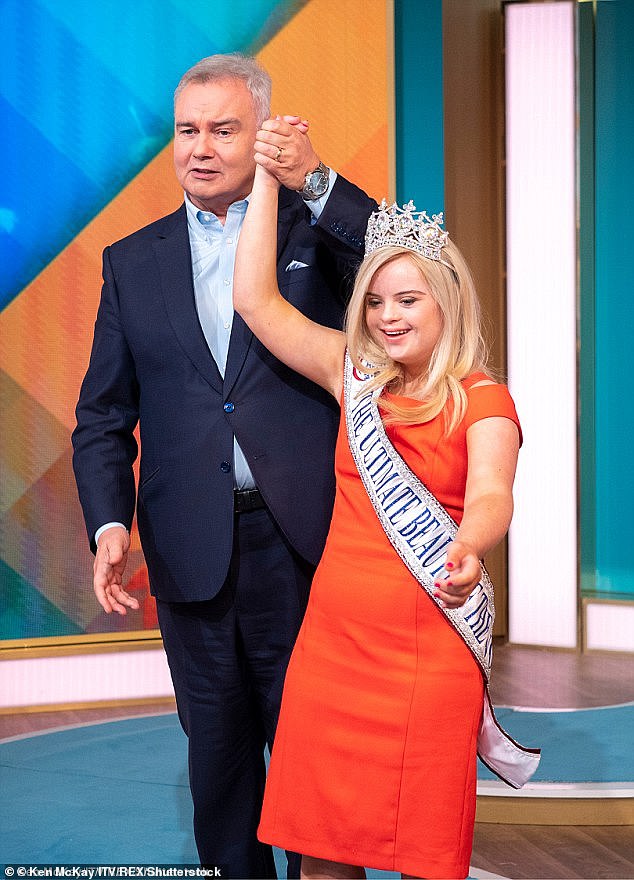 The star was crowned champion of Teen Ultimate Beauty Of The World pageant in 2018, and appeared on This Morning last year with Eamonn Holmes

The post reads: ‘WING WOMAN WEDNESDAY. Introducing our first #wingwomanwednesday the gorgeous @kategrantmodel. We’re so pleased to have her as one of our Wing Women.’

Kate was also showered with praise by fans, following her latest venture. 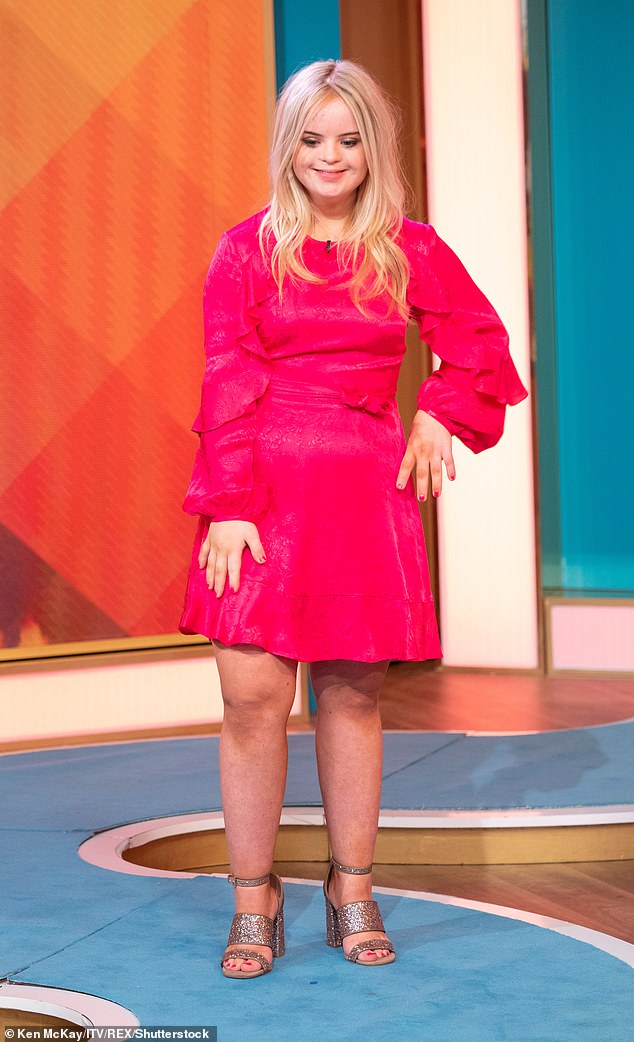 Following her interview on This Morning last year, Kate took part in the fashion segment and modelled an outfit, before she taught Eamonn how to strut on the catwalk 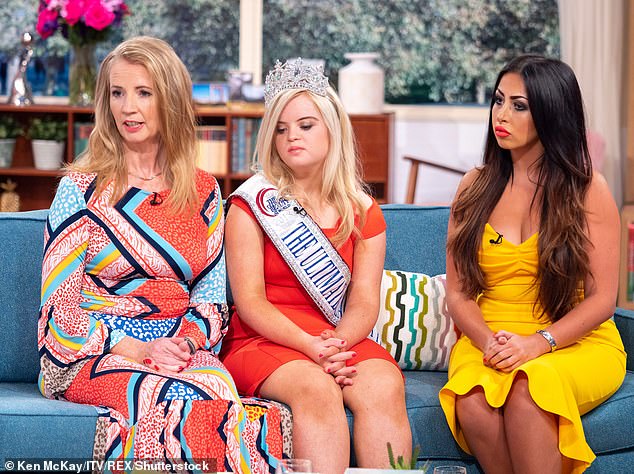 The teen was described as an ‘inspiration’ following her appearance on This Morning in August 2018 with her mother Deirdre (left), when she discussed her pageant win on the ITV show

Another gushed: ‘How fabulous, such a gorgeous model’, while others hailed Benefit for ‘promoting inclusivity’ with their campaign.

A spokesperson for Benefit decided to partner with Kate because of her ‘infectious’ energy.

Speaking exclusively to Femail, a representative said: ‘We discovered Kate by chance in the summer of 2018 when we saw a Facebook video about her journey to becoming a model.

‘We fell instantly in love with her. Her amazing energy was so infectious and we were captivated by her incredible zest for life and determination. She embodied everything we stand for as a brand so we knew we had to find a way to work with her.

Fans flocked to praise Kate on her new venture with Benefit Cosmetics, with one describing her as a ‘gorgeous model’ and ‘fabulous’

‘The opportunity came along when we were casting for a shoot for our latest product launch, Roller Liner Eyeliner.

‘We’re truly honoured that Kate was able to join us, and we hope her involvement goes someway to showing that beauty and makeup shots can absolutely feature people from all walks of life. The beauty industry is changing and we love that people like Kate are leading the way.’

Benefit has hinted they plan to work with Kate again in the future.

They added: ‘We’ll most definitely be looking to work with Kate again on another campaign.’

During her appearance on This Morning last year, Kate said she hoped to use her platform as a budding model to help others.

When Ruth Langsford asked her what she wanted to achieve, she responded: ‘Awareness for Down’s syndrome and disabilities, people with special needs.

‘The inclusion of young adults, young children with special needs.’

Benefit was also praised for their ‘inclusivity’ and including Kate, who has Down syndrome, in their campaign

Her mother Deidre, who also appeared on the show, said she had reservations about entering Kate into the pageant, but realised she couldn’t hold her daughter back.

She said: ‘Her aspiration to walk the catwalk was so strong I had to go with her, I had to support her in what she really had a passion for.

‘It was always in the back of my mind that there would be a lot of negative feedback, but once Kate gets on the catwalk she brings something very special to the catwalk. She has a personality where she engages with the crowd, she oozes confidence.’