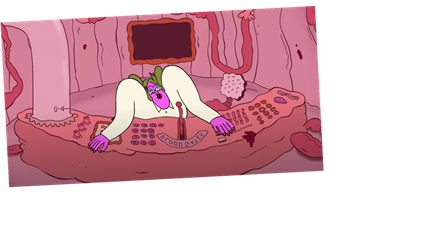 #WombStories is the period advert that everybody is talking about on Twitter, and and rightly so. From blood leaks to infertility, this is why it’s such an important watch right now.

Just last month, New Zealand announced that, instead of labelling tampons and pads as ‘sanitary items’ or ‘personal hygiene products’, supermarkets will now use straightforward language and use the word ‘period’.

It’s perhaps hard to believe that in the year 2020, period products are only starting to be called exactly what they are in supermarkets. But that’s the problem: there is still a stigma around periods.

You only have to look at how groundbreaking Michaela Cole’s recent period sex scene in I May Destroy You was considered. Or the fact that women were still having to pay a tampon tax until earlier this year, because they were considered ‘luxury goods’ by our government.

And then, there’s the issue of advertising.

For too long, period product companies have sugar-coated the stressful, painful and messy reality of periods. Instead, it’s all about keeping things ‘discreet’, hiding behind pink packaging and floral scents, and painting on a smile while battling debilitating cramps.

Thank goodness, then, for the new #wombstories video that everybody is talking about.

The advert, made by Bodyform, finally gets real about our wombs: periods, endometriosis, miscarriage, infertility, IVF, menopause and the decision to not have children are covered in the film – and it shows that there is no ‘one size fits all’ when it comes to discussions around women’s wombs.

Let’s take a look at it below.

Behind the boldness and energy of the advert, there are some facts about our wombs that we need to continue talking about openly.

According to research by Bodyform, two thirds of women (68%) who experienced miscarriage, endometriosis, fertility issues and menopause said that being open with family and friends helped them cope. Yet the same research found that a third of women feel society wants them to keep silent about their experiences (21%).

It also found that  62% of people agree women’s health and intimate experiences are not talked about openly, and 40% of women feel their mental wellbeing is negatively impacted because of this.

Then there’s the fact that 41% feel they will be known for ‘oversharing’ if they talk about an everyday period occurrence such as blood leak. Oh, and a third of women try to keep their menopause/perimenopause a secret and suffer in silence.

That’s why the advert has proven so important to discussion around women’s health.

“This campaign by @bodyformbis so powerful,” wrote one Twitter user.

“It is great to see them sharing people’s real life #wombstories rather than depicting it to be all sunshine and rainbows. Love that they are trying to break the stigma around so many areas with one campaign.”

“Great ad,” tweeted another fan of the video. “Very relatable for so many women. Far better than roller skating in white shorts! Rolling on the floor laughing I use your products because they are unscented and don’t irritate.”

And another person added: “I cannot get over the brilliance of this campaign. The most moving 3 minutes, it’s spot on and just so beautiful.”

Although it would be nice to get to a point where a period being shown on TV isn’t a big deal, this campaign is just one of the things that will help us get there sooner rather than later.