Home » Lifestyle » ‘The Voice’ Recap: Which 8 Singers Are Heading To The Semifinals? 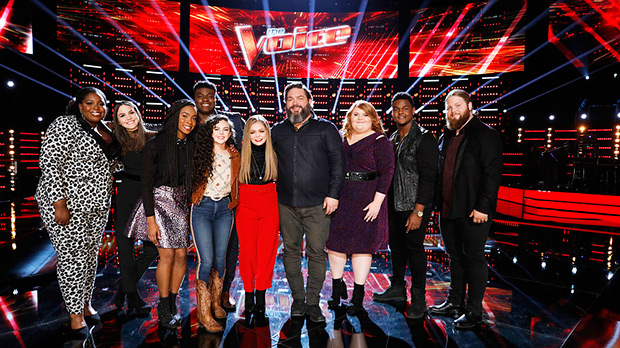 ‘The Voice’ Recap: Which 8 Singers Are Heading To The Semifinals?

Two singers are eliminated on the Dec. 4 episode of ‘The Voice,’ meaning eight are heading to next week’s Semifinals. Who was eliminated and who was sent through? Here’s a recap1

The Dec. 4 episode of The Voice kicks off with a performance from James Arthur and Anne-Marie, who perform their hit “Rewrite The Stars” from The Greatest Showman. The performance is an amazing way to begin the night, but it’s quickly time to get into some results. Carson Daly announces the first person who’s safe and moving onto the Semifinals is Kirk Jay, from Blake Shelton’s team, along with Kennedy Holmes from team Jennifer Hudson. That’s two in, with just six spots left!

After a commercial break, the eight remaining artists head back to the stage for more results. The next person called safe is MaKenzie Thomas from J. Hud’s team, as well as Chevel Shepherd from Kelly Clarkson’s team. Speaking of Kelly, she takes the stage next for a performance of her new single “Heat,” and she KILLS it! While it’s a nice break from the tense results show, though, it’s time for Carson to once again reveal who else is safe. Team Kelly’s Sarah Grace makes it through, and so does Chris Kroeze from Team Blake.

Next, Blake’s girlfriend, Gwen Stefani, hits the stage for a performance of “Feliz Navidad,” and gets everyone in the holiday spirit! Finally, it’s time to reveal the last person automatically moving onto the Semifinals — Kymberli Joye from Team Kelly. That means both of Adam Levine’s artists, Regan Strange and DeAndre Nico, as well as Blake’s singer, Dave Fenley, are in jeopardy and must perform for the Instant Save.

Unfortunately, Reagan is under the weather and can’t perform, but fans are still able to vote for her in the Twitter save. Dave is up first with a rendition of “Amazed,” which is right in his wheelhouse. However, DeAndre gives him quite a run for his money with his performance of “All Of Me.” Now, it’s up to the fans to vote on Twitter for which one artist they want to move on.

After powerful speeches from Blake and Adam about why their respective artists should stay in the competition, Carson reveals that Reagan is safe, meaning DeAndre and Dave are heading home. Next week, eight will be cut to FOUR as the Finals approach!