Home » Lifestyle » ‘The Prom’ review: Broadway is back on Netflix 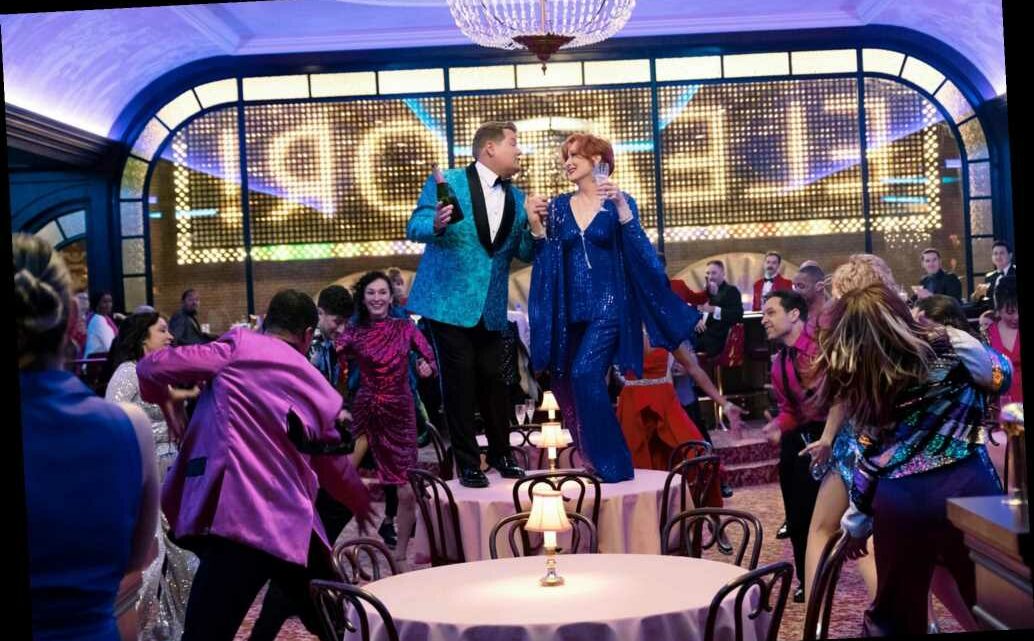 ‘The Prom’ review: Broadway is back on Netflix

Making the Broadway musical “The Prom” into a film was a risky move for Ryan Murphy.

The cute little show by Matthew Sklar, Chad Beguelin and Bob Martin was warmly received when it opened in 2018, but flopped two months after winning no Tony Awards. Unlike, say, “West Side Story,” which was supposed to hit cinemas this Christmas, few people have ever heard of it.

Then again, newness is this movie’s greatest asset. The usual comparisons that dog stage-to-screen adaptations — “Madonna is no Patti LuPone!” — are moot here because most viewers will be attending “The Prom” for the first time on Netflix.

And they’ll have a fabulous night — but it’ll help if they spike their punch.

The outlandish movie is built around a clever and deeply cynical premise: Four struggling, self-obsessed Broadway actors look for a noble cause to support in order to get themselves some good free publicity. They’ve been trashed by critics (Muwhahaha!) and denied juicy roles by casting directors.

Fed up, the miserable misfits go off to Indiana to help a teen lesbian, named Emma, attend her high-school prom, which the PTA has banned her from.

There’s Dee Dee (Meryl Streep), a stage veteran and star of the critically reviled “Eleanor,” a song-and-dance spectacular about that barrel of fun . . . Eleanor Roosevelt. Her FDR and BFF is Barry (James Corden), a flamboyant comic. Their pal Angie (Nicole Kidman) has spent 20 years in the chorus of “Chicago” dreaming of playing Roxie, and tagalong Trent (Andrew Rannells) is a Juilliard acting grad and bartender at Sardi’s restaurant on West 44th Street. (Rannells, by the way, is a fetus compared to the actual bar staff at Sardi’s.)

“Why are you afraid of gay people?” poor Emma (Jo Ellen Pellman) asks the PTA’s top dog (Kerry Washington) during a meeting. And right on cue, in come the actors like they’re storming the “Les Miz” barricade.

“We are liberals from Broadway!” Trent proudly proclaims to the Midwestern crowd’s shock and horror. It’s hard to decide who’s more revolting.

That’s what “The Prom” gets so right: Nobody, save for Emma, is morally clean. The town is marginalizing and bullying an innocent kid, and the narcissist thespians want their “goodwill” to reap Tonys and TV interviews.

The material, filled with peppy pop songs, is admittedly funnier than Murphy and his cast make it. Barry (played on Broadway by the brilliant Brooks Ashmanskas) was a riot onstage, but Corden’s bland performance is generically kind, fey and not mostly joke-less. Someone like Nathan Lane would’ve made a meal of every line.

That said, the story is more moving here than it was at the theater, which comes as a surprise. Murphy’s other musical effort, the TV series “Glee,” was a lot of things, but subtly touching was not one of them. And yet you shed a tear as Kidman and Streep drop their cartoonish Manhattan airs — Dee Dee’s first song sung to the Indianans is called “It’s Not About Me!” — and become mother figures to Emma. Her secret girlfriend is played by the talented Broadway actress Ariana DeBose.

Another out-of-left-field performance comes from Keegan-Michael Key as a forward-thinking high-school principal and Streep’s love interest, Tom. Not everyone in Indiana, it turns out, hates Broadway. Tom visits New York every year (remember tourism?) and sees as many shows as he can afford. A line he speaks that was schmaltzy two years ago hit me like a falling piece of scenery now that Times Square’s theaters are all dark.

Over dinner at Applebee’s, a dejected Dee Dee tells him she’s thinking of quitting Broadway for good.