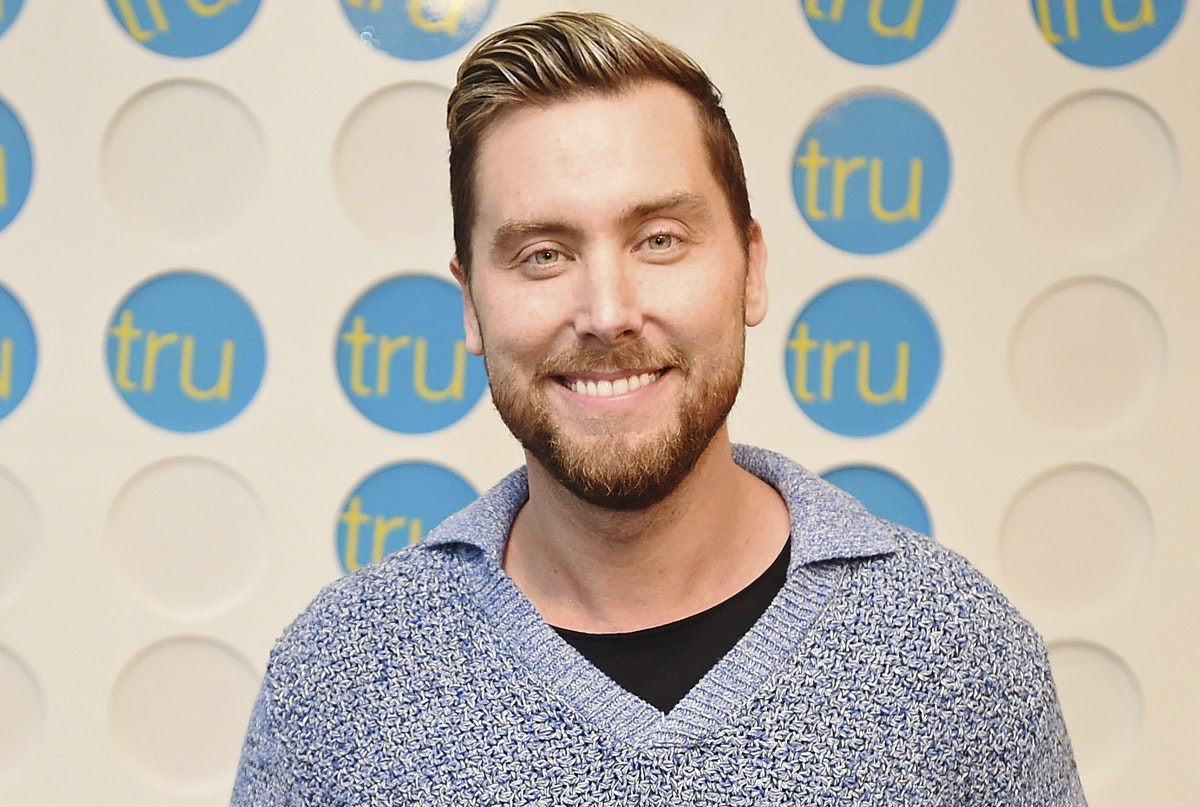 Name a more iconic boy band than *NSYNC. I’ll wait. You’ve probably listed several already, but I will hear none of it! *NSYNC is the greatest boy band of all time, and that’s that. With ’90s music groups getting back together becoming just as popular as old TV reboots, *NSYNC is one of the few ’90s boy bands that has shown no sign of a reunion (that pained me to type). But that doesn’t mean they don’t talk about the golden days of touring. Let’s be real, *NSYNC songs never get old, but there is one *NSYNC song Lance Bass wants to retire for good.

My conversation with Bass (which quite literally made my childhood dreams come true), was part of Bass’ partnership with the Tru by Hilton Connections Event. On Nov. 30, Bass hosted a huge board game tournament at the Tru by Hilton hotel in Salt Lake City. The tournament featured giant Connect 4 boards and was aimed at raising funds for the Boys and Girls Club of America. He tells me he’s happy to be helping out the organization because it’s been doing good for American children for as long as he can remember.

"For so many years they’ve learned to teach these kids how to connect with each other," he says. "These are future leaders, our future astronauts. You know, this is where we can really encourage them and inspire them to be who they want to be in the future." I giggle internally when he says "future astronauts," because remember when Lance Bass was almost an astronaut? The *NSYNC stan in me was very satisfied by this reference. 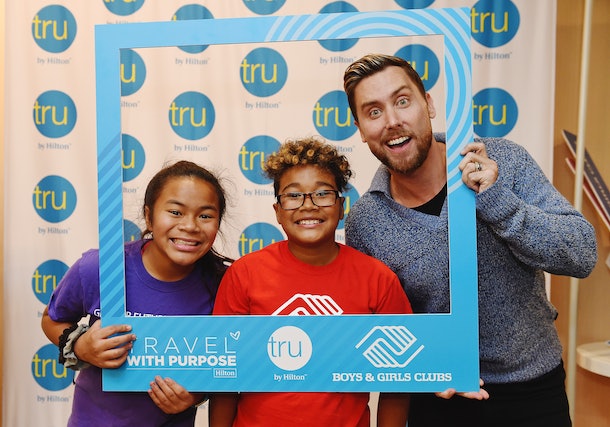 Since moving on from his boy band days, Bass has created a successful solo career for himself with projects such as his SiriusXM Radio show, Dirty Pop Culture, hosting the LOGO reality TV series Finding Prince Charming, and now, he’s going back to his roots by executive producing a documentary on Lou Pearlman. Pearlman was the man responsible for the creation od *NSYNC, who admitted in 2008 to orchestrating a $300 million Ponzi scheme over the span of 20 years until 2006. It resulted in the defrauding of 10 banks and thousands of individuals. He died in 2016 at the age of 62 while still in prison serving his 25-year sentence.

It’s clear as we talk that despite what happened with Pearlman, Bass has largely positive feelings about his past music career. And when it comes to things he doesn’t like about the modern structure of boy bands, the critiques he makes are those of someone who has a firsthand knowledge of what it takes to really make a boy band thrive.

"I’ve seen a lot of bands come and go," Bass says, "and it’s because record labels think they just put four lead singers together and they’re going to love each other and get along. But that’s just not how it works."

He makes it clear that the main reason *NSYNC worked for so long was because they had a strong group mentality. "You have to live with them," he says, speaking from his expert-level experience. "You have to know them exactly. The personalities have a lot to do with it on top of the talent."

And staying power is exactly what *NSYNC has. The group went on their "temporary hiatus" (read: breakup), but their songs have remained pop culture classics and are some of the first things people think of when hearing the words "’90s boy band."

For example, *NSYNC received a star on the Hollywood Walk of Fame on April 30, 2018 — the day before May, which has been dubbed "*NSYNC day" by fans, thanks to the "It’s Gonna Be May" meme. 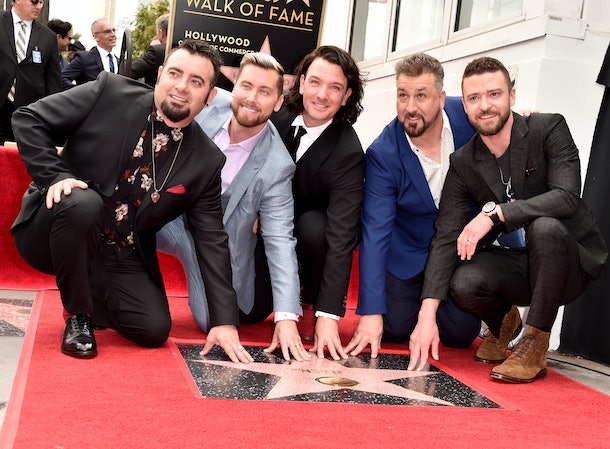 Speaking of that nostalgic day, Bass says it was surreal and joyous to be back with his band members to celebrate their work.

"I think it’s one of those moments you dream of as a little kid," he says. "Being able to sit there and see your name go on a star on the Hollywood Walk of Fame, it’s pretty incredible. And I know all the guys felt the same. It was just kind of one of those speechless days that we still talk about."

One thing he doesn’t want to talk about/hear anymore is "Here We Go." The song is the third track on *NSYNC’s self-titled debut album, and Bass thinks it’s just plain annoying.

"I don’t like songs that name check the group," he says, "and we say *NSYNC in it so much." He continues, "It was one of our first five songs we ever recorded, and we were just figuring out who we were. It’s a little too cheesy for me." He jokes that the song haunts him a bit, as he can’t help but here the intro ("Here we gooooooo!") every time he takes off on a plane. "I’m so sick of it," he quips.

When asked to rank his top three *NSYNC songs of all time, "It Makes Me Ill" gets the No. 1 spot. Now, let me make one thing clear. I am the biggest Beyoncé stan on the planet, but I only know what stanning is because of *NSYNC. Those five men were my Beyoncé before Beyoncé was my Beyoncé, so imagine my sheer fangirl delight when Bass reveals that he and I have the same favorite *NSYNC song.

In second place is "Bye Bye Bye," which is arguably their most famous song, along with "It’s Gonna Be Me" (their only No. 1 single). Speaking of "Bye Bye Bye," Bass says,

Having attended the No Strings Attached tour in 2000, I can vouch that there really is no better concert ending than "Bye Bye Bye."

I mean, just watch this and try telling me it didn’t give you chills.

Bass’ third favorite *NSYNC song is their a cappella cover of "O Holy Night" from their 1998 Christmas album, Home For Christmas. *NSYNC started out as an a cappella group, so having this a cappella track on their Christmas album is a point of pride for Bass. "It’s nice to be reminded of that," he tells me.

Touring with *NSYNC are some of his favorite memories, naturally. He tells me that while they were on tour, their tour bus became their home. And those were the moments when the five guys became the closest.

"One of my favorite things that would just make us feel so normal was, you know, most of your travel time is early morning [when you’re on tour], so at like 2 o’clock in the morning, we would roll up to different truck stops. It was always fun to get out at truck stops, and we’d play a game where you’d have to find the cheesiest item to buy, and for some reason I always won." A cheesy story for a cheesy memory. Cute!

As for what’s next for Bass, he’s planning on teaching the music world a lesson in how to create a lasting music group. Yup, Lance Bass is assembling his own boy band. He won’t be performing in it, so don’t get your hopes up for any kind of *NSYNC reunion on that front, but he will be using his experience and know-how to assemble a new group that he hopes will become "the next *NSYNC or Spice Girls." (*Scoffs* as if they could be replaced…) 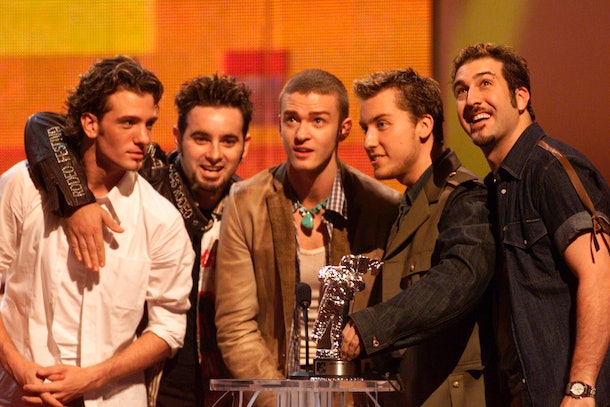 This project is part of the aforementioned Pearlman documentary called The Boy Band Con, which is slated to premiere at South By Southwest in 2019. His assembling a new boy band is what Bass wants to contribute to music in lieu of giving advice to current pop groups like BTS and NCT 127.

"I don’t think people really know how to do it," Bass says. But that’s the only kind of return to his ’90s roots that Bass plans on doing. I wasn’t about to let him get through this interview without asking if there is a possibility that *NSYNC could get back together one day. (The only time they’ve officially reunited was to do a short performance in Justin Timberlake’s Video Vanguard performance at the 2013 VMAs.) Heartbreakingly enough, his answer was a big ol’ no.

"I mean, no," he says, shattering my heart into a million pieces. "We get offered that all the time," he continues. "Trust me, it would be fun, it would be amazing. There’s always a possibility of that, but there is nothing we’ve talked about."