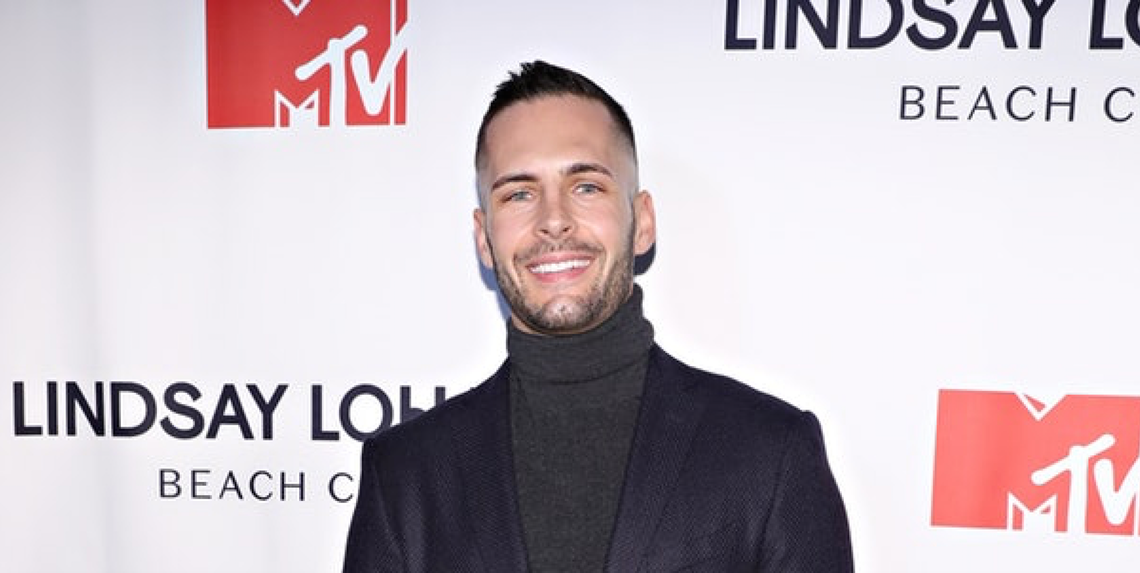 In the trailer for Lindsay Lohan’s Beach Club, Lindsay’s partner Panos explained that there would be no second chances for the VIP hosts at Lohan Beach Club. "If they don’t work hard," he said, "that’s it. They’re gone." In Episode 3, Lindsay and Panos decide to bring in a handsome new host by the name of Alex to keep all the other workers on their toes. But just who is Alex Moffitt from Lindsay Lohan’s Beach Club, and what is his entrance going to mean for the rest of VIP hosts on the show?

According to his intro on the show, Alex is a bartender who hails from Los Angeles, where he works at Micky’s and The Abbey, two pretty famous clubs in West Hollywood. According to its website, The Abbey received the MTV Logo Award for best gay bar in the world twice. Micky’s is a nightclub known for its show, Showgirls, which features RuPaul’s Drag Race alums Morgan McMichaels, Ongina, Sonique, and others, per the club’s website.

When Alex walked on the scene in Mykonos, he was immediately tasked with looking after top-tier VIP guest, Alesso, a DJ and close friend of Lindsay. Partnered with bad boy Brent Marks, Alex seemed to shine at everything from passing out fliers to flirting with Italian girls. His aptitude for his job wasn’t lost on either his colleagues or his bosses, but how did Alex actually feel about working in such a high-stress, celebrity-studded environment?

In an interview with E! News from January 8, Alex explained that while she’s at work, Lohan doesn’t mince words with her employees. "She’s been in such a harsh spotlight before, so I don’t think she has the patience sometimes to just be soft with people," Alex told the outlet. "She’s just going to tell you how she feels and be very direct with you and I think it stems from her history."

On Instagram, Alex posted a picture of himself and his boyfriend flanking the former-actress-turned-club-owner at a party in New York, celebrating the premiere of the series.

He also posts pics of himself and his castmates out promoting the show, and seems to have made a ton of friends from the experience. In one of Alex’s first confessionals, he said he didn’t want to get sucked into the house drama, and I’d guess he’ll be working hard to keep it that way for the rest of the season.

But is that going to be as easy as it sounds? Mike already revealed to the audience that he’s bisexual, and that he and Alex have a history together. However, at the moment it doesn’t look like Alex is looking for anything more than friendship and a good co-worker relationship. Another cast member, Jonitta, was also seriously bummed to learn that Alex had a longterm boyfriend, so he definitely caught everyone’s attention. (Judging from Alex’s Instagram, though, it looks as though he and his boyfriend are most likely still going strong.

As for things with Mike, going from Alex’s Instagram, it looks like the two former flames most likely managed to keep things friendly and professional, since Alex shared a few shots of them together. It also looks like Alex and Sara are well on their way to becoming pals, as she tweeted his short video from the official Lindsay Lohan Beach Club Twitter account with the sweet comment, "Hi Bestie!" Here’s hoping that a budding friendship between Sara, Alex, and Mike means that Sara has less time for Brent and all of his foolish drama.

For the moment, it looks like Alex is just the right infusion of work ethic and positive attitude that everyone at the Lohan Beach House desperately needs. While it’s possible that he could wind up succumbing to the temptations and trials of life under the VIP cabanas in Mykonos, I’m personally pulling for him to be a good influence on those around him instead.