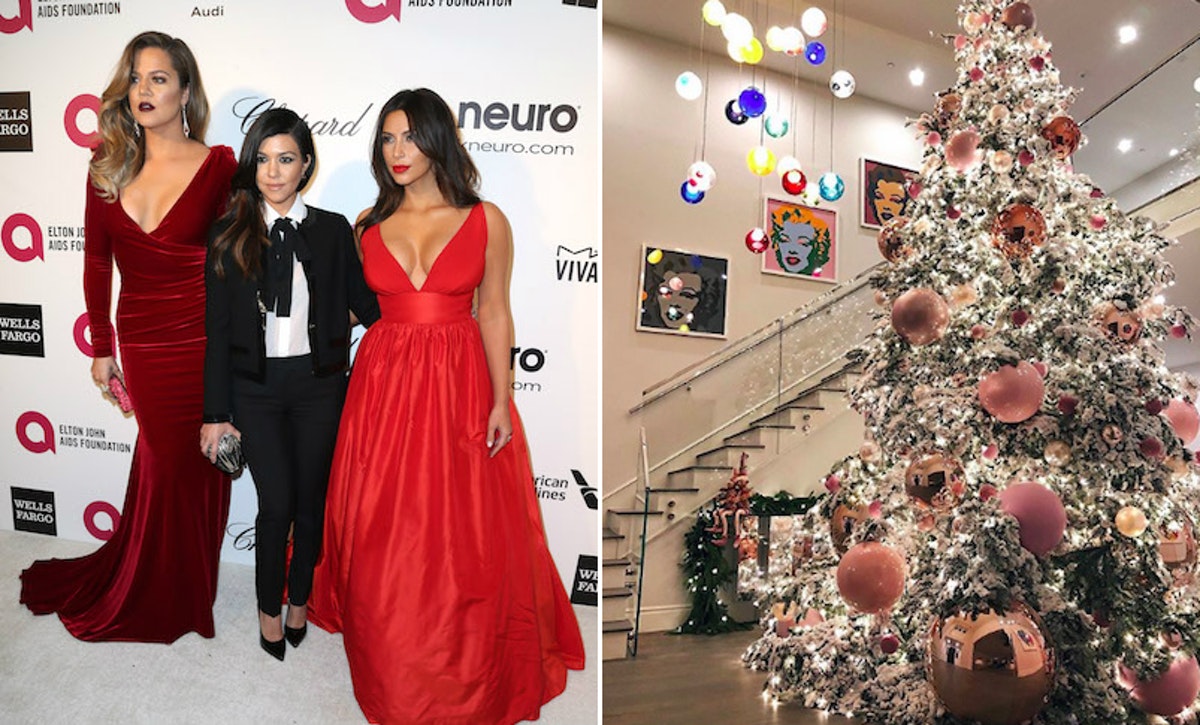 The Kardashians’ Christmas Decorations Through The Years Are Serious Pinterest Goals

There’s no place like home for the holidays, but there’s also no place like the Kardashians’ homes, either. We know that Kris, Kim, Kourtney, Khloé, Kendall, and Kylie are all super festive when it comes to the Christmas season, and their yearly updates on social media prove it. This is a family that values opulent decorations and over-the-top holiday gatherings, and those who adore the family (for example: me) are lucky enough to see bits and pieces of it on Instagram and Snapchat. But if you look back at the Kardashians’ Christmas decorations through the years, you’ll see that this isn’t anything new. This family has been crushing Christmas season for years and years, and are basically holiday pro’s at this point.

You can choose not to believe me — but you’d be choosing wrong, because it is my firm belief that the Kardashian family is one of the most festive families this world has seen. They take a tree and make it look better than Rockefeller Center. They take a boring driveway and transform it into a scene straight from Babes in Toyland’s March of the Wooden Soldiers. They’re basically Christmas magicians, and we should just feel grateful that we get to catch a glimpse into their world.

Take a look at all of the Kardashian’s Christmas decorations through the years to get you feeling merry and bright.

It's beginning to look a lot like Christmas… Thank you @jeffleatham for making my house feel magical for my Grandchildren!!!! I am in awe!!! #beautiful #christmastime #stunning #obsessed #santa #besttreeever

Have you ever seen a more glamorous holiday setup than momager Kris Jenner’s entryway? She’s got three enormous trees loaded to the brim with decor, and lights and garland that take up almost every inch of the room. Jenner took to Instagram and wrote,

If Kris Jenner won Christmas 2015, then Kylie definitely stole second place. She took to Instagram to post a photo of herself amongst friends in her new home, writing, "First friend Christmas dinner at the house."

Behind the group of friends is a stunning Christmas tree, but what made me salivate was what was in front of them: a gorgeously set table, covered in fake snow and a candle centerpiece that is reminiscent of a winter wonderland.

In 2016, we were #blessed to witness Kim Kardashian’s BFF Jonathan Cheban take a video of Kim’s absurdly large Christmas tree.

"Oh my God, Kim," you hear him say in the video as he films the gigantic tree. "This tree is huge! It’s literally Rockefeller Center in Belair." Honestly? He’s not wrong.

You can also hear Kim subtly say, "Just lights, no ornaments," which I took to mean that this jaw-dropping creation isn’t even finished yet, and we probably couldn’t handle it when it reached completion. Again, not wrong!

Oh, and if you thought that the exterior of Kim’s house was ignored, LOL, because it literally looked like a fairy wonderland of sparkle and glitz:

I low-key wish that my house looks like this year-round.

Some of us are more festive than others. Merry Christmas Eve!

There are a variety of things in this photo that makes me very happy. Kourt’s got a gorgeous tree decorated with lights and all sorts of baubles. She’s got what looks to be 80 rows of presents underneath said tree. And my ultimate favorite: A gaggle of UGLY (more like adorable) Christmas sweaters! Bravo Kourtney. Bravo.

thank you @jeffleatham & team for making my XMAS dreams come true! 20 feet of magic! Even more perfect in real life … ?

If you don’t remember the chaos that ensued after Kylie posted this picture of her pink Christmas tree, then perhaps you slept through 2017. This was right around the time when fans were convinced that Jenner was pregnant… and that her all-pink tree was a hint that she was having a girl. She also used a little pink bow emoji in her caption, which made fans even more skeptical that she was hiding something.

And, while we now know she *was* in fact expecting her daughter, Stormi, at this point all we can do is look back and applaud the drool-worthy decorations, no matter if Kylie was sending us a subtle message or not.

Even though it’s her mom’s house, we have Kim K to thank for showing us Kris Jenner’s Christmas decorations. She uploaded a video on Snapchat that was essentially a tour of Jenner’s house, and it basically blew everyone’s minds.

"My favorite thing to do is drive around the town and show my kids all the Christmas tree lights," we hear Kim saying as she walked up her mom’s driveway filled with dozens of nutcrackers and twinkle lights. "They haven’t seen my mom’s house decorated yet. She did a rainbow theme." Inside the house, we see even more decorations, and it’s enough to make you wonder whether Kris Jenner lives a secret double life as Mrs. Claus.

Our girl Khloé has shown her fans that Christmas is in full swing in Cleveland this year, and has an endless amount of decorations to prove it. She took to her Instagram Story to show her fans what she, Tristan, and True are workin’ with… and it all looks pretty damn perfect to me.

For starters, she’s got a ton of little trees with glitzy branches: 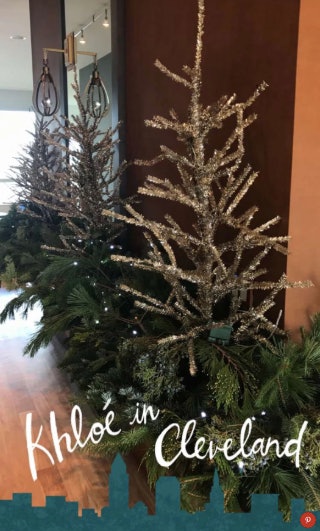 And her Christmas ornament game is obviously on point: 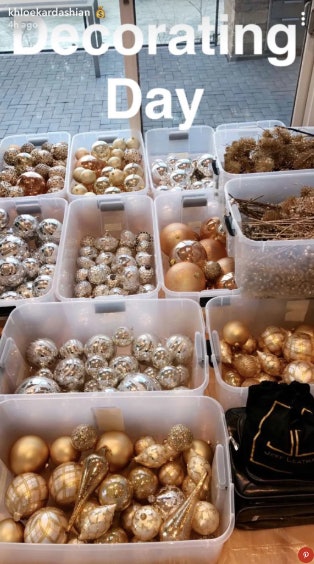 And let’s just talk about the completed Christmas tree, because it is worthy of the world’s attention: 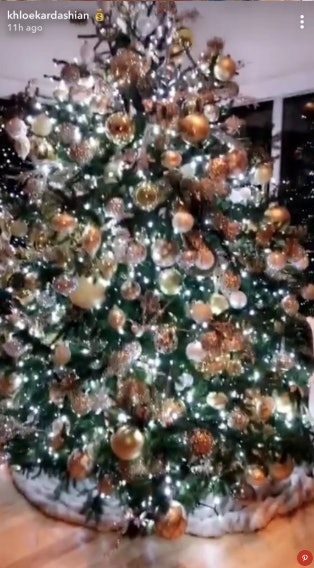 And to top it off, she’s decorated her home with reindeer. A lot of reindeer: 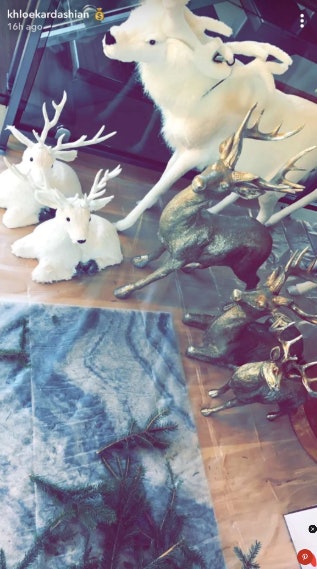 It looks like little True is going to have a very merry Christmas, if you ask me.

gold is the theme this year ✨ thank you @jeffleatham and team for never failing to make christmas magic happen..

Kylie is back at it again this year with an aesthetically-pleasing tree, only this time it’s not pink, but gold. It’s really freaking gorgeous, and I’m really freaking jealous.

She did ensure that the color pink would be weaved in somehow, though, and decorated her console table with, erm, these guys: 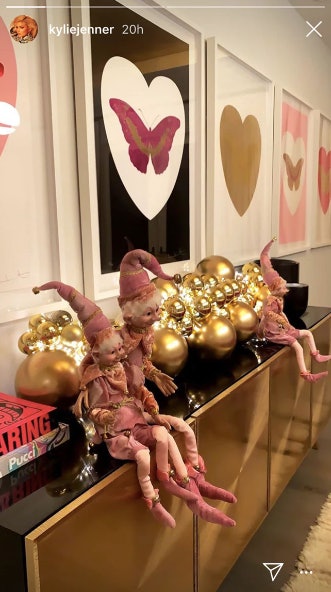 Are they cute? Are they scary? They’re a mixture of both, TBH. 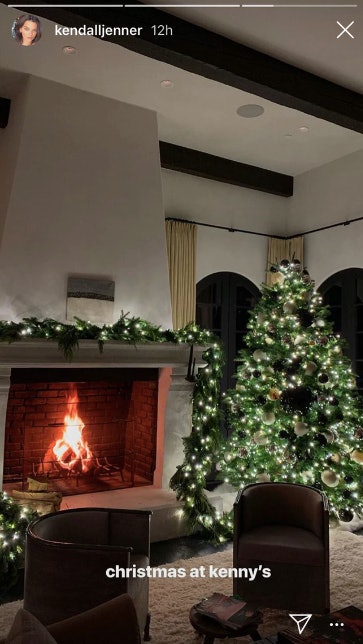 Last but certainly not least, we have Kendall Jenner’s simple-yet-sophisticated setup, with garland and lights neatly displayed over her fireplace and a lovely Christmas tree propped up in the corner. The look is very classic and chic — and we’d expect nothing less from our girl Kendall.

So there you have it, friends! A look back at our favorite reality TV family and their holiday decorations through the years, having themselves a merry (not-so) little Christmas.

8 Holiday Fashion Trends That Will Make You Feel Like a Glam Queen, For Sure
World News