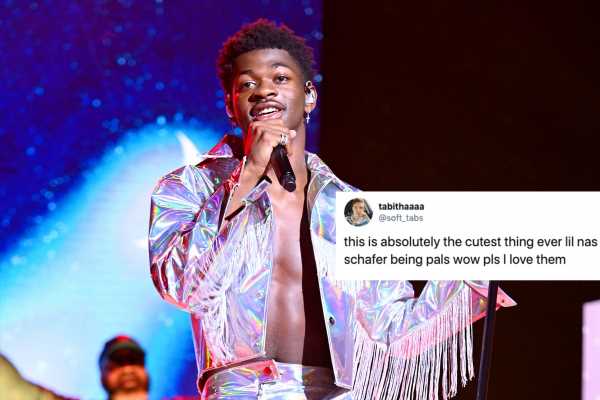 Worlds are colliding, icons are meeting, and fans are living for it. After being posted by the rapper on Instagram, Lil Nas X and Hunter Schafer from Euphoria‘s new photos together are, understandably, causing fans everywhere to go wild.

On Sept. 5, Lil Nas X took to Instagram to share a moment with one of his newest pals, telling fans to get ready for a "new friend alert!! ??." In an IG gallery, he posted a couple photos of himself and Schafer sharing an embrace and giving a thumbs up to the camera, clearly signifying that their friendship is already off to a great start.

Fans were truly living for the pair’s get-together, simply based on the many reactions to the pics all over social media. And, honestly, with both Schafer and Lil Nas X dominating the entertainment industry and doing so with an infallible sense of charm, who can really blame fans going wild over their friendly hangout session?

On Twitter, one fan was overjoyed to see the two LGBTQ icons hanging out together. Another tweeted, "this is absolutely the cutest thing ever lil nas x and hunter schafer being pals wow pls I love them." And yet another person wrote that the icons’ meeting was "the most wholesome thing on the internet" right now, and they’re definitely not wrong in saying so.

Lil Nas X and Schafer have quite a bit in common actually, so it’s easy to see how they might have become fast friends. Both the rapper and the actor have shot to fame over the last couple of months. Lil Nas X first came into icon status back in March thanks to his incredibly catchy song, "Old Town Road," that dominated the Billboard chart for a record-breaking 19 weeks. Over the past couple of months, Lil Nas X has released even more new music, obtained a few MTV Video Music Awards, and engaged in an eye-opening and mature conversation about the LGBTQ community with fellow Hollywood figures. In other words, he’s really taking over the reins on his own success story.

And Lil Nas X’s collaborator on the chart-topping remix of "Old Town Road," Billy Ray Cyrus agrees. In an interview with HITS Daily Double, the country veteran said about the 20-year-old’s sudden superstardom, "Lil Nas X is handling it well for a [20]-year-old kid whose first song propels him to Elvis-meets-Drake status," he said. "Think about it. But he’s hanging in there and enjoying it, which is great."

As for Schafer, the actor had a breakout role on the hit HBO series Euphoria, in which she plays the character of Jules who has been involved in a complicated romance/friendship with Rue, played by Zendaya. In an interview with Marie Claire, the actor opened up about dealing with her sudden rise to fame and shared a sentiment that her new friend and fellow overnight sensation, Lil Nas X, can likely agree with. “It’s really wild to be at this new level of visibility,” she said. “It’s something I’m still adjusting to and trying to understand.”

Thanks to their similar success stories, it sounds like Schafer and Lil Nas X have a lot that they can bond over during any of their fun, fan-approved hangout sessions.