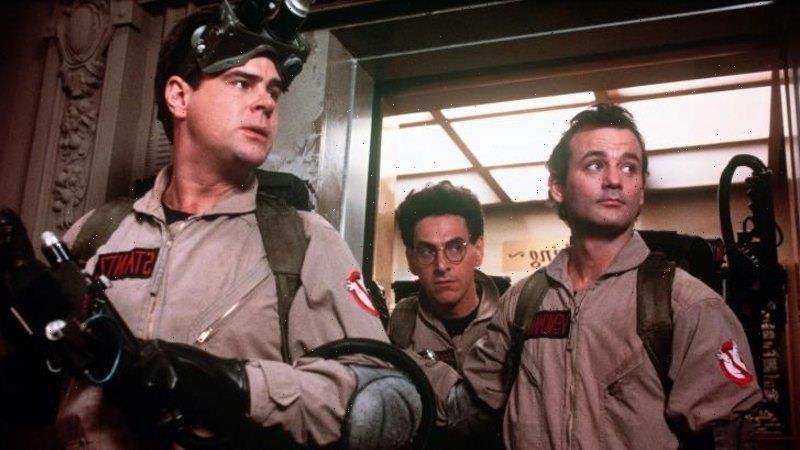 Ghostbusting is something of a family business for Dan Aykroyd. With Harold Ramis, the 69-year-old Canadian actor wrote (and, with Ramis, Bill Murray and Sigourney Weaver, starred in) the iconic 1984 comedy hit Ghostbusters.

Some four decades later, Aykroyd is back in the film’s signature uniform (in real-life, CWU-27/P flight suits of the kind worn by the US Air Force and Marine Corps) and returning to the world of Slimer, Gozer and Stay Puft, in Ghostbusters: Afterlife, a sequel to the original film and 1989’s Ghostbusters II. 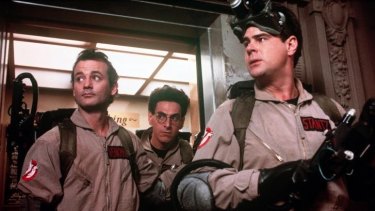 But Aykroyd’s connection to the Ghostbusters story goes back a century, first to a childhood surrounded by ghost stories courtesy of his father, Peter Hugh Aykroyd, a civil engineer who worked as a policy adviser to then-Canadian Prime Minister Pierre Trudeau, but who moonlit as a ghost hunter and co-wrote the book A History of Ghosts: The True Story of Seances, Mediums, Ghosts, and Ghostbusters.

And to his great-grandfather, Dr Sam Aykroyd, a dentist who, in the 1920s, was a member of the Lily Dale Society of Chautauqua, New York, a “member organisation and residential community comprised of persons who practice the faith of spiritualism”, according to their website.

“Sam began to do research into some of the stuff that [British physicist] Oliver Lodge, and [British chemist] William Crooks, and Arthur Conan Doyle were doing, really trying to scientifically understand how voices can reach back from the past and how apparitions can appear,” Aykroyd says. “My great-grandfather was a part of that scientific inquiry.”

With all of that going on around him, the young Aykroyd sat cross-legged in front of the television in the 1950s, glued to a peculiar genre of classic supernatural comedy movies: Hold That Ghost, which starred Bud Abbott and Lou Costello, The Ghost Breakers, with Bob Hope, and Ghost Chasers, with the Bowery Boys. 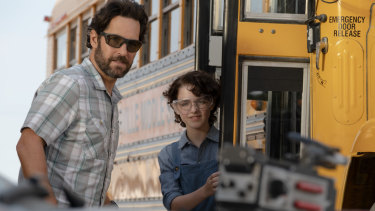 Unsurprisingly, decades later, and off the back of his success on the American sketch comedy institution Saturday Night Live, and the 1980 hit The Blues Brothers (which he co-wrote with co-star John Belushi), Aykroyd wrote his take on that genre, infused with all the ghostly minutiae he had gleaned from his wild upbringing. The film was called Ghostbusters.

Aykroyd met with director Ivan Reitman at Art’s Deli in Studio City, in Los Angeles, and originally pitched the film as a two-hander for himself and Belushi. After that meeting they recruited Ramis, who came on as co-writer as well, and their co-star Bill Murray. The following year, on holiday with their families in Martha’s Vineyard, Massachusetts, Aykroyd, Ramis and Reitman refined the script.

When it came out, Ghostbusters was a hit, pulling more than $US300 million from a $US25 million budget. Columbia Pictures (now Sony) was thrilled and a franchise was born. A sequel followed, an animated series and tie-in video games. In 2016, an all-girl reboot came from director Paul Feig. And now, Ghostbusters: Afterlife, written and directed by Reitman’s son, Jason Reitman.

Ghostbusters: Afterlife stars Mckenna Grace and Finn Wolfhard as Phoebe and Trevor, the teenage grandkids of the late ghostbuster, Dr Egon Spengler (Ramis), and Paul Rudd as their summer school science teacher Gary Grooberson. It also features appearances by some of the original film’s cast, including Aykroyd, Bill Murray and Ernie Hudson. 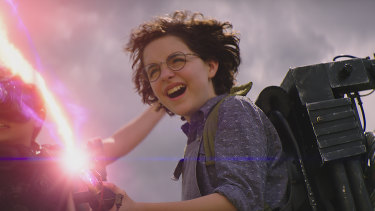 She ain’t afraid of no ghost: Mckenna Grace in Ghostbusters: Afterlife.Credit:Sony Pictures.

The film’s DNA is beautifully nostalgic. It contains shades of Raiders of the Lost Ark and The Goonies, and very specific nods to moments and characters from the original Ghostbusters film. It is aimed squarely but uncynically at an audience longing to glance backwards at a childhood classic.

“Jason’s script was brilliant and wonderful, that convinced me right there, and because it links to the first movie in its DNA, and it draws very much from the mythology of the first movie,” Aykroyd says. “But what convinced me was the emotional tug of the story. As soon as I read it, I called Jason and Ivan, and said I am 100 per cent behind this.”

Pulling the uniform back on, Aykroyd says, felt like the first film had only wrapped production the day before. “It felt like yesterday, it felt like we never had them off,” he says. “It felt like being called into service. Truly, it was a surprise to me, how enduring it’s been. [Back in 1984] we just thought we were doing a movie.” 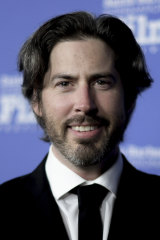 When the new film was in development, Reitman said it was an opportunity to give Ghostbusters back to its fans. That notion opens up an interesting question in the realm of filmmaking as a popular art: exactly who owns a finished film? Particularly when fans’ box-office dollars fund its transformation into something bigger, as is the case with Star Wars, Indiana Jones and, now, Ghostbusters.

“As far as who owns the film is a fascinating question, and what I do know is that this is not a film that I ever owned,” Reitman says. “This film has belonged to anyone who’s ever held Ghostbusters in their heart. And that’s why it took me so long to say yes. I didn’t want to let them down. I didn’t want to let my father down. I see myself as someone who is simply carrying the baton momentarily.”

Which brings us to the other peculiar aspects of the film as an Aykroyd family business: Jason Reitman is producing and directing the sequel to two films produced and directed by his father Ivan. (The elder Reitman’s credits also include films such as Stripes, Twins, Kindergarten Cop and, as a producer, Animal House.)

As a result, Reitman has been presented with every permutation of the take-your-dad-to-work-day joke. Attempting to put a fresh spin on it, I ask him how difficult it is to objectively deal with his father’s work? 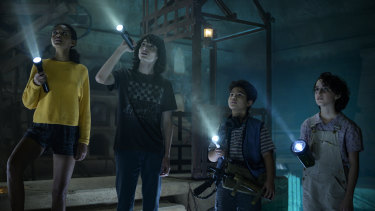 “The strange part is delineating the time we spend as father/son versus producer/director, and sometimes that has to be done on the same phone call,” Reitman adds. “So we could be having an argument about something in the movie and it can be a knock-down drag-out fight, but at some point we’re going to have to segue, so I can say, hey, how is mum doing? And that’s the tricky part.”

The building blocks of a Ghostbusters story are the combination of science and an open mind, Reitman says. “That’s the thing that makes this mythology so unique, you have these brilliant professors in the original who clearly approach everything with scientific rigour, but at the same time are open to the concept of the unknown.

“The other unique thing about the first Ghostbusters film is that it is a comedy that takes horror seriously, and it is a comedy that takes science fiction and visual effects seriously. I’m not going to be the first person to say that horror and comedy share DNA and that they are both meant to inspire an involuntary act from the audience. My father made a comedy in which the horror would be taken 100 per cent seriously.” 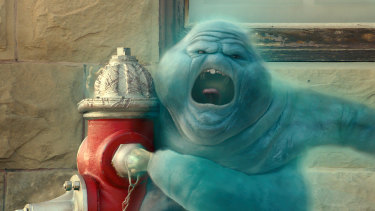 Unlike the original Ghostbusters, which was set to a grey colour palette among the pavements and concrete of New York City, Ghostbusters: Afterlife shifts the action to the American west, where grainy shades of wood and sand brown dominate.

“I have to admit not exactly knowing the answer to that,” Reitman says, when I ask him about so distinct a change of setting. “For whatever reason, my career has consistently taken me to the American midwest, that’s where most of my films take place. This is my first one that really takes place out on a farm.

“But it always made sense somewhere in my head that the Ghostbusters equipment would be found covered in dust, somewhat rusting in a farm or in a barn, and that there would be this delightful mystery as to why it was there, and that this is where you would change hands to the next generation.

“There was something about the reclamation project of the Ghostbusters equipment that I really enjoyed. That was part of the passing of the torch and the passing of a legacy.”

The Hollywood Reporter talked up the film, comparing it to Stranger Things, The Wizard of Oz and Close Encounters of the Third Kind. And the film bible Empire acknowledged its evident love of the original Ghostbusters film. But there would likely be no bigger fan than Aykroyd’s great-grandfather, Dr Sam Aykroyd, the man whose belief in spiritualism started it all a century ago.

“Oh, he would have loved it,” Aykroyd says. “He would love this iteration of his work. I know he would love it. He had a great sense of humour and he was all about exposing [people] to this kind of research.”

Ghostbusters: Afterlife is released in cinemas on January 1.