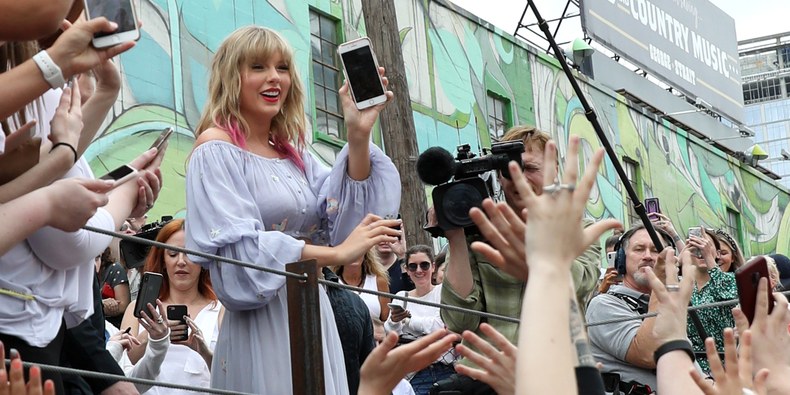 Taylor Swift set a mysterious countdown clock to April 26th, and now we’re mere hours from a reveal. And while fans have widely speculated that the countdown will mark the release of T7, the pop superstar’s rumored seventh album, Swift has played things close to the vest, dropping subtle hints (a change to her Instagram content and color scheme, clues on Spotify). But today, Swift dropped some major info on her Instagram story. And it’s all thanks to a butterfly mural in Nashville.

"I went on Tumblr and everyone thinks it’s not—they think it’s fake. They think it’s just like one of their theories," Swift said, filming in car on her way to surprise fans. "Did I put up the butterfly thing? Yeah. Okay, so we've commissioned this butterfly mural to be painted on a wall on Nashville and put clues about the song and the new music in the mural. So I’m going to show up. The butterfly mural is painted by Kelsey Montague, who painted one of my favorite murals in New York. And let’s go see what happens."

Swift’s admission that the mural contains “clues about the song and new music” seems to be quite a clear confirmation that a T7 release is upon us. The artwork itself features a number of breadcrumbs that Swifties are all over: text above Swift’s head reads “Me!” (perhaps a song title?), it features three cats (perhaps a reference to a possible addition to Swift’s feline family?), and the Nashville location, along with Swift’s return to a princess-y, pastel aesthetic, could imply a return to country music. Swift also announced that she’ll be interviewed by Good Morning America anchor Robin Roberts tonight.

So… @kelseymontagueart helped me pull off the best surprise clue reveal today in Nashville!! Thank you to everyone who showed up, I’ve never been more proud of your FBI level detective skills. Next clue: I’ll be joining the magnificent @robinrobertsgma for a chat tonight on ABC live from Nashville ???????

But there’s more–with Taylor Swift, there’s always more. A certain segment of Tumblr-literate Swift superfans have always pushed a belief in “Kaylor,” a deeper connection between Taylor Swift and her one-time supermodel bestie, Karlie Kloss (it’s rumored that the two are no longer close). And the butterfly motif has Kaylor truthers in a tizzy. Mural artist Kelsey Montague has a segment on her website that includes images from Kloss and Swift’s joint 2015 Vogue cover–and she drew butterfly wings on the pages. And then there’s this.