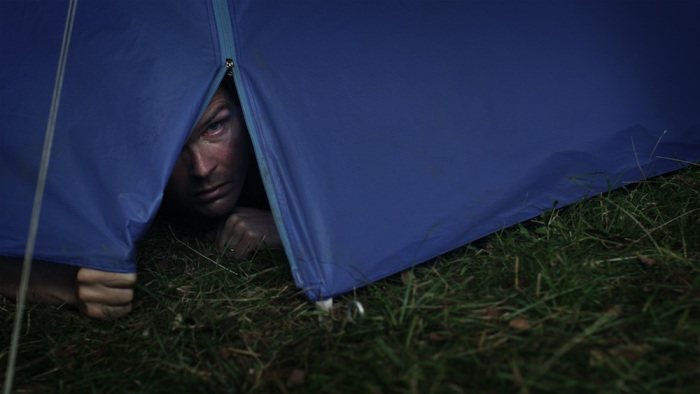 When “Koko-di Koko-da” characters Elin (Ylva Gallon) and Tobias (Leif Edlund) discover their daughter Maja dead on her eighth birthday, they think life couldn’t get worse. Shockingly, it can. The film jumps ahead three years to the couple’s miserable camping holiday, which gets interrupted by three psychopaths — a dandy in a bowler hat, a big-haired girl, and a giant — who kill them, over and over again, with guns, knives, fists, and a very hungry dog. The wicked murderers have no motive. They’re just inevitable death — as is all death — no matter how hard people like Elin and Tobias and, well, all of us try to escape.

Writer-director Johannes Nyholm’s fable about grief is at once brutal and childlike, a horror-show that hums along to a nursery rhyme that gives “Koko-di Koko-da” its name. Not that children should be allowed anywhere near Nyholm’s bloody nihilism, where even his handmade cartoons of a bunny family bouncing around a monochromatic forest could give a kid nightmares. Nyholm uses every tool to make people anxious, from the way Elin rages at Tobias for buying her the wrong ice cream flavor to the buzzing mosquito sounds he adds to their tent for an extra twist of tension. Early in the film, he ends every scene with an abrupt bang. Later, when the couple is yet again captured by the fiends, he looks down on the tableau from an agonizingly still aerial shot to underscore the futility of giving the killers the slip.

“Koko-di Koko-da” is heavy with dread and loss. Unlike the characters in other infinite-loop flicks like “Groundhog Day” and “Happy Death Day,” the doomed duo don’t get smarter with each do-over. Husband Tobias just gets jumpier, like a deer who senses hunters in the woods. He doesn’t, however, get nobler. The first time the trio arrives at camp, he cowers in his tent while the gargantuan strongman (Morad Baloo Khatchadorian) slow-dances with his unconscious wife. In flashbacks, Nyholm shows us enough of the couple’s dysfunction that we’d almost — almost — forgive Tobin for leaving Elin behind. But like the death of their daughter, they’re once more forced to face death together, without much trust that they’ll ever again be a united team.

Danish audiences will get a kick out of the stunt casting of ’60s rock star Peter Belli as the most talkative murderer. And yet, even they might retch at a scene where he sings “Yummy, Yummy, Yummy,” a chart hit from the same period when Belli was opening for the Beatles, mostly because of an obscenity he’s commanded the dog to do. In that low moment, Nyholm chooses shock over substance. Otherwise, the film avoids gross-out shivers in favor of the quiet torture of expecting death behind every tree, and a score that rattles the nerves with chimes and clocks, as though Elin and Tobias are just the dolls belonging to a sadistic child, which is one way of describing the relationship between an actor and certain directors. (Nyholm may be one.)

In this heightened allegory, everything is mossy with symbolism, even a shot of a spider weaving a trap. Nyholm could make a great, purist horror film if he was interested. He can definitely set a mood. His forest is so thick with suspense, he get a surprised scream just from letting loose a white cat. (It’s not entirely clear what the cat means, though one wishes it had a bigger role.) “Koko-di Koko-da” feels at once too textured and too thin. Perhaps, Nyholm might counter that life is the same — significant and disposable in the same breath. He forces us to face that death will eventually catch us all, and that grief can kill the soul while you’re still alive. Still, Elin and Tobias keep fighting to exist. And as grim as this movie gets, there’s something beautiful in that.

Helen Mirren and Laura Harrier amongst best dressed at the DGAs

‘Spider-Man: Into the Spider-Verse’ Swings Off With Seven Annies, Including Best Feature
World News