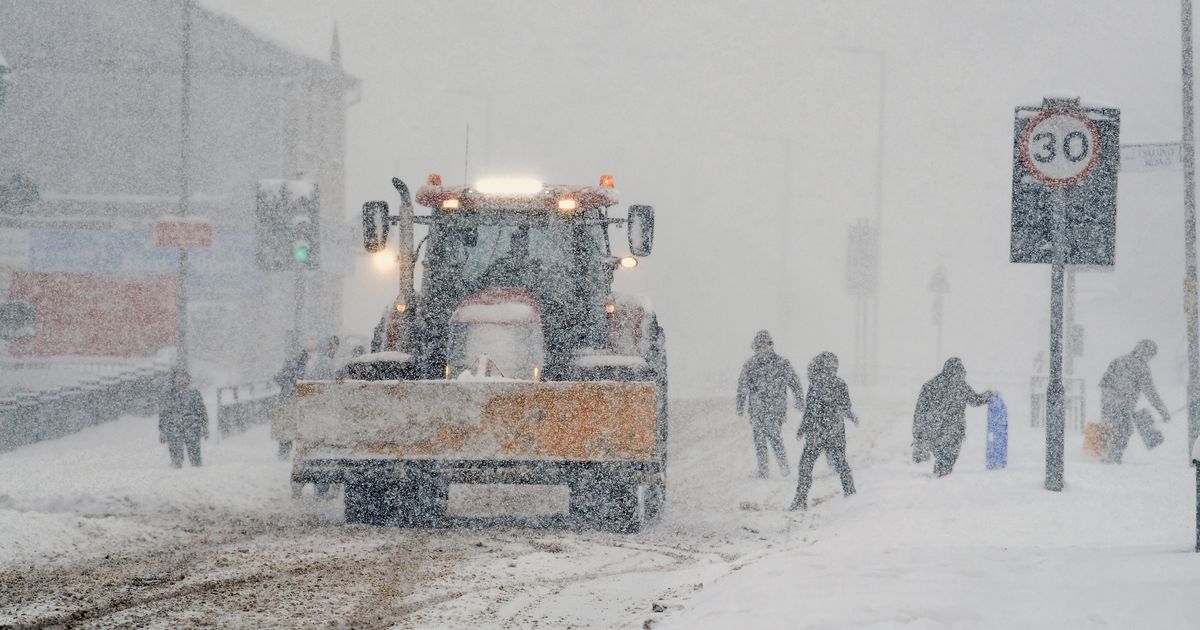 Amber and yellow weather warnings are in place across much of the UK on one of the last big shopping days before Christmas.

The icy blast is expected to spark travel disruption and power cuts – with the Met Office warning of a ‘danger to life’ in some areas.

The weather service says freezing rain will likely lead to "widespread ice", which could cause falls, dangerous driving conditions and black ice.

Only the South East of England is not covered by either weather warning, although forecasters say the area will still see some heavy rain.

Is it snowing in your area? Send your pictures to [email protected] It has issued an orange alert for the entirety of Ireland, warning of wind gusts up to a staggering 80mph and persistent, heavy rain.

For the UK, the Met Office has issued a series of warnings stretching from Land’s End to the Shetland Islands.

A yellow warning of heavy rain and strong winds up to 70mph is in place for Northern Ireland, south-west England and South Wales until 6pm.

Early this morning, winds of between 40mph and 50mph were beginning to be recorded in the region.

A further yellow warning of snow and ice that covers nearly all of England and Scotland will run for 24 hours from 9am today.

Further amber warnings of hazardous ice (covering the East Midlands, North of England and southern Scotland) and prolonged, heavy snow (covering central Scotland, Highland and Grampian areas) are in place from this morning through to tomorrow morning.

While freezing rain is expected to result in the "rapid development" of ice, heavy snow and blizzards could result in travel delays.

There may also be strandings on affected roads, forecasters say.

Met Office forecaster Simon Partridge told the Press Association: "If you’re not under a snow and ice warning you’re probably under a wind and rain warning.

"The good thing is that Deirdre is expected to clear out the cold air and become much milder across the weekend."

Freezing rain, a "rare" weather event for the UK, is forecast from the southern Pennines up to central Scotland.

"The problem is it freezes instantly on contact with cold surfaces, covering them with hard, clear ice," Mr Partridge said.

"That means power cables can be covered and supplies can be interrupted if they are brought down by the ice.

"There can also be issues with untreated roads."

Today is set to be one of the busiest festive shopping days of 2018.