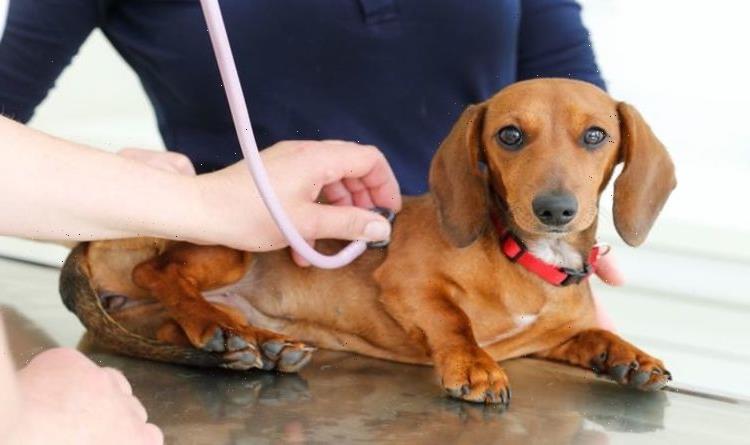 Stop sharing bed with your dog: Untreatable superbug may kill 10 million a year

The Yorkshire Vet: Peter discusses his ‘concern’ over scrubs

The mcr-1 gene is already estimated to kill 700,000 people a year across the world and is believed it tranfers from dog to owner and even potentially from human to animal. If left unchecked, the gene which was first identified in China 2015, is predicted to kill 10 million a year by 2050. Scientists have voiced their concerns that domestic dogs are more likely to harbour mcr-1 due to their close contact with humans.

Dog baskets are also a hotspot risk areas as the gene is harboured in the gut and transported via microscopic fecal particles.

A study at the University of Lisbon discovered that in two of the households where dogs had tissue infections, the mcr-1 gene was present in both the dog and owner.

Fecal samples was taken from 126 healthy people living with 102 cats and dogs in 80 households over the two years up to February 2020.

Results confirmed that eight of the dogs and four humans were found to be harbouring bacteria including mcr-1.

Three of the dogs appeared to be healthy, the others having tissue or urinary tract infections.

The study was presented at the European Congress of Clinical Microbiology and Infectious Diseases conference this weekend.

Experts said that argiculutrual regions that use colistin, particularly southern European countries, will be less likely to contract the mcr-1 gene.

Dr Juliana Menezes, who led the research, said: “Colistin is used when all other antibiotics have failed, it is a crucial treatment of last resort.

“If bacteria resistant to all drugs acquire this resistance gene, they would become untreatable, and that’s a scenario we must avoid at all costs.

“We know that the overuse of antibiotics drives resistance and it is vital that they are used responsibly, not just in medicine but also in veterinary medicine and in farming.”

A separate study also revealed that owners who feed their pets certain types of raw dog food containing high levels of colistin is a major source of antibiotic-resistant bacteria.

For years experts have warned that too much colistin can lead to more mutant genes meaning the drug will be ineffective on humans.

Researchers at the University of Porto analysed samples from a range of types of dog food, finding that 54 per cent contained the bacteria Enterococci.

This means a quarter of the samples with Enterococci were resistant to linezolid, another last-resort antibiotic.

Dr Ana Freitas, who conducted the research, said: “The close contact of humans with dogs and the commercialisation of the studied brands in different countries poses an international public health risk.

“European authorities must raise awareness about the potential health risks when feeding raw diets to pets and the manufacture of dog food, including ingredient selection and hygiene practices, must be reviewed.

“Dog owners should always wash their hands with soap and water right after handling pet food after picking up faeces.”

How old is Catherine Zeta-Jones? – The Sun
World News