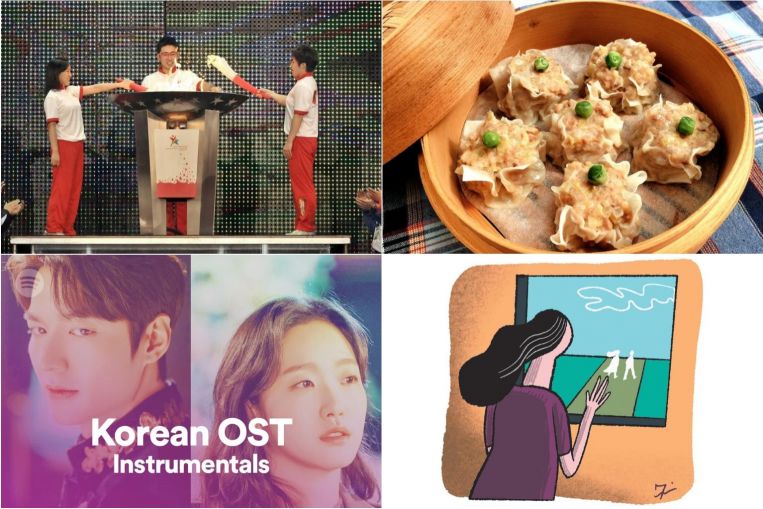 Today marks the opening ceremony of the inaugural Asian Youth Games (AYG) in 2009.

For a bite-size snack that you can also serve up as a dish for lunch or dinner, try making these Japanese-style shumai. Like ramen and gyoza, shumai is a Japanese food item with Chinese origins.

In the book Overseas March: How The Chinese Cuisine Spread, published in 2011, writer Naomichi Ishige notes that in the late 19th century, Japan’s port cities of Kobe and Yokohama had Chinatowns, but Chinese food was not yet popular with the Japanese.

Music streaming service Spotify has expanded its K-pop offerings with 13 new and revamped playlists on its K-pop Hub.

Its Twitter channel (@SpotifyKDaebak) has launched a personality quiz to direct users to a playlist that best suits their character and habits.

These playlists include original soundtracks from popular South Korean dramas to R&B and hip-hop tracks.

4. 30 Days Of Art With NAC: The Children by Yu-Mei Balasingamchow

After eight months, her children were coming home. They were rotating between services – her son from military to healthcare, her daughter from healthcare to construction – and their medical reports were clear, so they could spend one weekend with immediate family before their next posting.

She had to be tested too, to confirm that she didn’t have the virus. There were still inexplicable community outbreaks, and no vaccine or reliable treatment. She was relieved to get a negative result. It meant she could hold her twins again, not just talk to a screen or send haptic emoji, which simulated affection but felt like sandfly bites on her skin.

Her children arrived on Friday, whipping off masks and gloves to hug her. They were muskier, leaner, louder. On video calls they had let her mother them: Are you eating enough? Is there enough protective gear? (So many rumours, also about shortages of rice and filtration tablets.) Now, she realised, they were adults with their own views of the world.

Thomas Beattie came out but worries for anyone following his lead

'90 Day Fiancé': Brittany Banks Reveals the Details of Her Relationship with an 85-Year-Old Man
World News