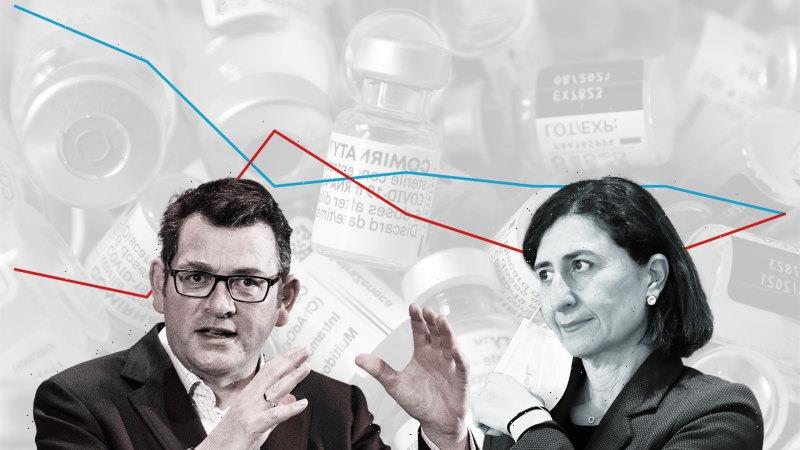 The federal government will wait until the final weeks of this year to reverse a vaccine boost for NSW as Labor premiers accuse Prime Minister Scott Morrison of favouring his home state by giving it more than its fair share of Pfizer doses.

With some states furious over the special treatment, new figures confirm NSW has received more Pfizer doses than its share of the population, including a significantly greater volume to hundreds of GPs and primary care clinics.

Other states and territories will be sent higher Pfizer supplies to reverse the gains for NSW but the adjustments are not expected to start until November because of the threat from soaring coronavirus case numbers in the country’s biggest state.

Health Minister Greg Hunt said other states and territories would see the benefit of higher allocations to balance the NSW gains over time but it would be “almost unimaginable” to ignore a state in need in the same way states gained help during floods, fires, droughts and cyclones.

“As we’ve had outbreaks, we’ve prioritised those areas to save lives,” he said.

The figures show the federal government sent 12.2 million Pfizer doses to the states and territories over the seven months to the end of August in three programs comprising 8.4 million for governments, 817,000 for aged and disability centres and 2.7 million for GPs, pharmacies and primary care.

NSW received 35.6 per cent of the Pfizer doses across the three programs, higher than its 32 per cent share of the population, as a result of federal decisions to give it more doses to combat the outbreak that began in June.

Victoria received 23.8 per cent of the total, below its 25.9 per cent share of the population according to the latest Australian Bureau of Statistics population figures.

Victorian Premier Daniel Andrews blasted the federal government on Tuesday for leaving his state to run an “egg and spoon race” on vaccinations while NSW Premier Gladys Berejiklian did better, arguing this had been done without full disclosure to the states and territories.

“Some don’t like to see this as a race, but a race it surely is. What I did not know was that Premier Berejiklian is in a sprint while the rest of us are supposed to do some egg and spoon thing.”

Mr Hunt promised 1.7 million additional doses for all states and territories next week from deals with the United Kingdom and Singapore in recent weeks, saying they would be shared on a per-capita basis.

“Occasionally, I have sensed that some people are looking for a fight. We’re not. We want to work with everyone constructively,” he said. 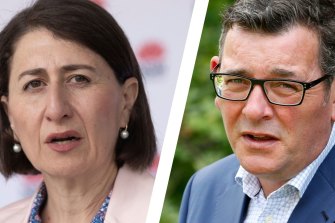 Victorian Premier Daniel Andrews (right) says NSW Premier Gladys Berejiklian (left) is in a “sprint while the rest of us are supposed to do some egg and spoon thing”.Credit:Christopher Pearce/Darrian Traynor

The federal figures show the strongest benefit to NSW was in primary care after the federal government’s vaccine taskforce, led by Lieutenant-General John Frewen, launched a “rapid on-boarding” program to counter the outbreak by giving more doses to 260 GPs.

This meant NSW received 1.2 million, or 43.1 per cent, of the total for the primary care program in the seven months to the end of August, well above its population share of 32 per cent.

The NSW government received 2.9 million Pfizer vaccines, or 34.5 per cent of all the doses that went to state and territory authorities for hospitals and vaccination hubs.

NSW received 274,452 doses for aged care and disability care centres, or 33.5 per cent of the total.

The federal figures showed Victoria also gained from special allocations and moved ahead of NSW in June to receive more Pfizer doses overall.

Victoria at some point received 300,000 more Pfizer doses than its projected allocation because of its rising case numbers, bringing forward shipments it was meant to receive later.

“It’s like getting an advance on your pay – you get it upfront and then give it back later,” one federal source said of the decisions to help some states during outbreaks.

The approach means all states will receive a per-capita distribution of the Pfizer doses over time but that the adjustment will not be immediate because of the pressure from rising cases in NSW.

The biggest increase to NSW came on August 15 when Mr Morrison announced a shipment of 1 million doses from Poland and said 530,000 would go to NSW. This was about 210,000 more than NSW would have received on a per-capita allocation.

Mr Morrison said on August 15 this decision had been based on advice from Chief Medical Officer Paul Kelly about the risks in NSW.

Over the past week, however, Mr Morrison has said that other additional doses, such as 500,000 from Singapore and 4 million from the United Kingdom, would be allocated on a per-capita basis.

The federal figures also show an allocation of 289,692 doses of Pfizer to the Australian Defence Force and operations in Papua New Guinea.

South Australia received 565,230 doses for its state government program, 63,864 for aged care and disability care and another 127,140 for primary care.

This meant the state received 756,234 doses of Pfizer over the seven months to the end of August, or 6.2 per cent of the overall program. This was slightly less than its 6.9 per cent population share.

Tasmania received 244,530 doses for its state government program, 36,408 for aged care and disability care and another 36,210 for primary care. This meant it received 2.6 per cent of the total Pfizer allocation, above its 2.1 per cent population share.

The Australian Capital Territory received 218,958 doses for its state government program, 12,492 for aged care and disability care and 36,270 for primary care. This meant it received 2.2 per cent of the total, above its 1.7 per cent population share.

Queensland Premier Annastacia Palaszczuk said she understood the need for NSW to receive more vaccines as it was “going through a really tough time” but she rebuked the federal government for criticising states.

“Please don’t pick a fight when another state is getting more vaccines,” she said.

Mr Hunt noted, however, that Queensland had not taken as many AstraZeneca doses as it could have.

“I would point out that with regards to Queensland, that their 78 per cent ordering of their state entitlement is the lowest of any state and territory. In particular, they have a 37 per cent order rate of AstraZeneca,” Mr Hunt said.

“To Victoria’s credit, they’ve done an outstanding job with AstraZeneca. They’ve made it a feature of their rollout, and so I applaud that and recognise and respect that.”

The federal figures for AstraZeneca show NSW received only 17.6 per cent of the 1.8 million doses sent over seven months to the end of August to state and territory governments for state-run hubs. Victoria received 45.1 per cent, reflecting a strong campaign to use this vaccine.