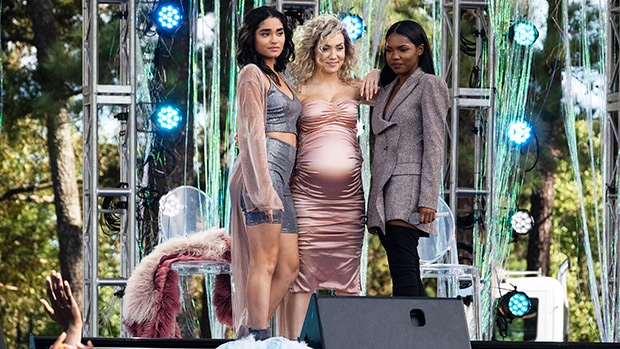 The ‘Star’ fall finale is going to be E-P-I-C. HL spoke EXCLUSIVELY with showrunner Karen Gist about that baby daddy surprise coming up, Carlotta and Cassie evolving relationship, and more.

The Star season 3 fall finale airs Dec. 5 at 9 p.m. on FOX. The promo teased that Star will finally be giving birth to her baby, and there will be a baby daddy surprise. What could this mean for Star and the other characters? Plus, what can we expect in regards to Carlotta and Cassie’s relationship, as well as Simone and Alex’s next steps.

HollywoodLife went straight to showrunner Karen Gist to get the EXCLUSIVE scoop on what’s ahead in the fall finale and coming up in 2019. Get ready, because Star is about to turn up the drama even more. Check out our Q&A below!

How is this baby daddy surprise going to impact Star and the show overall?
Karen Gist: Well, it will impact Star in that she is finally in a really healthy in a lot of her relationships, so it’s going to shake up a lot of things for her, both personally and professionally, and make her kind reset the table for the feast in her life.

How is Star going to be as a mom?
Karen Gist:  Star has said that she wants to give her baby everything that she didn’t have. But she still has the demons of her mom on her back. She still has this desire to be Star. She’s going to have to deal with her desire to be famous, to be this great artist, to make sure she doesn’t make the same mistakes that her mom made. She’sgoing to have some slip-ups along the way but she is madly in love with her baby, so we’ll see her grow as a woman as well in her new role and how does that compete with her drive?

Are Carlotta and Cassie headed in a better direction in the wake of Carlotta reaching out to her younger sister about Xander?
Karen Gist: Their relationship, like most sisters, will continue to have its ups and downs. Yes, they have had kind of a “come to Jesus” because a secret has come out about their father, so there is a closeness. But Cassie’s Cassie, and she’s a little bit crazy and a little bit cuckoo, so she’s always going to be that younger sister who gets out of pocket, who Carlotta has to reel back in. Their relationship will be closer, but there’s always conflict and tension to be had between those two.

Cassie chose Carlotta in a sense when it comes to Xander. Is Xander going to take that sitting down?
Karen Gist: No, he’s not. Xander is Xander, and he is our delicious bad guy. We’re going to continue to watch that play out. Cassie’s met her match in Xander, so they go at each other for a bit. We’ll have some fun with it in the second half of the season in terms of whose going to win that war.

Despite the tension and the toxicity, there seems to be genuine feelings between them.
Karen Gist: I think that comes from the fact that they’ve known each other since they were 15. They were both on the streets together. There’s a shared history, and she sees herself and finds all of her self esteem in how he sees her, and she paints this picture about who he is. I don’t think she can really see the truth, so she’s going to have to deal with that in the second half of the season.

What can you tease about what’s next for Carlotta and her father?
Karen Gist: We’re just starting this great arc with Ben Vereen. That scene at the end of episode 8 that was so amazing for Carlotta was just the beginning of her opening up this old wound, forgiving herself, for holding this secret in, and confronting this awful thing that happened to her. That will bring the sisters closer. They do stand by each other in regard to what the father did.

Carlotta protected Cassie, so that has to mean something.
Karen Gist: I think Cassie wants and desires Carlotta’s acceptance and love, and that’s been her arc in the first half of the season. What she learns in episode 8 is that the whole time Carlotta’s been protecting her and has loved her. That opens her eyes in a new way and changes their sisterhood in, I think, a great way.

Where does Simone and Angel’s relationship go from here after their heart-to-heart?
Karen Gist: They are in a decent place. What we’re really excited about in the second half of the season is watching Simone grow up a little bit more and come into her own. She will grow into her womanhood, so how will this play out in her relationship? Especially in terms of when she starts to get a little bit more fame, while she wants a man who wants a smaller, simpler life. How does that play out in their relationship? Which side does she pick? That’s where we’re going to go with her. She grows up a lot in the second half of the season and stands up for Angel. She is the character that we’re using to make a lot of our political statements. She’s no longer the little girl we met in season one.

With Alex, there’s a lot of romantic tension with her Derek and Noah. What’s next for her?
Karen Gist: We’re really using this season to see the more vulnerable side of her. I think the idea of this really privileged girl who has everything, is kind of a lie. We’re watching her build herself up well. IN the same way that Simone becomes a woman, so does Alex. She chooses herself. She stands on her own two feet professionally, especially. In the midseason finale, she’s finally going to strike out on her own as a solo artist and we’ll see whether that’s a goo thing or a bad thing for her. But she’s definitely a stronger character trying to get out from her father’s shadow and that’s a big part of her arc for the seacond half of the season. In terms other relationship with Derek, we”’ continue to watch that grow and we’ll see how her new fame plays out in this relationship that she is kind of the center of her world.

Is this the most annoying video EVER?
World News