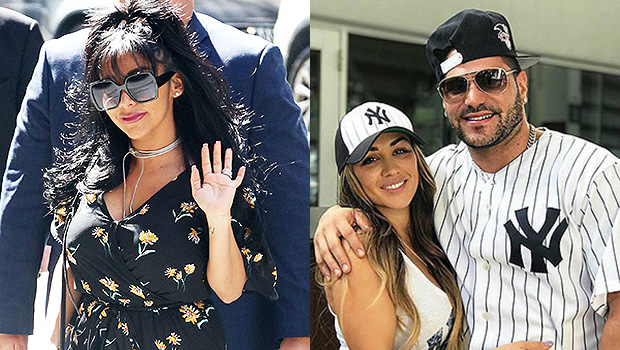 Snooki Hints Ronnie Ortiz-Magro & Jen Harley May Be Over: He’s Not Getting Married ‘Anytime Soon’

Could Ronnie Ortiz-Magro and Jen Harley’s breakup be for good? Nicole ‘Snooki’ told us exclusively that she doesn’t think he’ll get married ‘anytime soon!’

The Jersey Shore cast have all grown up since the MTV phenomenon first aired in 2009. They’ve gotten married, had babies — the whole nine yards. But there are still a few GTL holdouts that Nicole “Snooki” Polizzi believes won’t join them in walking down the aisle “anytime soon!” Namely — Ronnie Ortiz-Magro. Ronnie, of course, is in the middle of another brutal “off again” period with Jen Harley, the mother of daughter Ariana Magro. While this volatile couple continues to break up and make up, it may be for good this time. It may be the same for the other Jersey Shore dudes!

“I think Mike [‘The Situation’ Sorrentino] is the next to have a baby, hopefully,” Nicole told HollywoodLife EXCLUSIVELY during an interview about her new store, The Snooki Shop in Madison, NJ. “Him and Lauren [Pesce] definitely want to have kids, so hopefully they’ll get knocked up soon. The boys — Pauley [D], Ron and Vin [Guadagnino]  — I don’t think they are going to get married anytime soon.” So, why does she think they aren’t saying “I do” in the new future? “They’re bachelors! They just want to do them. Let them have fun and enjoy their lives. I don’t think they want to settle down anytime soon.”

She would know; the group are legitimate best friends and closer than ever, especially after filming Jersey Shore: Family Vacation together. “Just like any other best friends would. We’re always there for each other,” Nicole told us. “We talk every single day constantly in group chat just to make sure everyone’s good. Life’s a bit*h sometimes and sometimes we all go through it, so it’s amazing to be able to trust each other with our private lives and be honest and have somewhere to go to talk to someone. That’s basically what we do for each other.”

That’s what friends are for! Presumably, she means that includes helping Ronnie through his ongoing drama with Jen. Right now, their fighting has reached an all-time high, with Jen accusing him of being a narcissist and allegedly robbing her. Meanwhile, Ronnie has posted graphic photos of his bruised and bloody face, saying it’s because she allegedly threw an ashtray at his head. This isn’t the first time Jen has been accused of physical abuse, but they keep going back to each other despite their problems. Is Nicole’s belief that he’s not getting married anytime soon and wants to remain a bachelor means this is finally it for the troubled couple?

Regardless, Nicole knows that baby Ariana is Ronnie’s priority. He’s a good dad! “Ron is so cute with his little baby,” Nicole said. “They’re literally twins! Ron has surprisingly always been the best one with kids because growing up, he always had young kids around him and was around his cousins and stuff. So, he was the most comfortable with kids out of all of us.” So sweet!

You're the Worst: Were You Confused by the Premiere? The Creator Explains