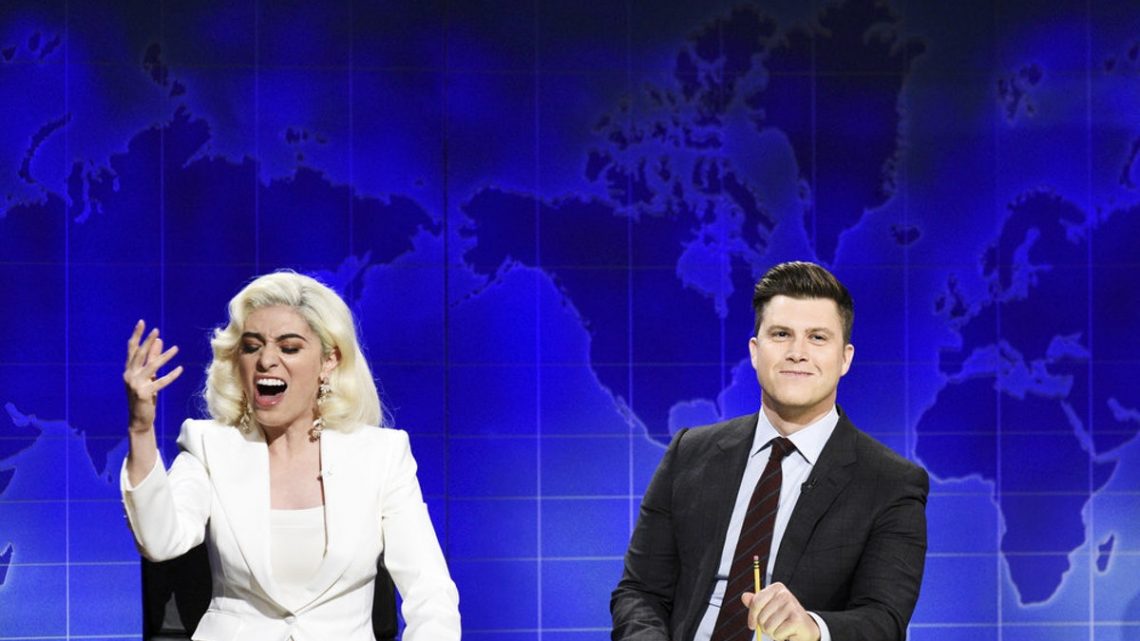 If every Saturday Night Live featured Melissa Villaseñor singing "Shallow" from A Star Is Born, even when this year’s Oscars are over, nobody would complain. Her Gaga is a gift that keeps on giving. After debuting the killer impression on Weekend Update in the previous episode, Saturday Night Live brought back Melissa Villaseñor as Lady Gaga for a Family Feud sketch that included other comedic takes on this year’s contenders.

"If 99 people are surveyed," Villaseñor says as Gaga, "you just need one person to believe in you to win the game." Will these jokes about 100/99 people in a room ever get old? Technically, 100 people are surveyed on Family Feud, so the joke is grounded in reality. "It works if you dream it," the Gaga character then insists, before diving right into the famous "Shallow" riff.

The Family Feud parody teamed "Oscar newbies" Rami Malek (Pete Davidson), Mahershala Ali (Chris Redd), Gaga, and Bradley Cooper (Kyle Mooney) — who, while not an Oscar newbie, is contractually obligated never to leave Gaga’s side, according to her. "I saw this woman at the Super Bowl half time show," says Mooney as Bradley Cooper, "and I had this wild thought. I thought maybe she could play a singer.’"

They played against veterans including an intense Glenn Close (Kate McKinnon), Spike Lee (Don Cheadle), fellow Star Is Born nominee Sam Elliott (Beck Bennett), and Olivia Coleman (Cecily Strong) from The Favourite. You can watch the sketch already, below:

It’s truly such a spot-on impression. Not only does Villaseñor nail Gaga’s singing voice and singing face, this time around we got to hear her speak as Gaga as well — and it’s pretty perfect.

Previously, Villaseñor’s Gaga impression was kind of a meta joke on Update. She came out to talk to Colin Jost and Michael Che about the Grammy awards as Melissa, unabashedly dressed as Lady Gaga, and did an impression of "Shallow" from A Star Is Born — which she claimed to have just discovered. Jost implied that she had been trying to get her Lady Gaga impression on the show, and was trying to sneak it in. This time, she’s just playing Gaga from the get-go. She got her wish!

Thompson, emcee-ing the sketch as Steve Harvey, also took a jab at problematic concerns surrounding Green Book, implying that he walked out of the film after he saw Ali’s character teach Viggo Mortensen’s character how to eat fried chicken.

And that wasn’t the only attention SNL paid to this year’s seemingly unending Oscar drama. During Weekend Update, Beck Bennett revived his character Jude — a free spirit who "see things differently" — to comment on awards season. ‘I’ll watch and scoff," he says. "They all ask ‘who are you wearing?’ What I want to know is who are you being."

There won’t be any more Saturday Night Live episodes before the Academy Awards, which is a shame. Each days brings baffling information about which categories will be presented when, what the musical performances are going to be, and how the show will go on without a host. That begs for comedy. At least Villeseñor’s Lady Gaga impression has finally been unleashed. We’re far from the shallow now!

How Much Does Prince Harry and Meghan Markle's Frogmore Cottage Renovation Cost and Who Is Paying for It?