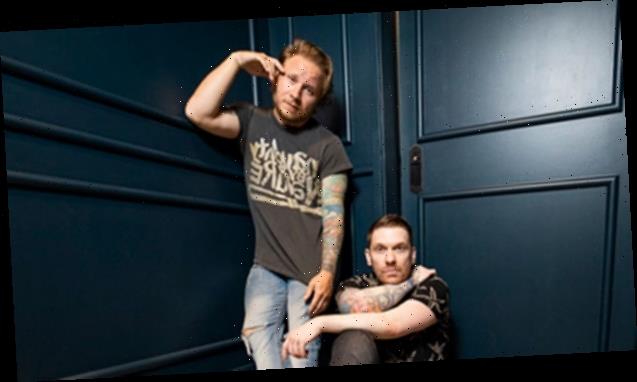 Just in time for Halloween, Smith & Myers are going as Billie Eilish. The Shinedown members have released a cover of ‘Bad Guy,’ and they tell HL why they wanted to pay homage to the ‘inspiring and impressive’ singer.

The best thing about a “Bad Guy” cover is that no two are alike, and Smith & Myers  — the duo composed of Brent Smith and Zach Myers, two members of rock band Shinedown – have shared their own take on Billie Eilish’s breakthrough hit. With nothing more but a guitar, some well-timed slaps, and a healthy dose of intrigue — Smith & Myers transform it into a haunting acoustic jam, a perfect addition to your Halloween playlist (though, for Shinedown fans, this will be a song perfect for any season.)

“I became a fan of Billie Eilish as soon as I heard ‘Ocean Eyes,’” Brent Smith tells HollywoodLife. “I find it inspiring, impressive and amazing that as young as she and her brother Finneas are they obviously have a musical bond. When I heard ‘Bad Guy’ for the very first time, I felt like I had heard a brand new style of fresh. I brought the idea to Zach to do the song, and he said ‘let’s go!!!’”

Smith & Meyers’ version of “Bad Guy” will be found on VOLUME 2, the second of two albums being released in October. Each album contains five original tracks along with five cover songs. The project includes “Not Mad Enough,” a song Smith & Myers wrote the night of George Floyd’s death about how it’s time for America to confront its own systemic racial injustice.

VOLUME 1 is set for release on Oct. 9, with the sequel hitting streaming services on Oct. 23. On VOLUME 1, the band offers their own dark, melodic takes on tracks by Post Malone (“Better Now”), INXS (“Never Tear Us Apart”) Amy Winehouse (“Valerie”) among others. VOLUME 2 will also see the band cover acts like Oasis (“Don’t Look Back In Anger”), Peter Gabriel (“Sledgehammer”) and R.E.M. (“Losing My Religion.”)

This project allows Brent and Zach to explore a different side of their musical interests, but don’t think that they’re leaving Shinedown behind. Quite the opposite. The band recently put out “Atlas Falls,” a song that topped Billboard’s U.S. Mainstream Rock Charts. It was the sixteenth No. 1 for the band. This broke the record for the most No. 1’s in the Mainstream Rock Song Chart’s 39-year history.

Trump wants to get back to working in the Oval Office: White House
World News