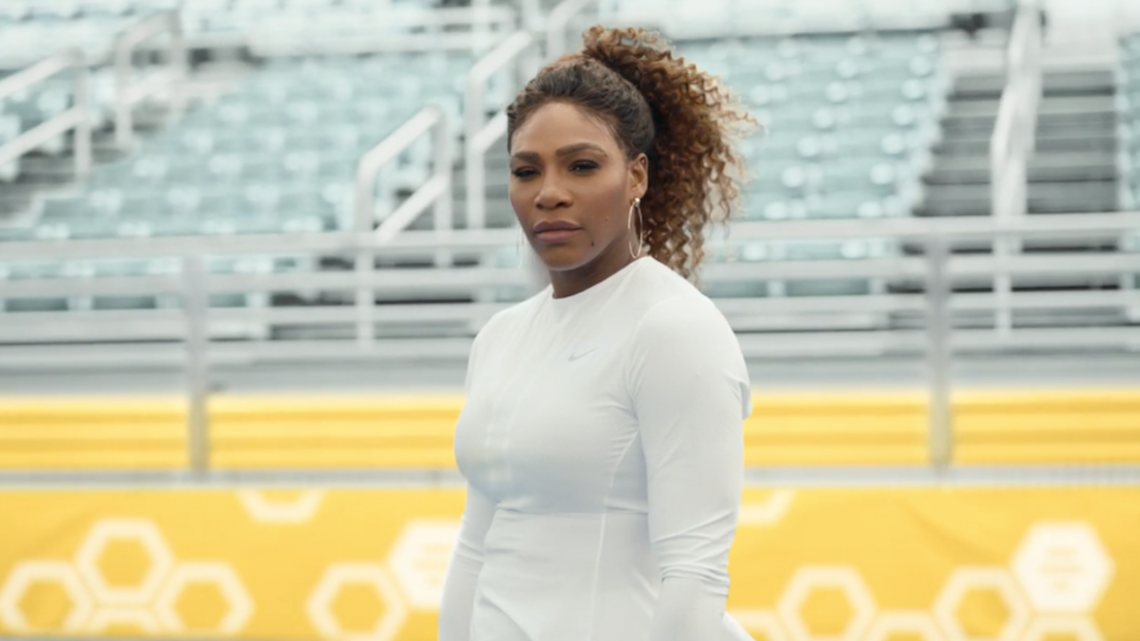 It’s almost Super Bowl Sunday, and whether you’re planning on watching the game, or you’re just in it for the Maroon 5/Travis Scott/Big Boi halftime show (both are acceptable), millions of people are expected to tune in. Of course, it’s never all about the football. The commercials are the best part! Don’t @ me. There will be plenty of entertainment Sunday night, but Serena Williams and Alexis Ohanian’s wedding photo in Bumble’s Super Bowl ad definitely stands out.

Really, Williams’ ad with Bumble (which you can watch here) stands out for many reasons, but the tiny glimpse viewers get into her wedding day is seriously adorable. The ad, which runs about 30 seconds, features Williams explaining why it’s important for women to make the first move — in your career, with your friends, and with your love life. Bumble is all about women making the first move (literally, men can’t message women until women message them first), so it makes sense that the brand would want to partner with a GOAT like Williams, who regularly advocates for equality. In a statement about the ad, Williams said, "I want women to feel empowered to find their voice and use the power within to create change, to lift each other up, and to never let the world tell us we can’t — because we can, and we will," AdAge reports.

The ad is very moving, but the photo of Williams and Ohanian on their wedding day was one of the cutest parts.

One year down a lifetime to go @alexisohanian

The photo, which was sitting on Williams’ desk in the ad as she works on her fashion line, showed the couple on their wedding day walking down the aisle after saying "I do." They’re holding hands, smiling wide, and looking sharp — seriously glowing. Williams stuns in her Alexander McQueen princess ball gown, complete with a cape. The wedding photo wasn’t the point of the advertisement, but the sentiment that women should make the first move in love goes to show that Williams isn’t afraid to go for what she wants, including Ohanian.

The couple met in Rome in 2015, when Williams was there for her first match in the Italian Open and Ohanian was speaking at the Festival of Media Global Conference. They met sitting poolside at their hotel, and Williams made the first move, inviting Ohanian to join her table of friends. She later invited him to join her and her friends for dinner that night. Basically, she’s got game (both literally and figuratively), and has made the first move in every uber-successful aspect of her life, so it makes sense that she’d be down to work with Bumble.

"The world tells you to wait; that waiting is polite and good things will just come," Williams says in a voiceover during the ad. "But if I waited to be invited in, I never would have stood out." It’s a powerful statement, and one that certainly echoes Bumble’s business model. Women shouldn’t have to wait to make the first move in any aspect of their life. Just freaking go for it.

Family day yesterday. @olympiaohanian was not having it though. @serena collection top.

According to AdAge, in addition to the adorable, sweet, and powerful commercial, Bumble is making February 4 "First Move Day." For every first move made on Bumble the week following the premiere of the ad, the company will donate to the Yetunde Price Resource Center, an organization the Williams sisters founded to help make sure that communities affected by violence have the resources they need to recover and thrive.

So, don’t be afraid to make those big moves! There’s nothing stopping you. If anyone’s an example of that, it’s Serena Williams. With her successful career, business ventures, philanthropy work, and adorable daughter and love story, you can pretty much rest assured she’s the authority on making big moves.