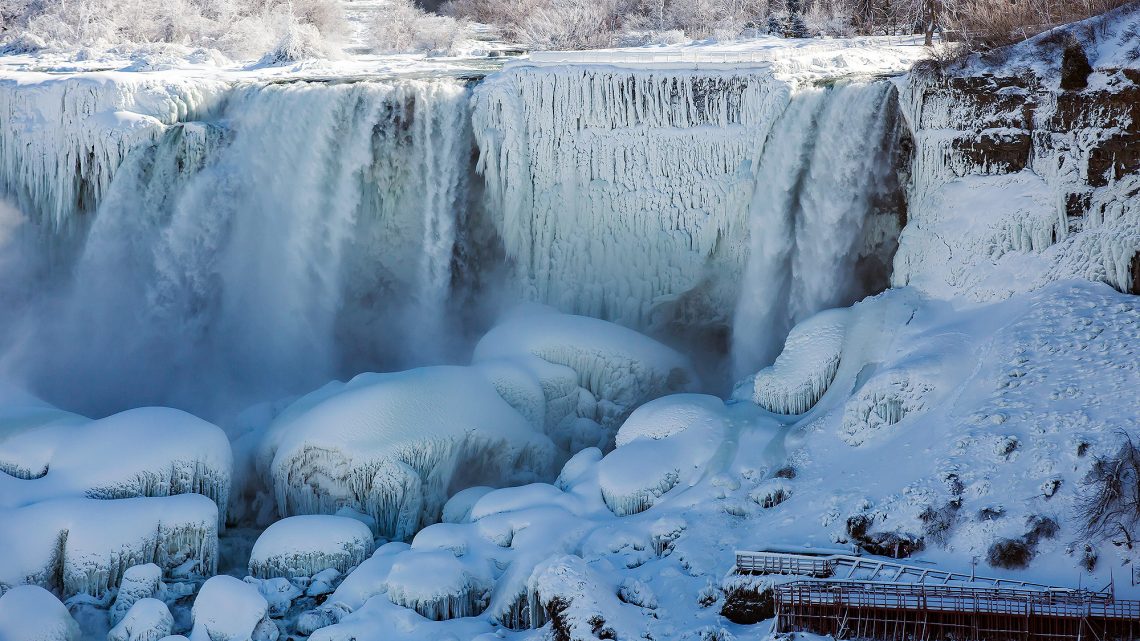 Record-breaking low temperatures are continuing to have a dangerous effect on parts of the U.S. — and leading to some extreme (yet beautiful) modifications in nature.

Amid news that Lake Michigan is freezing over, photos have been released of Niagara Falls — which straddles the Ontario and New York border — looking like more a scene from a holiday film than its usual roaring self.

As temperatures dropped below 0 degrees Fahrenheit surrounding the Falls, ice is now covering much of the natural wonder’s Bridal Veil, American and Horseshoe Falls on Thursday.

“What makes the ice buildup so dramatic and beautiful is that water can freeze as it’s going over the falls, creating a large collection of ice below that can be well over 40 feet thick,” Niagara Falls USA says of the general phenomenon, explaining that before 1964, “Ice could block the flow of water further up the river, reducing the volume of water on the US side of the Falls to the point of freezing.”

RELATED: Temperatures to Reach -50 Degrees in Some Parts of U.S.: Here’s How to Stay Safe in Extreme Cold

“This happened five times before steel ice-booms were added to prevent large collections of ice,” the site continues. “More recently, the frozen effect you’ve seen is similar to any other river or lake that freezes. Surface water and mist in the air turns to ice, but there is still plenty of water flowing.”

“When extreme cold hits for long periods of time, like the polar vortex events of 2014 and 2015, we can see massive collections of ice that make for famous ‘frozen falls’ photographs,” explains Niagara Falls USA, adding that “it’s common for ice to form on the river every winter.”

The site also insists it is not safe to venture onto the ice: “Almost a century ago, people were allowed to walk on the ice bridge and it became a regular part of the attraction in winter, however that changed when three lives were lost due to breakage in the ice.”


The Midwest, from the Dakotas to Western New York, is experiencing some of the coldest temperatures to hit the region in more than two decades, according to The Weather Channel.

As the area freezes, it’s important to keep safe. The National Weather Service says frostbite can set in with a wind chill of -20 degrees in 30 minutes. The colder it is outside, the faster the condition — which causes a loss of feeling and a white or pale appearance in extremities, such as fingers, toes, ear lobes or the tip of the nose — will set in.

These temperatures can also cause hypothermia, when a person’s internal temperature drops below 95 degrees. Seek help immediately if you or someone you know may have developed frostbite and/or hypothermia.