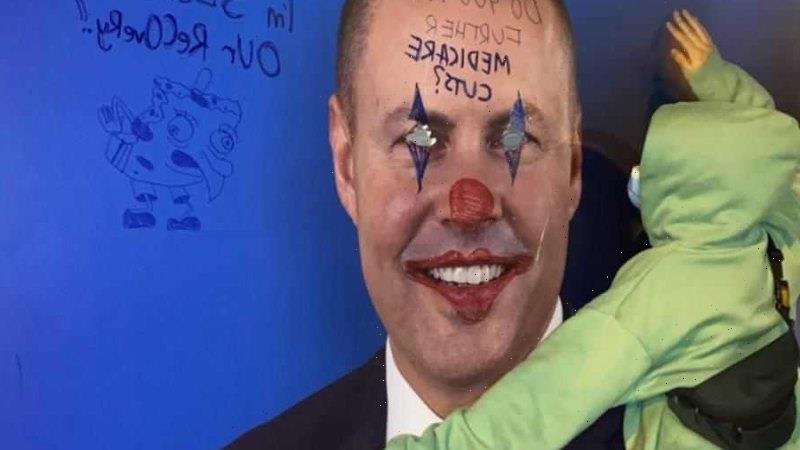 Security guards, swastikas and vandals on the previously sedate streets of Kooyong

Victoria Police have also been called to investigate a supporter of Frydenberg’s “teal” independent challenger Monique Ryan, who was caught in a social media video allegedly defacing a Frydenberg sign in the early hours of Tuesday. 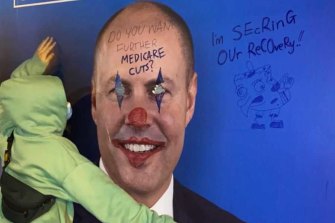 Now-unavailable Instagram image of a person allegedly vandalising a sign.Credit:Instagram

The on-the-ground campaign in the until-now safe Liberal seat has become increasingly acrimonious with a fortnight to go to the election and Frydenberg told The Age, “there appears to be a deliberate and targeted effort to vandalise my election boards”.

“It doesn’t go unnoticed that while on one side of the road my campaign boards are defaced, and on the other side of the road, the so-called independent’s board is left unscathed.”

But Ryan posted on Twitter on Friday saying her signs had been subjected to a “massive coordinated attack” overnight. She said A3 stickers – which included a picture of the candidate alongside Labor leader Anthony Albanese and the words “VOTE RYAN YOU GET LABOR” – had been stuck onto scores of her signs.

“This is expensive & well organised. We have reported it to the police & the AEC,” she wrote. 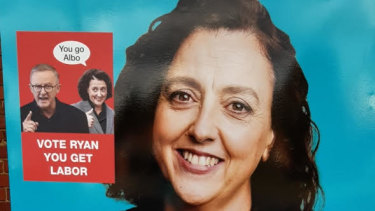 A photograph of an sticker posted on a Monique Ryan billboard linking her to the Labor Party.

Both camps in this campaign have accused opponents of damaging campaign material, which has turned the normally politically muted seat of Kooyong into a sea of blue and teal intersection billboards, real estate signs and shopfront posters.

From The Age’s observations since March, the vandalism disproportionately affects material produced by the Liberal Party.

Frydenberg has admitted he is at risk of losing his seat to the former director of neurology at the Royal Children’s Hospital, who has been described by Frydenberg as a “fake” independent. She struck back in a debate on Thursday, labelling the incumbent the “Treasurer for NSW” who had failed to provide a healthy economy or action on climate change.

Vision on a now-unavailable Instagram post, seen by The Age, showing a Ryan backer allegedly defacing the sign is the first evidence proving a supporter of either of the main candidates has engaged in vandalism. 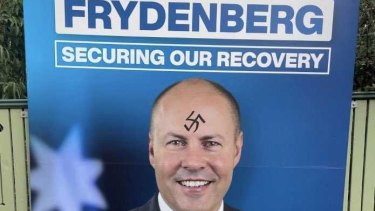 A Frydenberg poster with a swastika drawn on it.

The Age has spoken to a relative of the young woman who allegedly drew clown features onto a photo of Frydenberg. They confirmed the woman, who The Age has decided not to identify to protect her privacy, was enthusiastic about the election campaign and supported Ryan.

A spokesman for Ryan’s campaign said the woman who allegedly defaced the property was not registered in the campaign’s volunteer database. There is no evidence that she holds any formal role in the campaign team, which has raised about $1.4 million from 3000 donors and knocked on close to 8000 doors in Kooyong.

“In regard to vandalism of Mr Frydenberg’s campaign materials, all of Dr Ryan’s campaign volunteers are required to sign a code of conduct that includes a pledge not to undertake any activity which would place the campaign in disrepute,” Ryan’s spokesman said.

“Any volunteer who is found to have violated that pledge, or damaged the campaign materials of another candidate, will be removed immediately from Dr Ryan’s campaign.”

A police spokesman said detectives were investigating an incident on Glenferrie Road, Hawthorn. “It is believed the vandalism has taken place at various times and locations from February through to now,” the spokesman said, urging those who knew more to contact Crimestoppers.