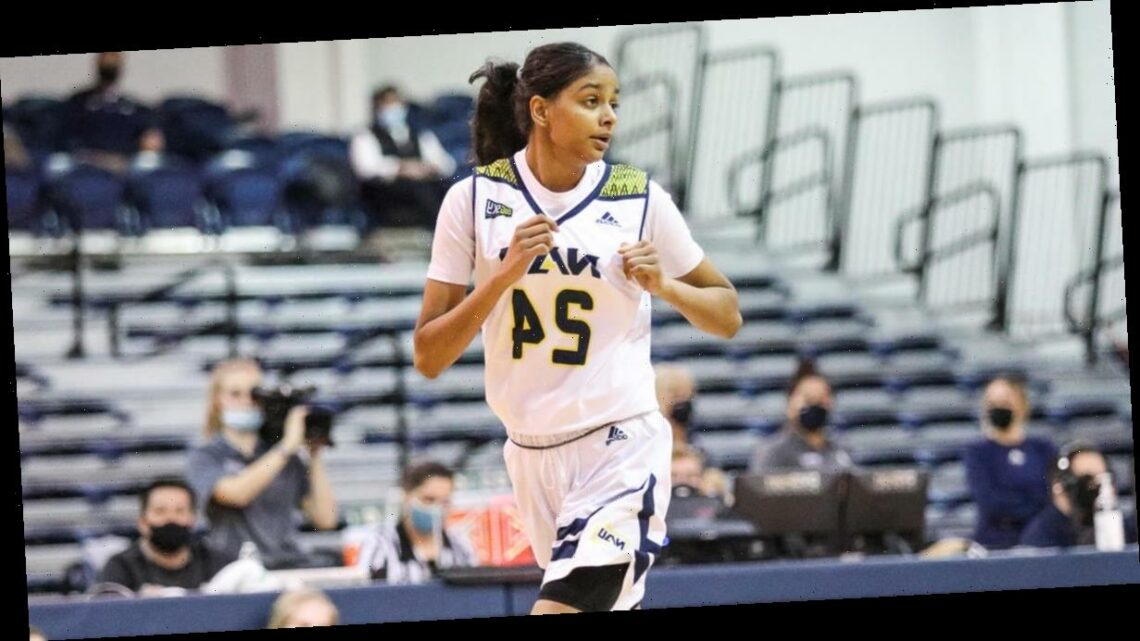 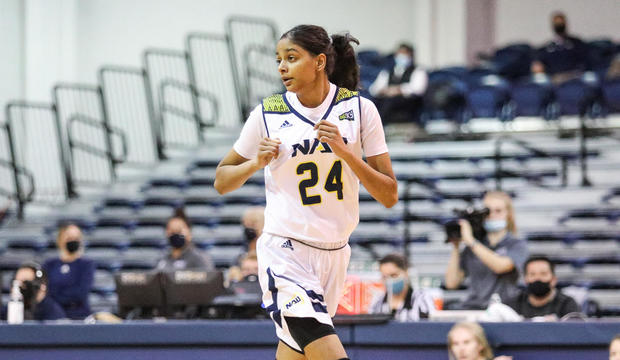 In Bangalore, India, a barefoot 12-year-old girl spent an hour cleaning dirt and grime off a basketball court. The air was musty from the mud and cow manure surrounding it — that’s how Sanjana Ramesh remembers 2014. She practiced with an orange ball that hardly resembled a real basketball, perfecting her dribble-drive and famous crossover that had boys her age falling to the ground, holding their ankles.

Her feet were riddled with blisters and her knees bloody from fearlessly diving after basketballs on the hard concrete — but she didn’t care. That court, and her determination, helped her become what she is today: the crown jewel of Indian women’s basketball.

Fast forward to 2021, Sanjana is over 9,000 miles away in Flagstaff, Arizona. She is a 6-foot-tall, gangly 19-year-old sophomore at North Arizona University and a member of the women’s basketball team. Sanjana is a scholarship player who doesn’t even do her own laundry anymore. She has an affinity for Cane’s chicken and craves the “Caniac Combo” whenever she can get her hands on it. She’s come a long way since she was a barefoot girl playing basketball on a dirty court.

Sanjana is an anomaly — she is just the second Indian-born woman to play Division I basketball and represents the changing of the guard between the new generation and the old, where the idea that academics aren’t the only avenue to success for Indians. On the court, she carries not only her own ambitions but the aspirations of young Indians who hope to play basketball at the next level.

“It’s not only about how I am performing,” she said. “Other people are watching me and trying to understand this all. I am trying to do the best I can, so I tell myself just do the best and everything else will follow.”

Sanjana follows Kavita Akula, a recent graduate of Grand Canyon University, who was the first Indian-born women’s basketball player to receive a scholarship. No Indian-born women have made it to the WNBA, and the same is true for men at the NBA level.

“I am a little nervous… because people look up to me and see what journey I am taking and how I am performing in tournaments and games,” Sanjana said.

Sanjana first started playing basketball against her older brothers  — never giving them an inch to score a basket, even at 12 years old. Throughout the years, she played games with reckless abandonment, diving after loose balls, hounding the opposing players on defense, and being a thorn on every offensive player’s side.

Her favorite memory? Her primary school team was trailing 20-2 when she entered the game off the bench. Her play injected a much-needed shot of dopamine into her lifeless team. She never glanced at the scoreboard and when she missed a layup in the closing seconds, she collapsed to the ground in disgust. Her teammates ran to her side in celebration and a confused Sanjana looked up to see that her team had won by 12 points. 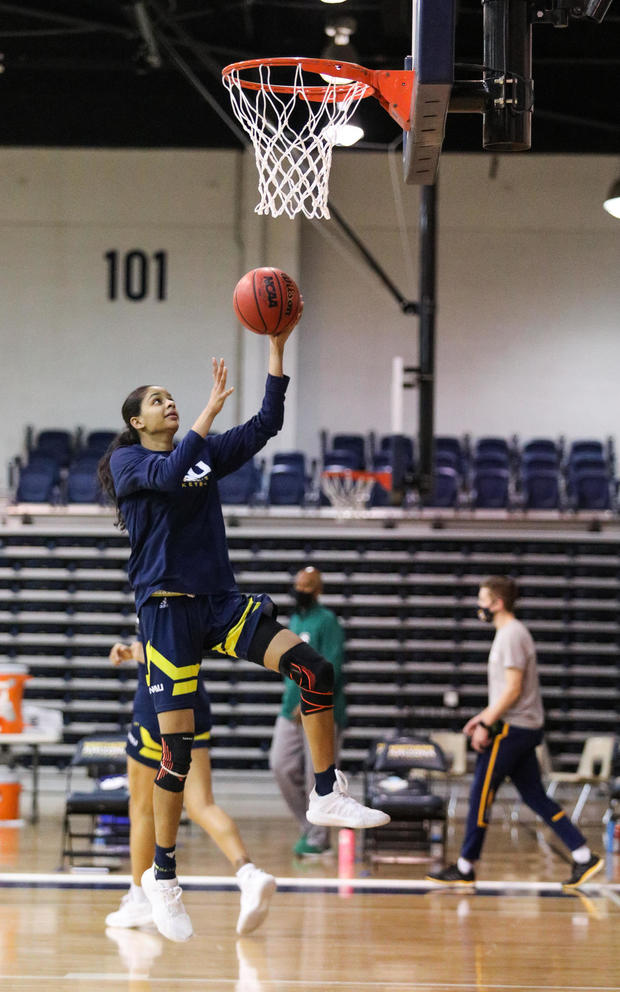 “I was like a mad dog out on the court that day,” Sanjana said.

Sanjana considers this a pivotal moment in her young career. She remembers seeing her name in the newspaper and thinking, “Maybe, I can actually play seriously.”

She credits her coach, Mohan Kumar, for pushing her to be great. He would send three players to guard her, forcing her to use every offensive weapon in her arsenal to get a shot off. The practice paid off and she became the youngest player on her state’s 18 and under team and in 2016, she accepted an invitation to the NBA India Academy, a training facility in Delhi for top men’s and women’s prospects to hone their skills and get exposure to scouts.

Sanjana found herself in uncharted waters and wanted to demand attention from American universities. She had read about Kavita’s path to college hoops and hoped to be next. “I knew the process, I knew I had to do my SATs and make a highlight video, but I had no idea how to get into contact with coaches or what colleges to look for,” Sanjana said.

After a few months at the camp in 2018, Sanjana gave her highlight video to Coach Blair Hardiek, who sent it to American colleges, and quickly heard back. “I started getting Instagram DMs from colleges, I felt like a celebrity,” Sanjana said.

Sanjana credits her parents for understanding the opportunity she had with a basketball in her hands. She doesn’t think they anticipated the level of success she’s already achieved. After all, she was a “slacker in school and baller on the court.”

When it seemed like Sanjana could do no wrong, disaster struck. In the Asian Games, she tore her ACL. Multiple schools pulled their offers.

“I was really devastated… when you think you are on the highest point in your career and this happens, it’s just the worst feeling,” she admitted. “People in India didn’t understand the surgery. It was hard to get through all that pressure and people watching you expecting to be perfect.”

However, one college, Northern Arizona University, stood by her, undeterred by the injury that typically requires a yearlong process of healing and painstaking physical therapy. That’s one of the main reasons she signed with the university at 17 — they believed in her when others moved on.

Sanjana’s first two playing years have been a learning curve on and off the court. She spent her first year trying to recover from her injury while learning the team’s playbook and on-court schemes. Off the court, Sanjana had fallen in love with American food so much that Head Coach Loree Payne had to sit down with her to discuss proper nutrition.

Her playing time has been sparse and she says it’s been a grind between studying and focusing on basketball during the coronavirus pandemic. The next big step for her playing career is putting on strength so she can play power forward, Payne said.

“‘It’s tough to be a post player and not be quite as developed strength-wise and fitness-wise,” Payne said. “She continues to try to get better and she works hard in the weight room and she’s definitely dedicated in that way to make herself better.”

As Sanjana continues adapting to the college game, scores of girls and Indian aunties message her for advice on how to take their own game to the next level. She believes parents in India are beginning to understand the opportunities basketball can offer.

“Parents in India are kind of strict and they don’t want you to go away from home,” she said. “They are beginning to understand the opportunities, you know, like getting a world-class education for free and the opportunity the U.S. provides.” 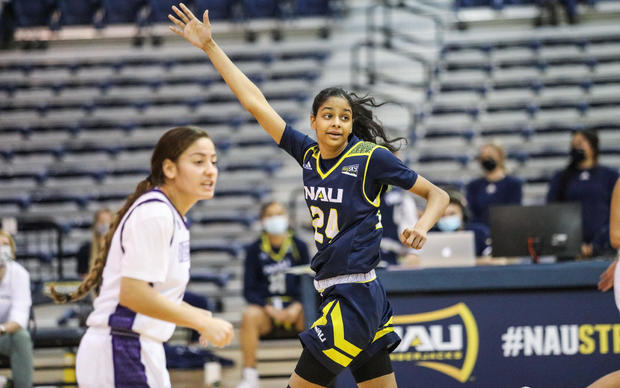 Despite the fanfare, Sanjana admits there are tough moments where she misses her family and says being a role model for the next generation can be overwhelming at times.

“When you see the competition around you, they are so much better (than players in India),” she said. “My teammates sometimes are so much better because they have played with trainers, they’ve had these facilities their whole lives. They don’t know that I haven’t had that so they don’t understand my story. Sometimes I feel like I don’t belong here. I’m scared, especially when I go back to India, I have to prove that I earned this.”

Sanjana dreams of following in the footsteps of her idol, Sue Bird, and hopes to become the first Indian woman to play in the WNBA. If that doesn’t pan out, she hopes to play somewhere professionally. In school, she has turned into a diligent student, aiming for a 4.0 GPA. When her playing days are over, she hopes to help grow the game of basketball for women throughout India.

“Honestly, If I could choose I wouldn’t choose to be the second, I might have chosen to be the fifth,” Sanjana admitted. “That way it’s not a lot of pressure and I can learn a lot from people who have already been there. But now it’s only me, and I’m guiding people through the journey. I mean someone has to do that job and somebody has to fill those shoes and I am grateful for the opportunity to help other people.”