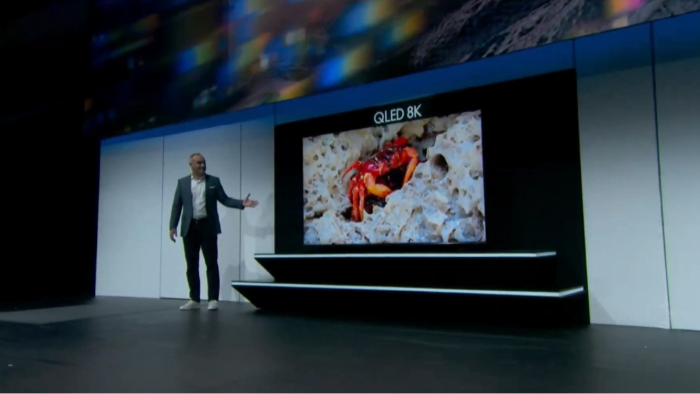 Samsung took the wraps off a 98-inch 8K television set — the company’s largest ever — a move more to establish bragging rights in the TV-set biz than one intended to sell units, especially given that there’s no 8K-formatted content available to consumers today.

The South Korean consumer-electronics giant also announced that it will open up its AI-powered smart assistant Bixby to work with third-party devices and services, including YouTube and Google Maps.

At its press event Monday at CES 2019, the company didn’t announce pricing or specific availability for its new line of 8K QLED TVs, except that select models will be available for pre-order in the U.S. starting Monday. Samsung’s 2019 lineup of 8K televisions also features models with 65-, 75-, 82- and 85-inch screens. The TVs are embedded with the Quantum Processor 8K chip, employing proprietary AI-based technology to recognize and upscale content regardless of the native resolution “to near pristine 8K quality,” according to Samsung.

While there’s no 8K-based video content currently available, Samsung said the televisions will support native 8K content via HDMI 2.1 spec when it becomes available. In addition, Samsung said it is working with Amazon Prime Video on creating 8K content. During the press conference, execs also showed off “Game of Thrones” scenes on the 8K QLED screen, but it wasn’t in native 8K format.

Also at the press conference Monday at Las Vegas’s Mandalay Bay South Convention Center, Samsung said Bixby will be integrated into its 2019 QLED and premium TVs, and smart appliances like refrigerators, washers, as well as air conditioners, mobile devices, AI speakers and more.

As previously announced Sunday, Samsung will offer Apple’s iTunes Movies and TV Shows and Apple AirPlay 2 support on its 2019 smart TV models beginning this spring. The company said support on 2018 Samsung Smart TVs will be made available via a firmware update. Samsung said a new iTunes Movies and TV Shows app from Apple will debut only on Samsung Smart TVs in more than 10 0 countries.

Samsung also on Sunday showed off modular MicroLED displays that can be combined to different screen-size configurations of up to 219 inches in diameter. For now, those aren’t available as commercial products.

During its presentation Monday, Samsung highlighted its 5G wireless tech, noting that it is working with major U.S. carriers and all three mobile carriers in Korea, with additional trials running in Europe and Asia. As previously announced, Samsung is planning to deliver a 5G smartphone in the first half of 2019, with carriers including Verizon, AT&T, and Sprint.

According to the company, around 70% of U.S. households have at least one Samsung device.