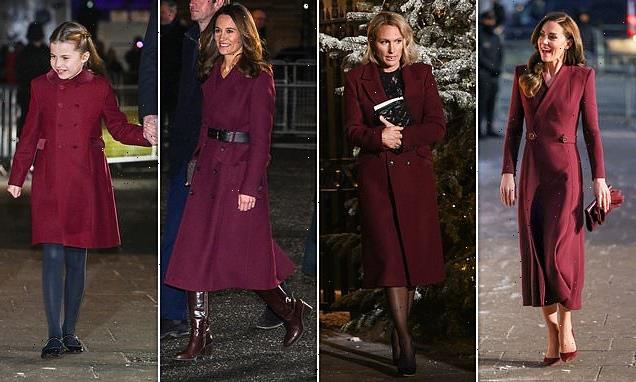 Among those donning the matching red coats were the Princess of Wales, 40, who is hosting the service, as well as her daughter Princess Charlotte, 7, her sister Pippa Middleton, 39, and Zara Philips, 41.

Kate matched her coat, which is believed to be from London-based designer Eponine, with burgundy heels and a clutch bag for her ‘Together at Christmas’ event.

Meanwhile, her daughter Prince was her mini-me in her own version of the red garment, with hers made by Trotters Heritage.

And Kate’s sister Pippa Middleton, who arrived with parents husband James Matthews and parents Carole and Michael, also appeared to have received the style memo, matching her sister in a chic maroon coat which she styled with a black belt, and paired with brown boots.

Zara Philips the daughter of Princess Anne and cousin of Prince William, attended the event alongside her husband Mike Tindall – who recently returned from the jungle after taking part in I’m A Celebrity, Get Me Out of Here.

She donned a velvet Guinea coat with silver buttons for the carol concert, which she paired with knee high boots and a deep jade handbag.

The event came as Netflix released Volume 2 of the Duke and Duchess of Sussex’s six-part docuseries, Harry & Meghan. 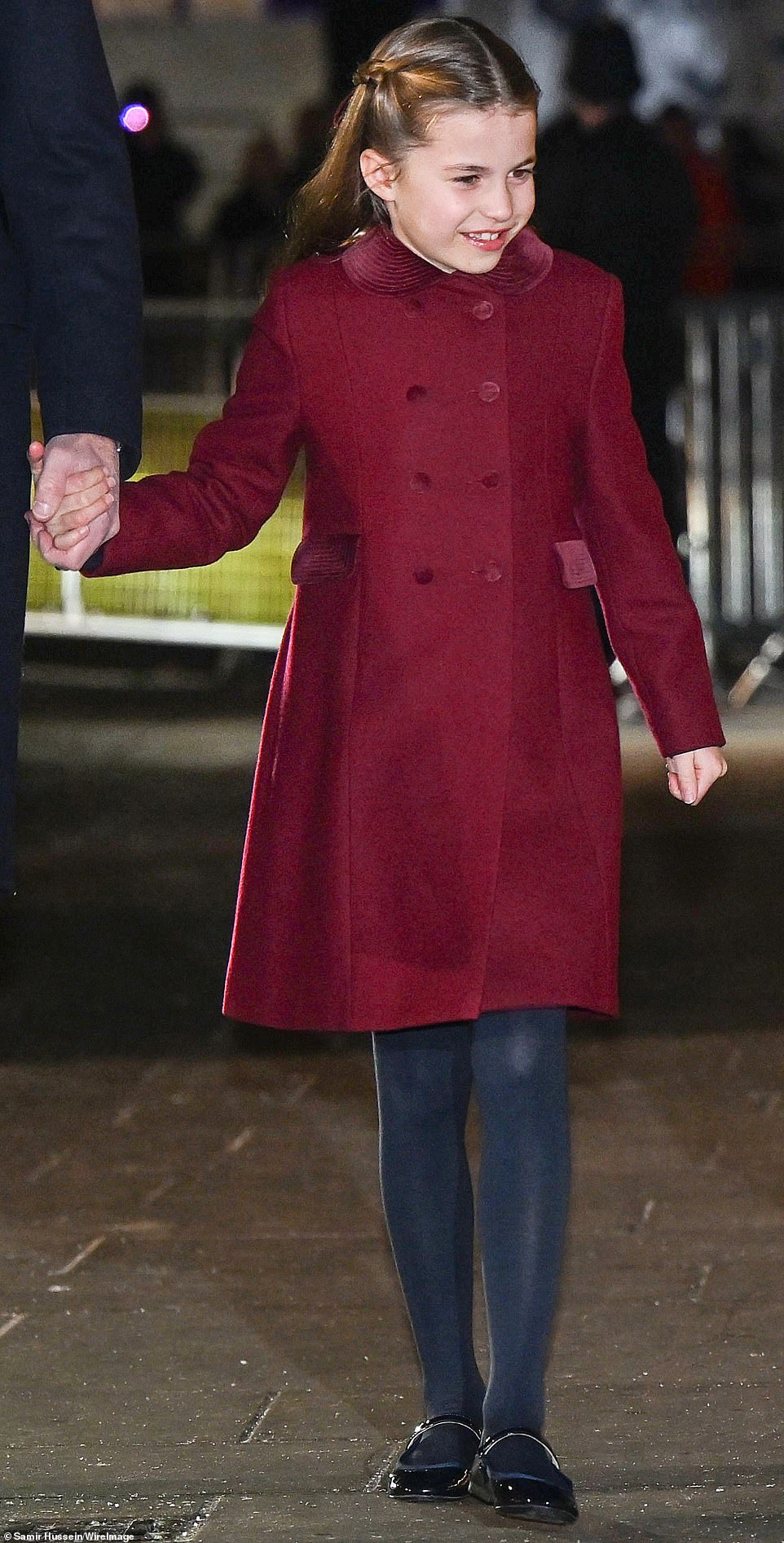 Princess Charlotte, 7, was her mother’s mini-me, donning her own burgundy coat as she stepped out to attend the carol service tonight

King Charles and Prince William have both refused to comment on the claims made by Harry and Meghan in the explosive finale to their Netflix mini-series.

The Sussexes have used their latest Netflix shows to wound Prince William and King Charles and claim that dark forces blocked the Queen from seeing them before Megxit.

Harry also said his family were upset and jealous of Meghan’s popularity so pursued a vendetta against her because she was ‘doing the job better’ and ‘stealing the limelight’ from ‘those born to do it’.

But today, despite the numerous claims in three hours of new interviews and footage, Buckingham Palace and Kensington Palace declined to comment on anything in the series.

Burgundy: Zara Philips, 41, also joined the red crowd, sporting her stylish winter coat in the same hue as the others 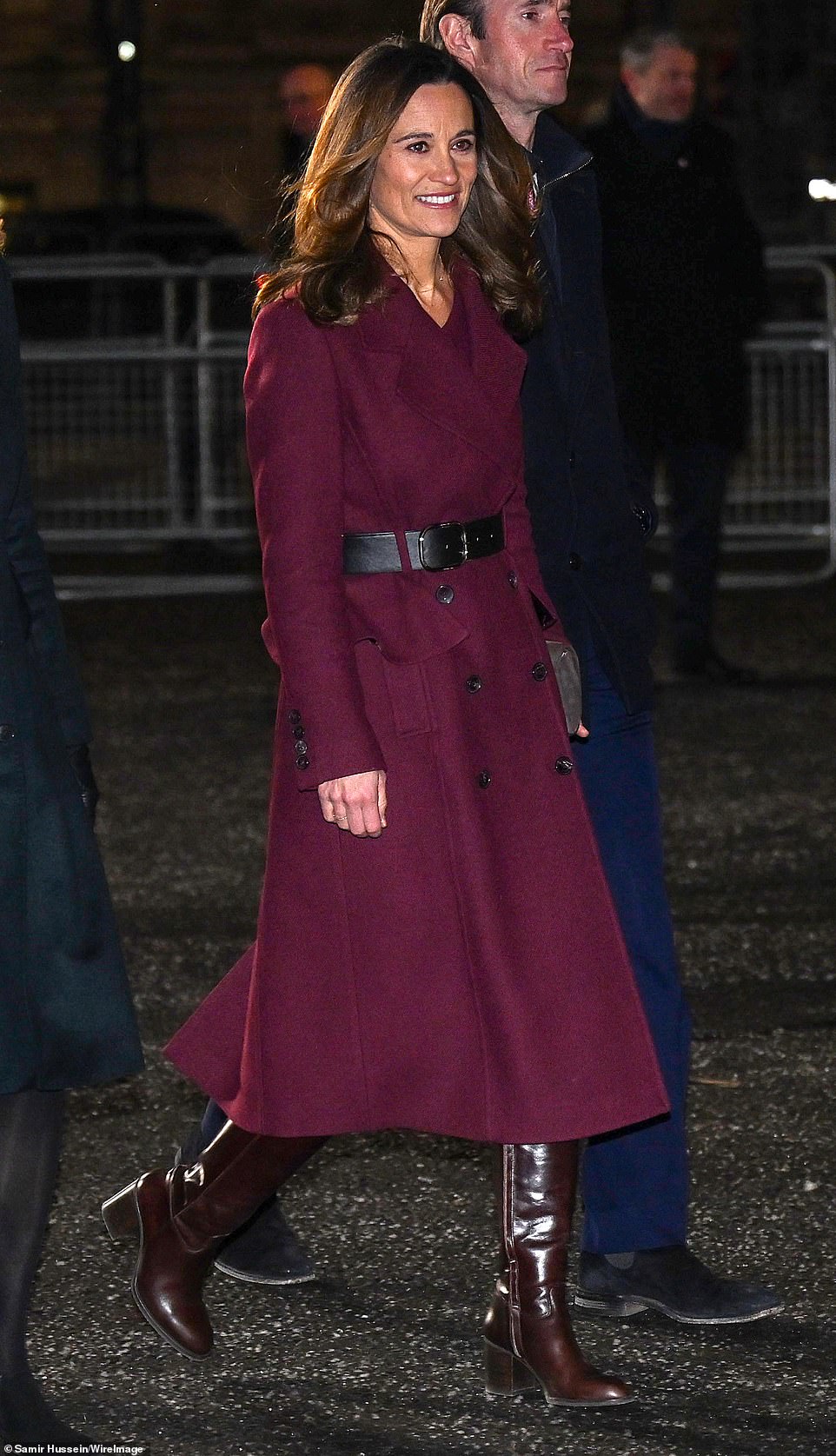 The Princess of Wales’ sister Pippa Middleton (pictured) also joined in on the burgundy coat trend, matching hers with a pair of brown boots

Harry told of the ‘heartbreaking’ rift with his brother who he claimed had scared him in January 2020 while he ‘screamed and shouted’ at him in front of his father and grandmother when he tried to thrash out a deal to leave the UK.

Harry also accused Charles of telling untruths to his face and Her Majesty of saying nothing at the now infamous ‘Sandringham Summit’.

He said: ‘It was terrifying to have my brother scream and shout at me and my father say things that just simply weren’t true. And my grandmother, you know, quietly sit there and take it all in.’

The Duke of Sussex claimed: ‘I went in with the same proposal that we’d already made publicly, but once I got there I was given five options – one being all in, no change, five being all out. I chose option three in the meeting – half in, half out. Have our own jobs but also work in support of the Queen. It became very clear very quickly that goal was not up for discussion or debate’. 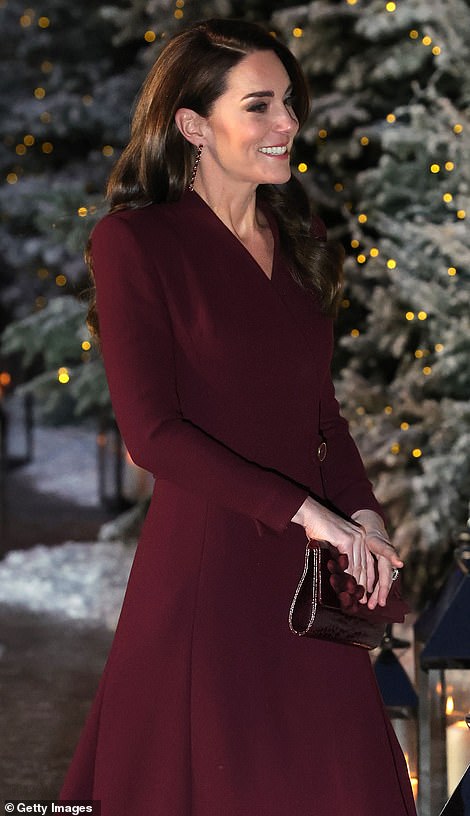 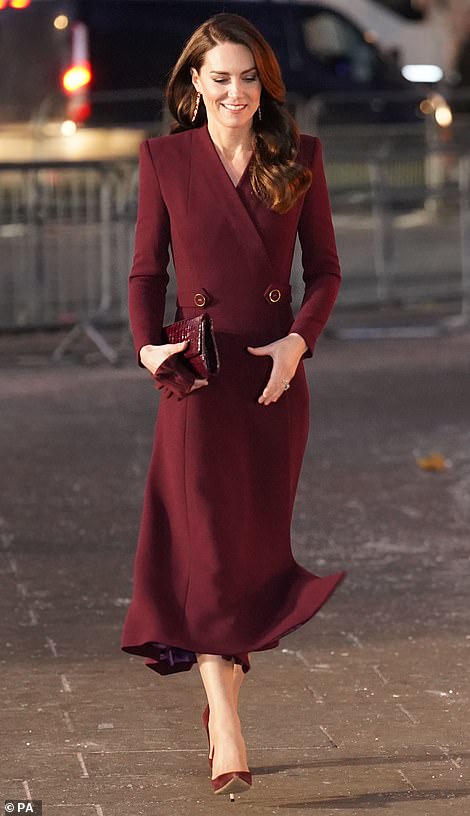 The Princess of Wales looked perfectly polished as she arrived for her Christmas carol service, also wearing burgundy

Harry then claimed the Palace did not seek his permission to put out a joint statement denying claims William ‘bullied’ the Sussexes out of the Royal Family. Viewers said that Harry was implying that William did.

He said: ‘I couldn’t believe it. No one had asked me permission to put my name to a statement like that… [Meghan] burst into floods of tears, because within four hours they were happy to lie to protect my brother… and yet they were never willing to tell the truth to protect us.’

He also denied it was Meghan’s decision to walk away and move to LA. ‘In fact, it was my decision. She never asked to leave. I was the one that had to see it for myself. But it’s misogyny at its best,’ he said.

Kate will today host her carol service in Her late Majesty Queen Elizabeth II’s honour, in what will be her first  since she was given the Princess of Wales title. 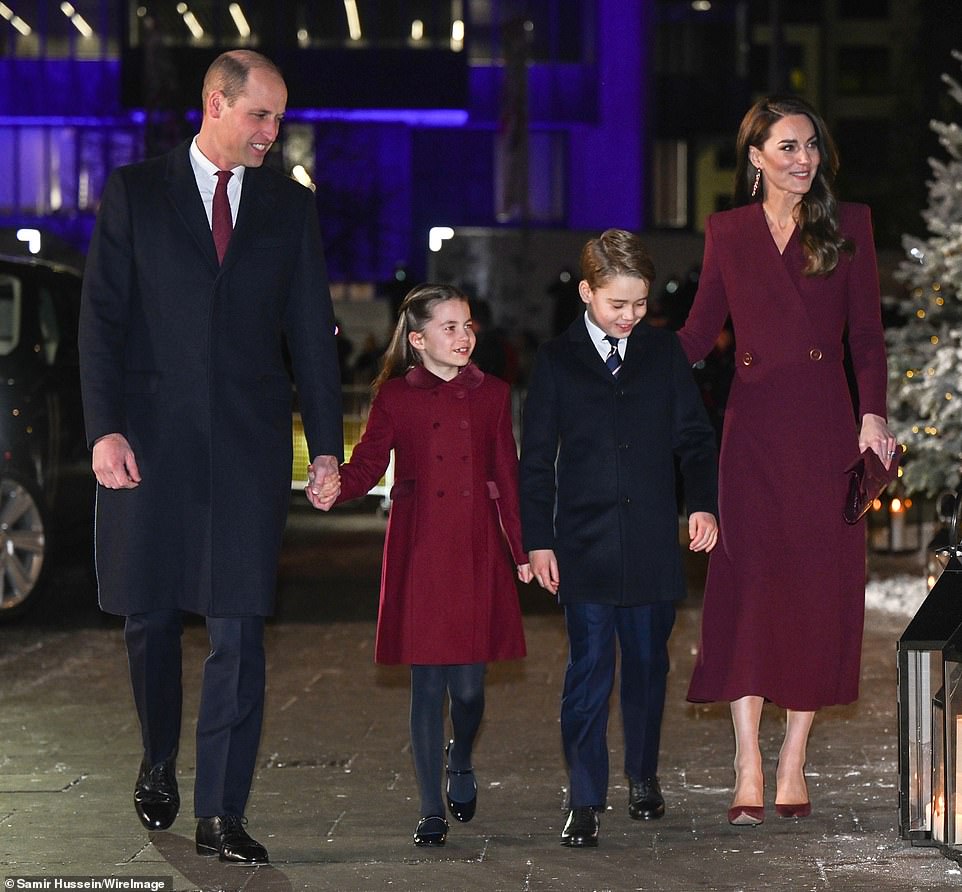 Prince William, Princess Charlotte, Prince George, and the Princess of Wales attend the festive service together

The service – attended by the King and Queen Consort – will recognise the selfless efforts of communities throughout the UK, highlighting the importance of coming together to support one another.

Spearheaded by the Princess, it will combine both traditional and modern elements, reaching people of all faiths and none. The service, Royal Carols: Together at Christmas, will then be shown on ITV on Christmas Eve.

It is also set to pay tribute to the late Queen, and will see Westminster Abbey flooded with festive decorations as the world renowned Abbey Choir sing carols and special guests deliver special readings.

If you enjoyed this story…

Back in the fold! Mike Tindall joins Zara and fellow royals to support Kate at her annual carol concert – in first appearance with the family since I’m a Celeb

Dazzling in white! Countess Wessex is elegant in a cream coat and leather boots to support Kate’s Christmas carol service

Kendall Jenner's $7,750 jacket is mocked for looking like 'testicles'

Paul Stanley on life post-farewell tour: ‘We couldn’t kill KISS if we wanted to’
World News