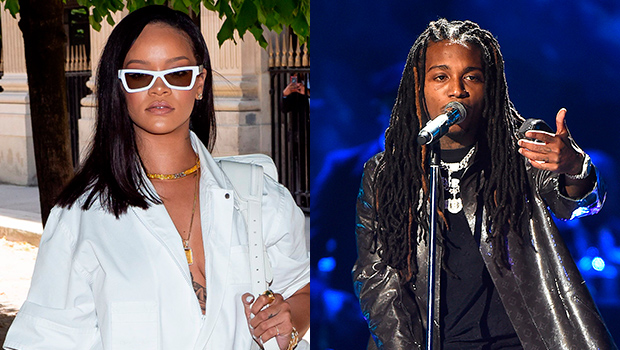 They may be exes, but Rihanna has sided with Chris Brown in the infamous ‘king of R&B’ debate that Jacquees started…Breezy will be happy to hear why, which HL has EXCLUSIVELY learned!

No bias here — Rihanna, 30, is just offering her two-cents from an objective standpoint! The Anti hit maker thinks the R&B crown should not go to Jacquees, 24, as she’s “on Team Chris Brown when it comes to who is the King Of R&B,” a source close to Rihanna EXCLUSIVELY tells HollywoodLife. She’s joining the army of fans who insisted that Chris holds the rightful title, after Jacquees — who has a upcoming mixtape with the “Loyal” singer — declared he’s this generation’s king of the soulful genre in a Dec. 8 Instagram video (below).

“She thinks it is silly that Jacquees would think that he could be the king,” our source continues. “Rihanna may like a few of Jacquees’ songs but she feels like he has a long way to go before he is on the same level as her ex Chris.” Four of the “B.E.D.” singer’s tracks have made Billboard’s Hot 100 chart, but not until 2017 — Chris has been making that list since 2005! However, Jacquees has since argued that Chris is not a part “of [his] generation,” given their five-year age gap.

If Rihanna saluting Chris sounds awkward, our source explains, “Despite Rihanna’s rocky history with Chris, she still has a lot of love for his talent and music.” Her relationship with the other R&B chart-topper initially ended right before the 2009 Grammys, the night of which Chris physically assaulted Rihanna. After the “Lemon” singer forgave her ex-boyfriend, they gave their romance a second go from 2012 to 2013. But for now, Rihanna and Chris are on the same page when it comes to music opinions!

“Chris knows Jacquees, loves his music, and has even worked with him, but feels like it is disrespectful to him and to accomplished, Grammy-winning guys like Usher and R. Kelly to be calling himself the King of R&B,” a source close to Chris EXCLUSIVELY told us on Dec. 10. He even thanked his fans for the “R&B love” on his Instagram Story on Dec. 9. But Chris’s ego should be feeling a healthy boost for reasons other than career acknowledgement! As we’ve told you before, he was “crushed” after his ex-girlfriend reunited with her other ex-boo, billionaire Hassan Jameel, for a dinner in Santa Monica on Nov. 27, according to what another source close to Chris told us on Nov. 29. But at least Chris has her vote in the R&B debate!

You can watch Jacquees state he’s the king in the video above! John Legend, 39, seemed to be one of the few not triggered by such a bold claim. “Honestly I don’t think there is a king of r&b right now. Anyone consistently dominating the charts, selling out arenas, etc, a la Usher at his prime. Not a comment on quality. I think the throne is open right now,” the “All Of Me” singer tweeted on Dec. 10. In a follow-up tweet, he then mused, “Part of me is talking myself into saying Bruno [Mars] or The Weeknd but I’m not sure they neatly fit into the genre.” Well, it sounds like RiRi could challenge his opinion about the throne’s vacancy.