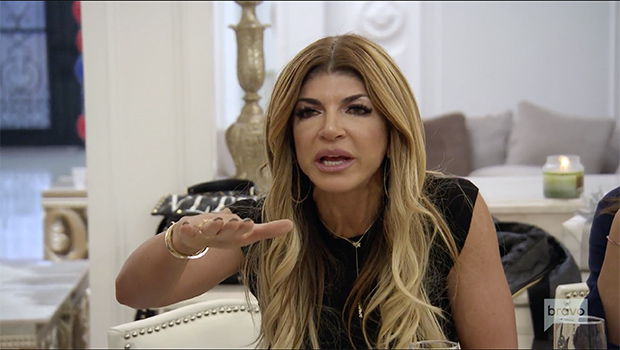 ‘RHONJ’: Jackie Attacks Teresa Giudice & Reminds Her That Her Husband’s In Jail

Yikes! ‘Real Housewives of New Jersey’ newcomer Jackie Goldschneider took a jab at Teresa Giudice during the Dec. 5 episode and it wasn’t pretty. Get all the details, here!

The ladies of The Real Housewives of New Jersey gathered at Jennifer Aydin‘s luxurious house in Paramus during the Dec. 5 episode, but what was supposed to be a fun-filled gathering with their kids turned toxic after Jackie Goldschneider attacked Teresa Giudice. Jackie was only defending Melissa Gorga, but since she’s so new to the group, Teresa was shocked to hear what came out of her mouth! It all started during last week’s episode, when Teresa made it clear that she was upset about brother Joe Gorga not spending enough time with their ailing father, Giacinto Gorga. Melissa told Joe how Teresa felt, so that led to another quarrel between the brother-sister duo. Teresa then blamed Melissa for running and telling Joe what they had discussed. Teresa actually told Melissa that she should have been careful with the way she conveyed the message to Joe.

“I don’t wanna be told how to convey something to my husband,” Melissa said this week, as she shot back at Teresa. “My marriage is strong. It’s good for a f***ing reason. We talk. And that’s it! Nobody tells me how to speak to my husband. Not my sister-in-law. Not my mother. No one!” But Teresa didn’t agree. She went on saying, “You should have made him understand that he’s…,” before she was cut off by Jackie.

“Do you really think that Melissa could control her husband’s emotions?” Jackie asked Teresa. “I’m sorry. With all due respect, do you really feel like your husband would be in jail right now if you could control what he did?” Yes, Jackie really went there, and quite frankly, we were floored when those words came out of her mouth. So was Dolores, who said, “Oh s***.” Fans of the show know that Teresa doesn’t like to talk about prison — she once referred to her own 11-month sentence as being “away” or “at camp.”

Teresa and Jackie kept going at it some more before Melania interrupted and told Teresa she wanted to leave. Jackie insisted she was just trying to make a point by saying that a woman can’t control her husband, but Teresa still felt that Melissa could have conveyed the message to Joe differently.