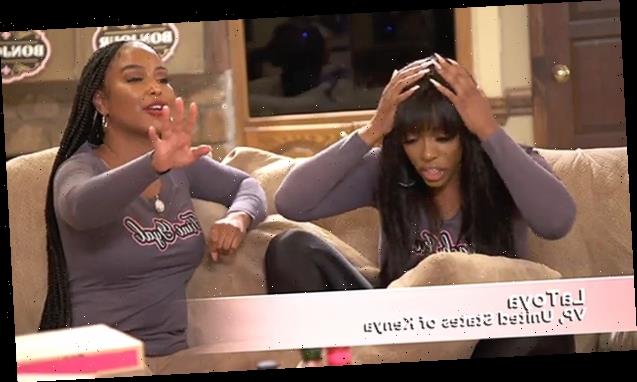 LaToya Ali found herself at odds with just about everyone during the March 21 episode of ‘The Real Housewives Of Atlanta’.

The drama with LaToya Ali may have started with Kenya Moore during the March 21 episode of The Real Housewives of Atlanta, but before we knew it, Porsha Williams‘ friend Falynn Guobadia was looking to attack LaToya with a golf club. And no, we’re not kidding.

It all started when Kenya met up with Marlo Hampton and found out that LaToya had told everyone that Kenya’s estranged husband Marc Daly wanted alimony from her. It wasn’t information that Kenya necessary wanted out there, but she was more upset with the fact that LaToya used the information to defend her recent behavior (ie. trying to out whoever had sex with the stripper).

So when Kenya came face-to-face with LaToya at Fallyn’s Halloween party, which wasn’t really a party at all and more of a get together, Kenya confronted her and tried seeking an apology. But LaToya kept laughing and said she couldn’t take Kenya seriously while they were in costumes. So Kenya gave up on the conversation and headed back inside.

Once they reunited with the ladies, LaToya revealed she was going to leave because she was “bored”. And this was after she insulted Fallyn’s husband and the house they share, so to be honest, everyone was pretty happy to hear LaToya was leaving. But she forced Porsha into walking her out and once they got out front, LaToya asked Porsha why she and Kenya have beef with each other. Porsha didn’t really know what to say and LaToya just kept repeating everything Porsha was saying, so the conversation wasn’t productive at all.

Then, in the midst of their conversation, Kenya, Fallyn and Cynthia Bailey went outside because Kenya also wanted to leave, but before that could even happen, LaToya started shading Fallyn again. Not only did LaToya criticize her for having “three baby daddies”, but she kept insinuating the Fallyn only lives in the house she lives in because she had sex with a “65-year-old”.

Things got so heated that Fallyn tried charging at LaToya. And when security intervened, she ran inside the house so she could exit through the garage — which is where she also grabbed a golf club that we can only assume she wanted to use in a fight with LaToya. Fortunately, security stopped Fallyn again, and a fight never happened.

Fallyn’s husband then escorted her upstairs while the ladies regrouped and went home for the night.