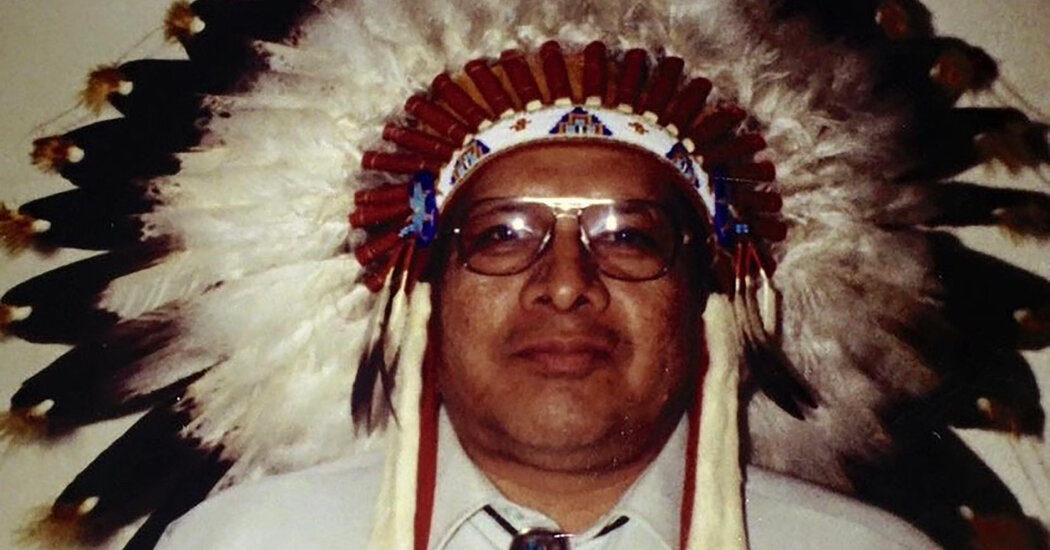 The Rev. Wilbert Robertson, a pastor and member of the Sisseton-Wahpeton Oyate Sioux tribe who founded churches on Indian reservations in South and North Dakota, died on Nov. 25 at an assisted living center in Roslyn, S.D. He was 86.

The cause was Covid-19, his daughter Ruth Hopkins said.

Mr. Robertson became a born-again Christian in the Air Force while stationed in Thailand during the Vietnam War. He returned to South Dakota in 1972, to the Standing Rock Indian Reservation, where the Standing Rock Bible Church in McLaughlin needed a pastor; they took Mr. Robertson on despite his lack of experience.

Having found his calling, he went on to attend Mokahum Indian Bible School in Cass Lake, Minn., and Midwestern Baptist Theological Seminary in Kansas City, Mo. A Baptist missionary seeking a Native American pastor to start a church in the Lake Traverse Reservation in Sisseton, S.D., had heard about a Sioux pastor with a gift for preaching — Mr. Robertson — and recruited him.

Along with his wife, Judith, whom he married in 1961, he opened a church in Sisseton in a mobile home in 1979. He helped build a permanent building with his own hands, and the church, now called the First Baptist Church of Sisseton, is still going strong.

After leading the two churches for nearly 30 years, he retired from the ministry in 2018. He also served as a tribal judge and district chairman for the Sisseton-Wahpeton tribe.

Wilbert David Robertson was born on March 21, 1934, in Fort Totten, N.D., the son of Jeremiah and Mabel (Keeble) Robertson. His father, a World War I veteran, found odd jobs during the Great Depression, and his mother raised seven children.

When he was 4, Wilbert, like his siblings, was forced to go to a boarding school in Fort Totten. Many Native American children were forcibly taken to such schools with the aim of assimilating them into white culture. Children had their hair cut and had to speak English. Those caught speaking in their native tongues were punished.

Beginning in the late 19th century, the federal government operated about 100 of these schools; the last closed in 1973.

When Wilbert’s long hair was cut, he developed a cow lick. The cow lick earned him the nickname Jiggs, after a character, whose hair stood straight up, in the popular comic book and movies “Jiggs and Maggie.”

“He was very bright, an avid reader,” his daughter said in a phone interview. “He had to be to survive the boarding school.”

Graduating a year early, in 1952, he hitchhiked to Grand Forks, N.D., and enlisted in the Air Force, where he became a fighter jet mechanic.

He eventually became a crew chief and served in East Asia toward the end of the Korean War; he served in a similar capacity during the Vietnam War. After leaving the service, he worked at a leper colony in Cambodia for a time before returning to the United States.

Along with daughter Ms. Hopkins, he is survived by his wife; another daughter, Linda Miller; two half sisters, Brenda Azure and Barbara Robertson; six grandchildren; and three great-grandchildren.

“My life is filled with memories of him sacrificing for others,” Ms. Hopkins said. “Children from our extended family were taken in, and he and my mother helped raise them. I remember people coming to the house asking for advice. If they were in trouble, they would go to him.”

Claridge’s Keeps the Faith and Hoists Its Annual Christmas Tree

Cardi B asked fans if she should spend $88,000 on a purse. After backlash, she offered to match charitable donations.
World News