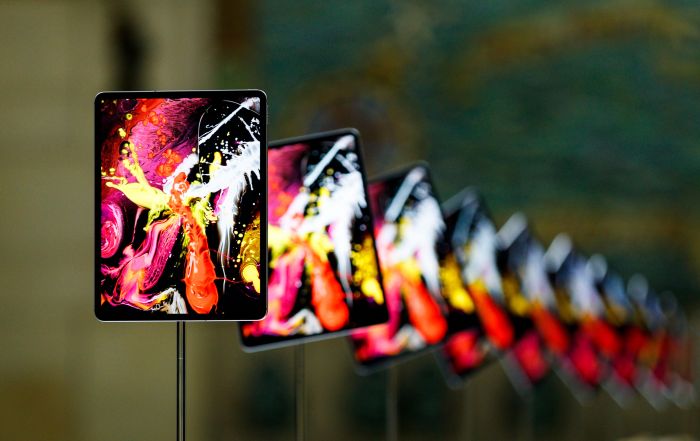 It’s shaping up to be a busy holiday season for tech and electronics companies, as gaming consoles, streaming devices and televisions top the list of most anticipated gifts, according to retail analysts.

New data from Adobe Analytics forecasts that the holiday shopping season (the period from November 1 to December 31) will see more than $124 billion in total U.S. online retail sales. According to Adobe, top products this year include Dell and Lenovo laptops, LG and Samsung TVs, streaming devices (including Roku, Chromecast, and Amazon Fire TV), and gaming consoles, like the Nintendo Switch.

Here’s a look at what people are picking up online this year.

Released to a ton of fanfare this week, the new Super Smash Brothers game for Nintendo Switch brings together every fighter from the series for a new game play with more stages, faster combat and new attacks. Reviewers are calling it the best Smash Bros. yet. Purchase: $59.88 on Walmart.com.

The hyper-realistic survival saga was just named “Game of the Year” at The Game Awards 2018, and it’s expected to sell at a rapid pace this season. Critics praise the game for seamlessly merging Norse mythology and pathos with incredibly intimate camera angles and action that bring the gaming experience closer than ever. Purchase: $39.99 on Walmart.com.

If you’re an Xbox fan (or have one on your gifting list), this bundle provides some decent value for the price. The set includes the 1TB Xbox One S console, a wireless controller, and a full-game download of Fortnite Battle Royale – one of the biggest franchises of the year. Bonus features include the Eon cosmetic set download, 2000 V-bucks, and a one-month trial of Xbox Game Pass. Purchase: $249.99 on Walmart.com.

Released earlier this year, the new 12.9″ iPad Pro is Apple’s sharpest, sleekest tablet offering yet. The iPad features an advanced, edge to edge Liquid Retina display, Face ID technology, and an A12X Bionic chip, that Apple says is faster than many PC laptops. The new Apple Pencil and Smart Keyboard Folio add to the creative and multi-tasking properties that take this iPad from casual viewing device, to a work and travel necessity. Purchase: $999.99 on BestBuy.com.

If you’re looking for a premium viewing experience, you’d be hard-pressed to find a better TV this year. The LG Smart OLED TV features AI capabilities and a built-in Google Assistant, so you can control not only your shows and apps, but also connected smart home devices using just your voice (or the LG “Magic Remote”). A new processor enhances sharpness and depth, with brighter, more brilliant colors, while bringing to life even the tiniest details on your screen. The Dolby Atmos sound system, meantime, employs the same powerful audio technology used in state-of-the-art cinemas, creating a truly immersive sound experience. Purchase: $1796.99 on Amazon.com.

This portable gaming console continues to be a best-seller, and this boxed set includes the Nintendo Switch console, a Nintendo Switch dock, a neon blue Joy-Con (L) and neon red Joy-Con (R),  two Joy-Con strap accessories, a Joy-Con grip, HDMI cable and the Nintendo Switch AC adapter. Whether you’re playing the Switch on your TV or screen, or transitioning to handheld mode, this is a gift that gamers of all ages will appreciate. Purchase: $299.00 on Walmart.com.

This Lenovo “Yoga” Chromebook is one of the best values for a laptop computer, with enhanced features that are normally difficult to find at this price point. The fold-out laptop features a near-edgeless, touchscreen display with 4K UHD resolution, plus an 8th Generation Intel Core i5 processor and 128 GB of flash storage for fast response time and stress-free streaming and working. At just 0.70″ and weighing just four pounds, the laptop is super thin and lightweight. The “Yoga” also gets up to 10 hours of battery life. Purchase: $512.99 on Lenovo.com.

If you’ve cut the cord, or just want to take your movies and apps on the go, pick up an Amazon Fire TV Stick – now released in a powerful 4K version. Get brilliant picture and sound while streaming your favorite movies, TV shows and games. Connect the stick to Alexa and control your screen, volume and more with just your voice. You can also ask Alexa to call up your favorite apps, YouTube, Facebook or check your security cameras all from your screen. Bonus: Amazon Prime members can access to thousands of original shows and programs, plus ad-free listening to millions of songs with Prime Music. Get a 30-day free trial to Amazon Prime here. Purchase the Amazon Fire TV Stick: $49.99 on Amazon.com.

One of the best-reviewed security cameras in the market right now, the Nest Cam provides you with a 130º wide-angle view in 1080p HD, letting you keep tabs on your home 24/7. Download the app and call up your camera and get alerts at any time from your phone. You can also speak to someone through your phone to get someone’s attention, or to “answer” the door. Night vision mode features eight infrared LEDs to let you see clearly, even in the dark. This set includes two weatherproof security cameras, all cables and adapters. Purchase: $279.13 on Amazon.com.