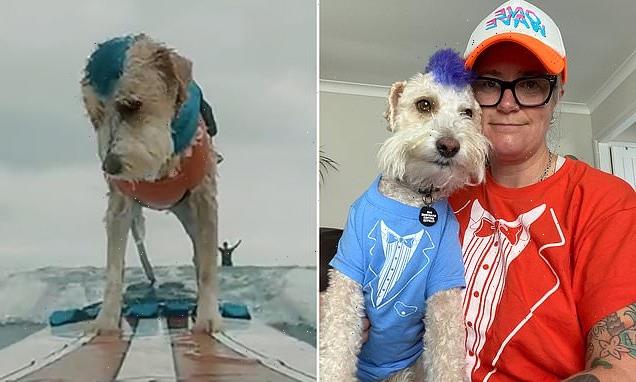 Rescue pup is a viral sensation as a SURFING therapy dog

An adorable surfing therapy dog helps children and adults with mental illness by riding the waves.

Owner Kirstie Coy-Martin, 48, rescued Poodle, a poodle-mix, in 2016 and began training him later that year on the beaches near Chichester, Sussex.

Now, Scooter, who has his fur styled in a blue mohawk, acts as Kirstie’s assistance dog and a surf therapy dog, as well as visiting hospitals and care homes. 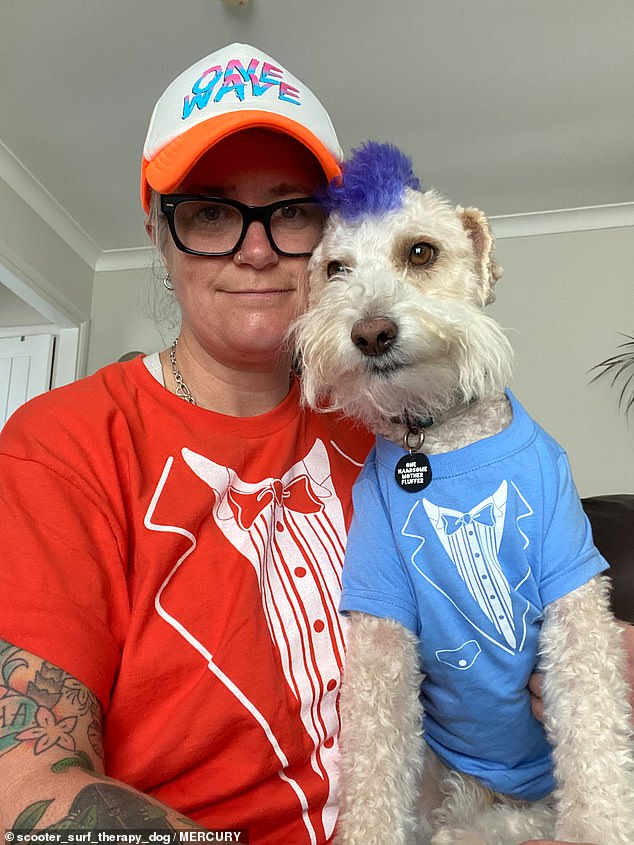 Scooter, seven, is a therapy dog living in Chichester that was trained as a therapy dog and surf dog after he was rescued by Kirstie Coy-Martin, 48, left 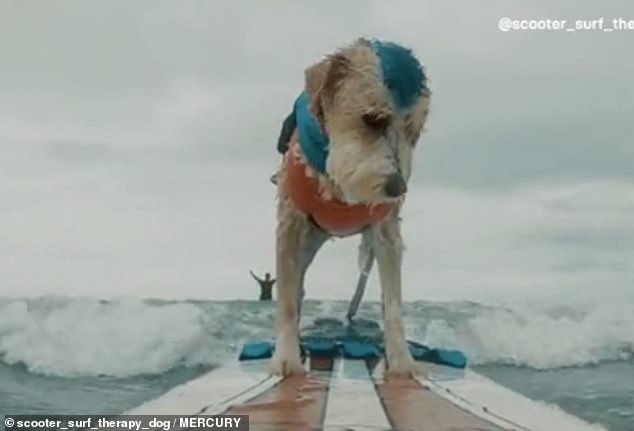 On top of being a surf therapy dog, Scooter visits hospital and care homes and his helping hundreds of people with their mental health

‘I knew I had to adopt him when a friend sent me a picture of him, he was looking at the camera and it was like his eyes reached into my soul.

‘He’s just amazing, he’s so good at providing comfort to the people who need it.

‘If we visit a hospital or care-home, he has a sixth sense for who’s the most ill, or who’s missing their own dog, and he makes a bee-line for them.’

Scooter is known for his blue mohawk which never fails to make people smile. 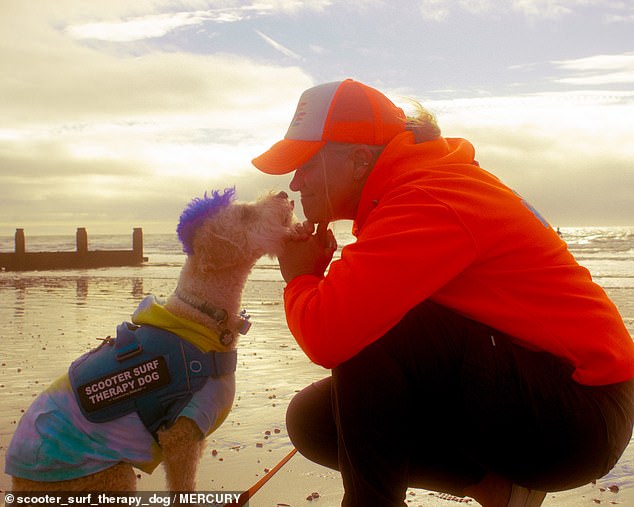 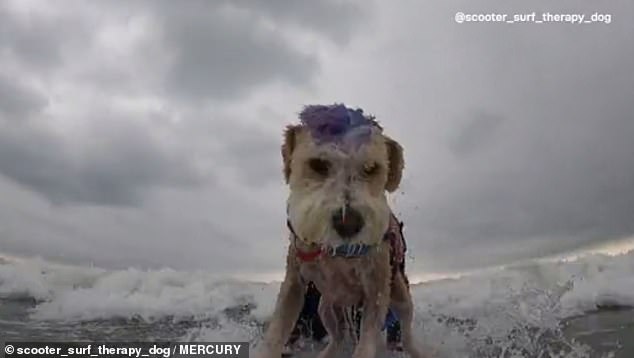 Hitting the waves with Scooter helps people build their confidence. Usually it starts with a cuddle while they discuss any issues they want to, and ending with a trip into the sea

Kirstie said: ‘I did it just to make people smile, and it always does.

‘You get the odd person that thinks I’m being cruel to him or something, but I’d never do anything he didn’t enjoy.

‘When people see him on the street they always want to stop and chat, so I get to educate people on therapy dogs and surf therapy.

‘We’re always trying to make people smile, even though some of the things we deal with are quite serious.’ 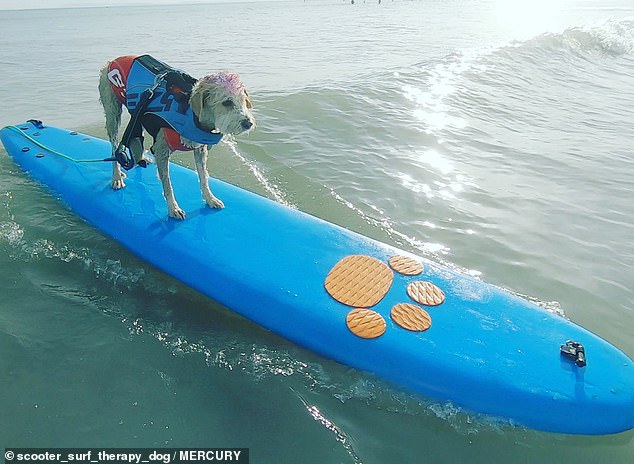 The pup manning his very own doggy surfboard Kirstie revealed he was first trained as a therapy dog, before becoming a surfing dog

Scooter has helped both children and adults with his surf therapy skills, usually starting with a cuddle while they discuss any issues they want to, and ending with a trip into the sea.

Kirstie said: ‘There was one boy who wouldn’t even get out the car on his first session.

‘After a couple of weeks he was surfing on his own with Scooter, and his mum said he’s like a new boy.

‘It really helps build up their confidence, and he works with adults as well.

‘With that we normally start all sat in a circle on the beach speaking about whatever has brought them here.

‘Scooter normally has a cuddle with whoever is speaking, and then we get in the water, anything from paddling to surfing.’ 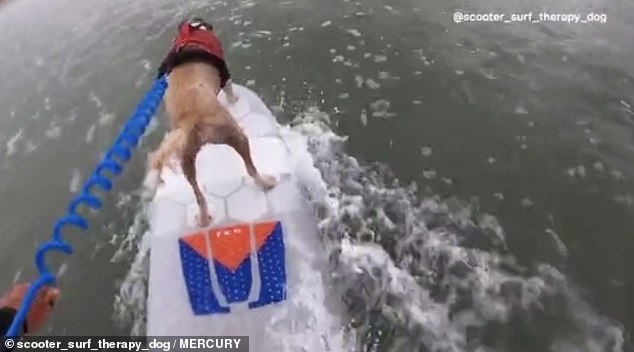 Scooter, pictured on the board, is the UK’s only known surfing therapy dog and Kirstie had to reach out to surfers in California for advice on how to train and care for him

Kirstie started training Scooter as a therapy dog a few months after she adopted him.

She said: ‘When you get a rescue you never know how their behaviour is going to be.

‘He was so chilled when I first got him, but I waited a few months in case that changed.

‘At first he took all the exams to become a therapy dog with a charity that sends dogs to care homes and hospitals. Then, I saw something about surf therapy dogs online and it was a lightbulb moment for me.

‘I love surfing, and he was already a therapy dog so I wanted to combine the two.’

Kirstie ended up having to reach out to someone in California for more information, as Scooter is the only surf therapy dog in the UK.

She said: ‘Someone in California sent me a training pack for him and we got started with it.

‘At first it was just putting a surfboard in the garden and getting him used to standing on it, then putting it on pillows and cushions so he could balance.

‘From there we went to a dog swimming pool, and the woman who runs it was a bit surprised when I said what I was doing but she said it was fine.

‘Then we were going out to the beach on calm days, and now he can surf on his own.’

Cop, 26, charged with two counts of rape while off duty after 'woman was attacked' | The Sun
World News