Labor leader Anthony Albanese has vowed to invest more in renewable energy, free TAFE courses and more university places, and cheaper childcare, as he kicked off the party’s unofficial election campaign in the must-win Sydney electorate of Reid.

In a speech to the party faithful in Ashfield, in Sydney’s inner west, Mr Albanese laid out Labor’s campaign for the government as about “seeking renewal, not revolution” while attacking the character and trustworthiness of Prime Minister Scott Morrison.

Both Labor and the Coalition are in pre-election mode ahead of next year’s poll, with Mr Morrison campaigning in key marginal seats in Sydney and Melbourne last month. As his opponent spoke in Sydney, Mr Morrison was campaigning in regional NSW with a visit to the Bathurst 1000 Supercars race. 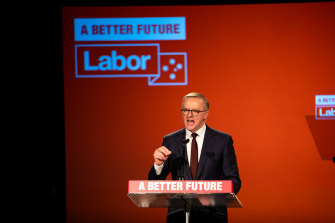 Mr Albanese said voters had a choice between “a government that is simply spent, and a Prime Minister whose tank is on empty” or “fresh start for Australia with Labor” which had a plan built around the lessons of the pandemic.

“That our working families, the backbone of our country, need and deserve a better life. One where the basics like power bills, childcare and health care don’t break the bank,” Mr Albanese told supporters at the West Ashfield Leagues Club.

“That Australians deserve secure, well-paid jobs. Because when COVID hit, those in the most insecure work – like casuals – paid a heavy price when their jobs disappeared without warning.”

He laid out the key areas that would underpin Labor’s election campaign: making Australia a “renewable energy superpower, a manufacturing powerhouse, the skills and education capital of Asia [and] a society that guarantees secure work, cheaper child care, and stronger Medicare.”

The speech included the policies announced by Mr Albanese in recent days, including its pledge to cut household bills by an average of $275 over three years as part of Labor’s climate plan policy to cut greenhouse emissions 43 per cent by 2030. He also committed $1.1 billion to make 465,000 TAFE places free and fund an extra 20,000 university spots, with the focus on areas of skills shortages.

Speaking against a Labor-red backdrop featuring the slogan “a better future”, which will form the refrain of the party’s election campaign, Mr Albanese said Labor’s agenda was affordable and achievable.

He urged the Labor faithful to do their bit to convince undecided voters to vote for change.

“This summer, the next time someone tells you they still haven’t decided who they’re voting for, and they don’t think it will make a difference anyway, ask them this: do you really think this government led by Scott Morrison and Barnaby Joyce will get better in its fourth term?,” he said.

HGTV: Christina Haack's Kids Have the Cutest Reaction to the Elf on the Shelf and Fans Adore It
World News