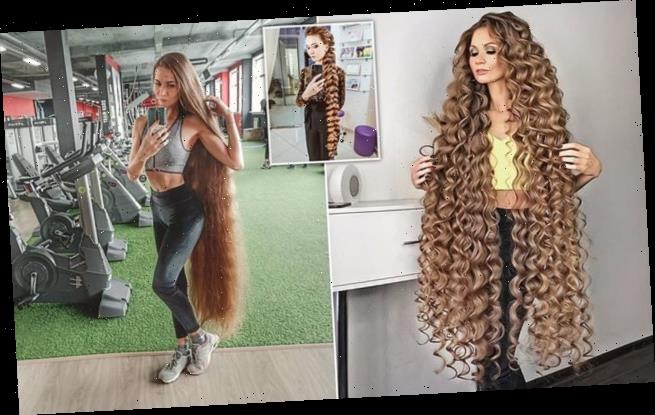 A ‘real-life Rapunzel’ says she hasn’t cut her hair for 17 years, after making a bet with a friend as a teenager.

Daira Gubanova, 34, from Banaul, in south-central Russia, first started growing her locks when she was 14 and it now measures almost two metres in length.

Her wavy, golden hair now measures a staggering 172cm and hasn’t been touched by a pair of scissors since the day she started the schoolyard competition with her friend.

Fascination with her hair has seen Daira amass over 184,000 followers on her Instagram page, which is dedicated to photographs of her hair. While Daira says men generally love her hair, women can sometimes be more negative.

Daira Gubanova, 34, from Banaul, Russia has been growing her hair for 17 years and it’s now 172cm long – and she has over 184,000 followers on her Instagram page 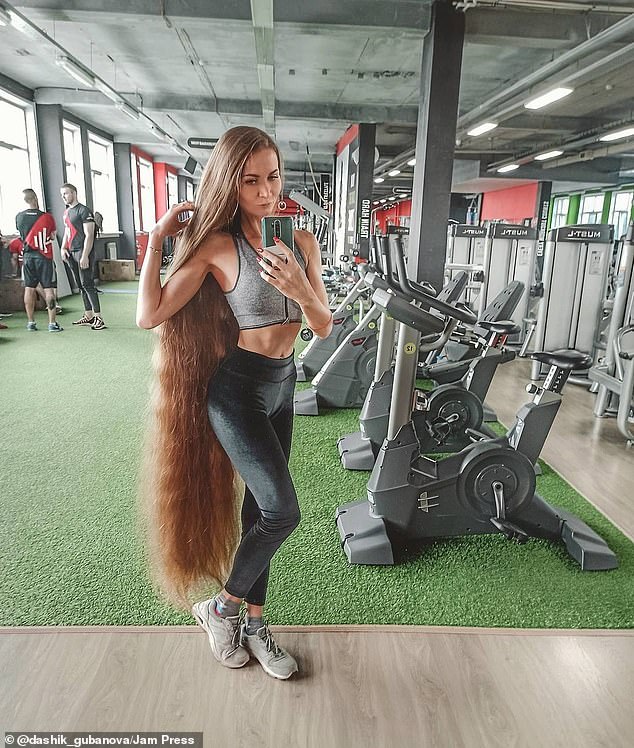 The airport security worker said she decided not to cut it after making a bet with a friend as a teenager, and it hasn’t been near scissors since

Daira’s followers shower her with praise for her gorgeous locks, as the mum proudly displays her long mane in her Instagram posts.

One user wrote: ‘You are my favorite stunning, breathtakingly wonderful very long haired Goddess’ Another added: ‘Goalsss gotta try grow mine out like this !’

Her daughter, 11-year-old Evelina, features in some of her posts too – and the young girl plans to grow her hair as long as her mum.

She explains how she came to have such long locks: ‘Until I was 14 years old, I had long hair that was just above the knees.’ 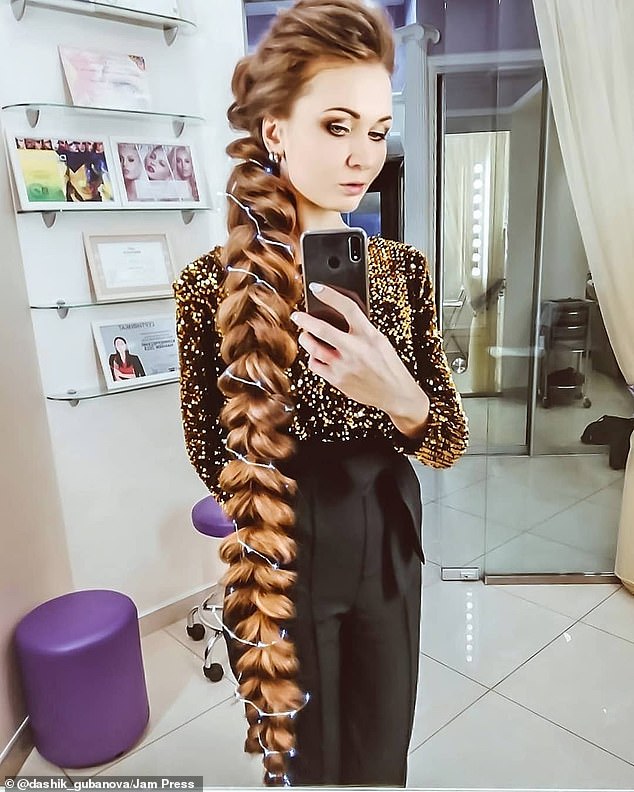 Her growing journey began when she was just 14, when her hair was already at her knees but she decided to cut it short. Months later, her friend challenged her to a competition to see who could have the longest locks 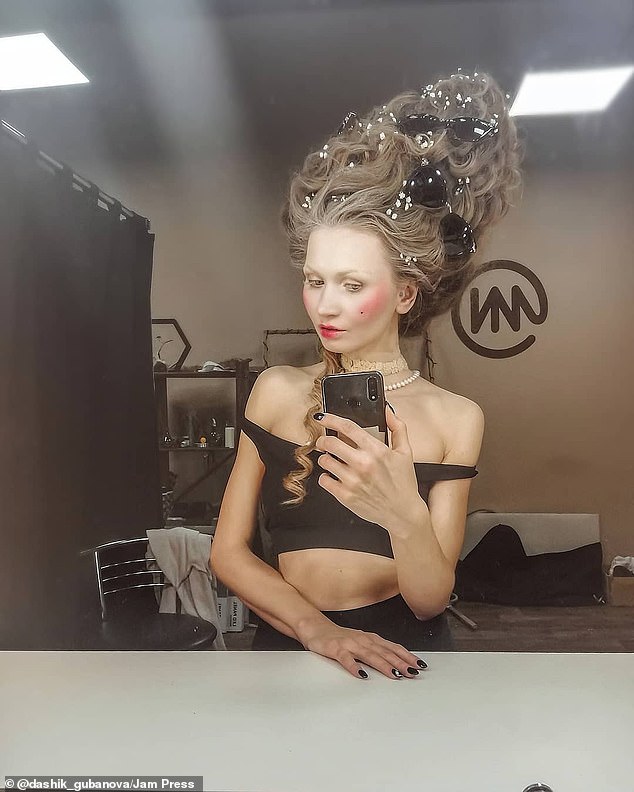 Daira, a mother-of-one works as a part-time hair model, and her daughter Evelina wants to follow in her mother’s hair-growing footsteps

Daira, who works in airport security and models as a part-time job, says she cut it very short and then started to dye her hair.

‘One day, a friend of mine told me that she believed I couldn’t grow my hair as long as hers, so I decided to challenge her and grew it even longer. My daughter Evelina grows her hair long as well and wants to be just like her mother.’

To keep her hair healthy and strong, Daira follows a strict hair routine every day – and has now revealed her top tips for others keen to improve their mane.

The mum washes her hair twice a week and nourishes her scalp with treatment masks made up of essential vitamins and oils. She also applies leave-in cream every day and takes vitamins to keep her hair healthy and shiny. 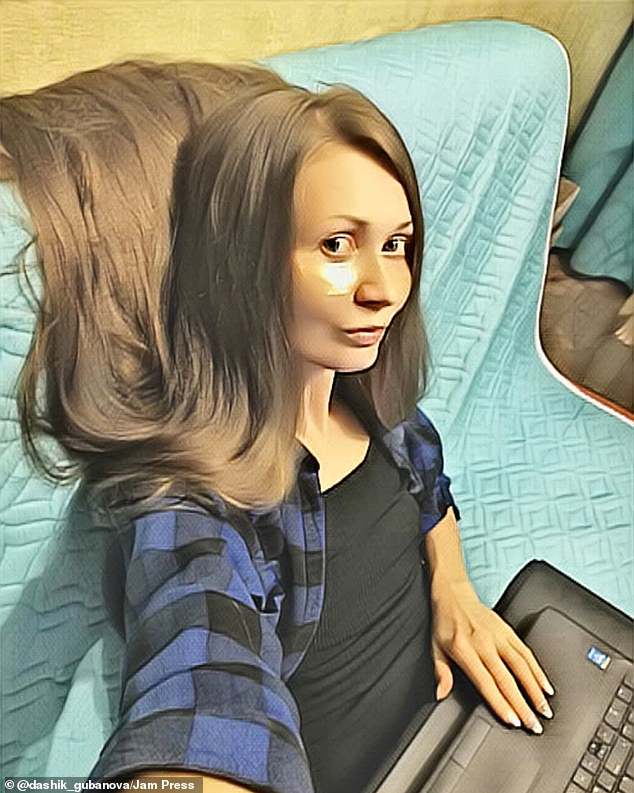 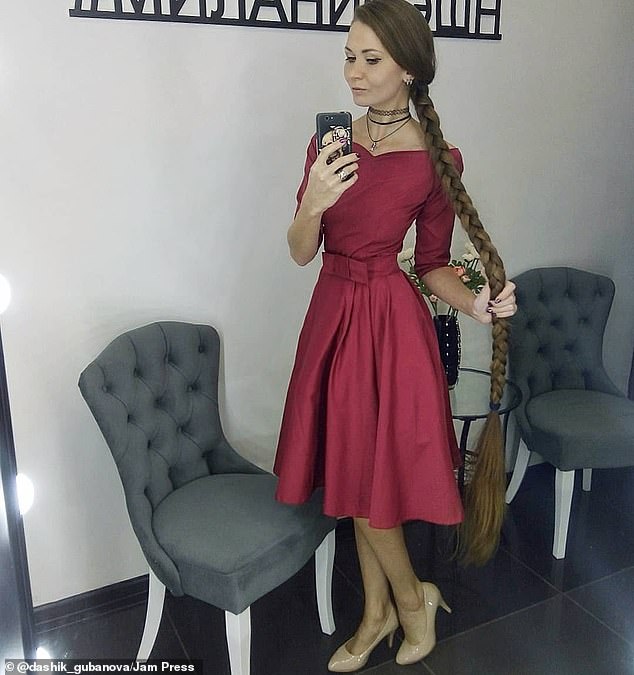 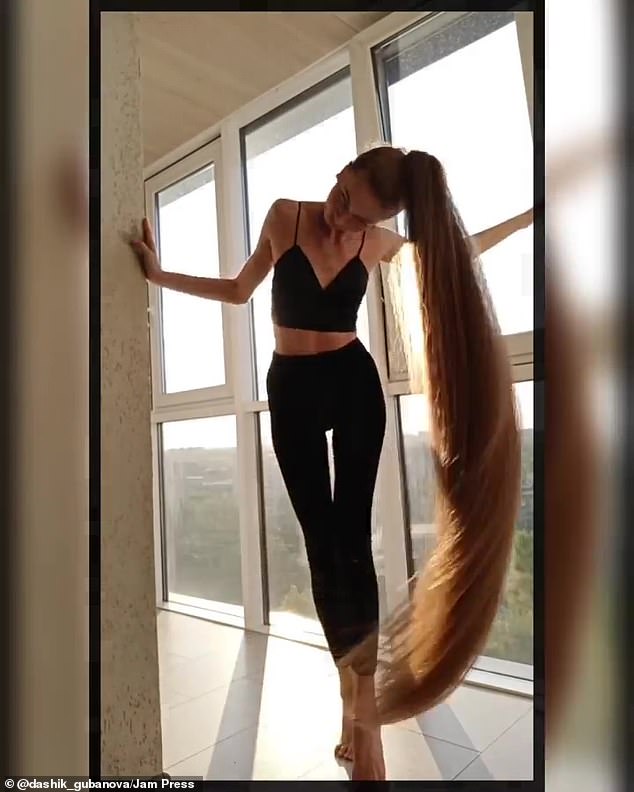 She uses sea buckthorn oil from Natura Siberica, as well as leave-in hair creams and fluids and last year launched her own shampoo brand 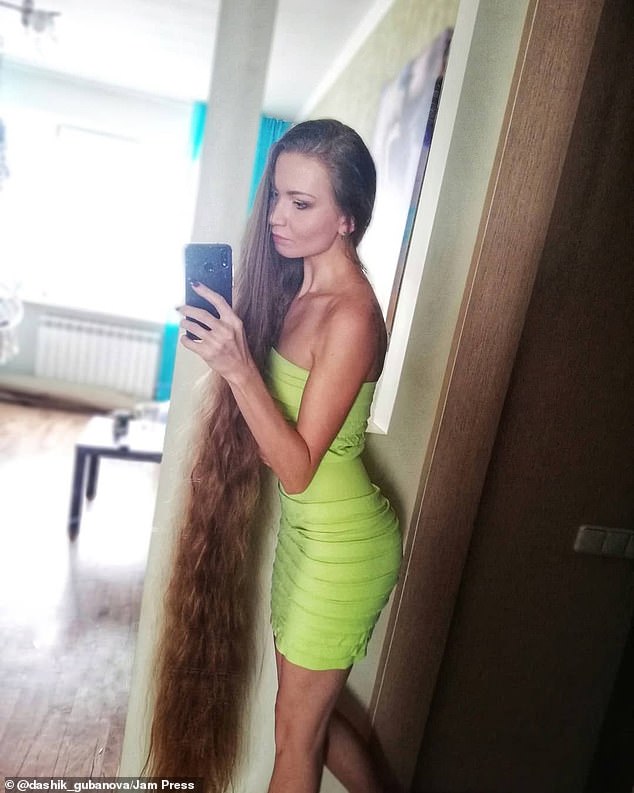 In the morning, Daira combs will comb and tie up her tresses, and never lets her hair down while walking in the street as her locks could catch onto things and get damaged.

She explains: ‘Last year, I released my own shampoo and hair balm together with Organic Kitchen – I am using them at the moment. I also use sea buckthorn oil from Natura Siberica and some leave-in hair creams and fluids.

‘In the morning, I comb my hair and style it in various braids or buns. I don’t walk down the street with my hair down as I can only afford to have my hair loose at home.

‘During the day, I redo my hair several times but, in the evenings, I comb my hair once more and style it in a loose braid. I go to bed with my hair loose so that my head can rest as it’s tied up all day long.’

As for haircuts, Daira cuts the ends of her hair slightly every year to keep her locks healthy and get rid of split ends.

Due to the length, she sometimes get into ‘hair’ accidents as her locks tend to get caught on things. 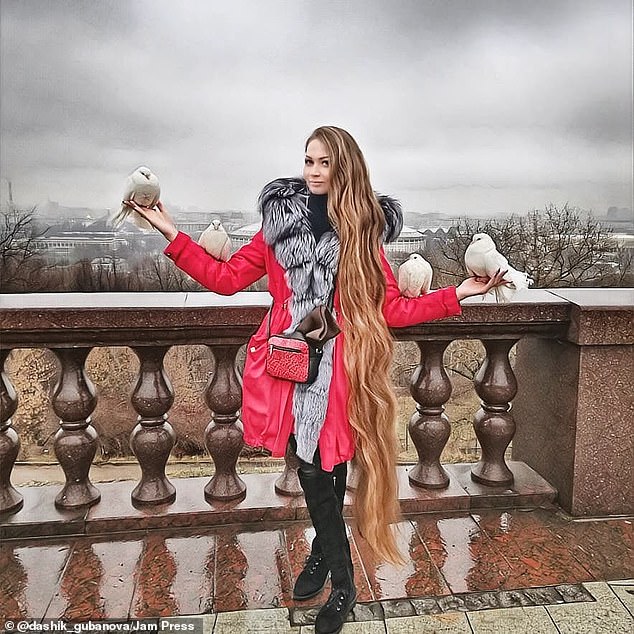 The airport worker and Instagram star says she rarely ventures out with her hair down, preferring to keep it tied up outside of the house 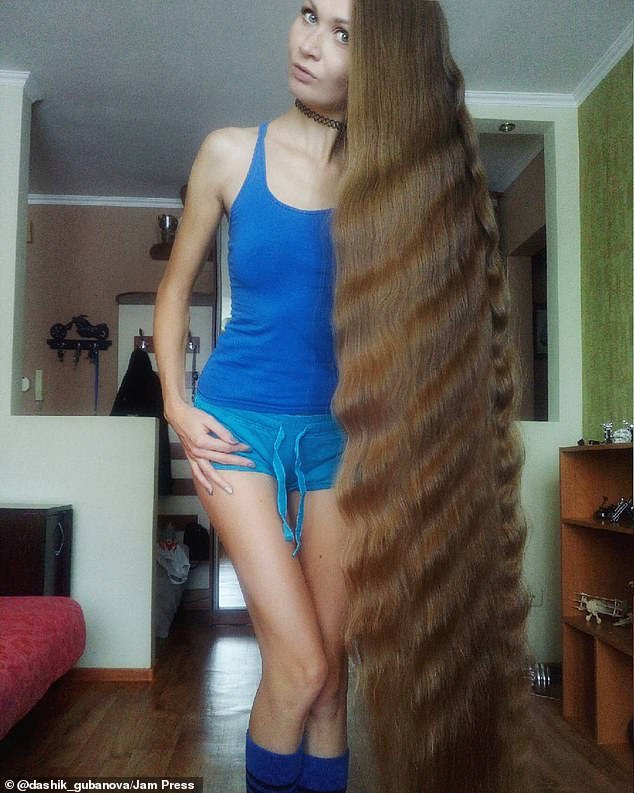 She says: ‘Women do not always react positively, and many do not understand how long hair should be managed’

She said: ‘My hair often clings to the doorknobs. Or on the buttons on my clothes and it takes a long while to untangle because my hair is so long.

‘Very often I hear this phrase, ‘your hair is lying on the floor’, which is when my hair accidentally slips out of my braid, and then everyone turns around to watch my locks dragging on the floor!’

Daira has received mixed reactions about her unique look but says that men often compliment it. 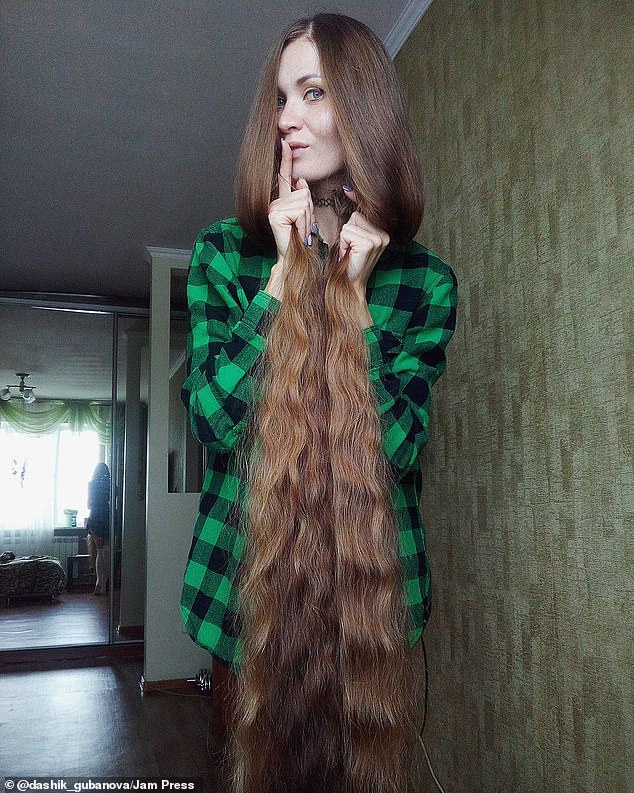 At night, Daira goes to bed with her hair loose to rest from it being ‘tied up all day long’

She said: ‘Men love my hair! Girls do not always react positively, many do not understand why long hair should be managed. Children and old people are delighted and love my locks!’

In a few words of advice to others who wish to grow their hair long, Daira added: ‘I would like to advise people to be patient when growing their hair. Do not spoil your hair and treat it with care. Love and care for it!’

Divorce Rates Are Now Dropping. Here Are Some Reasons Why.
World News