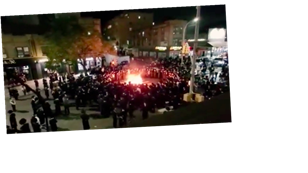 Hundreds of members of the Orthodox Jewish community in several Brooklyn neighborhoods took to the streets overnight on Tuesday to protest New York Governor Andrew Cuomo’s new coronavirus restrictions. At a large protest in Borough Park, a crowd started a fire in the street after midnight, burning masks and chanting, “Jewish lives matter.”

This week, Cuomo ordered nine New York City neighborhoods to return to lockdown in an attempt to address recent localized spikes in COVID-19 cases, also putting more than a dozen other zones under slightly looser restrictions. The highest restrictions include closing hundreds of schools and all nonessential businesses, banning mass gatherings, limiting restaurants to take out and limiting gatherings at places of worship to ten people.

All nine neighborhoods include a large Orthodox Jewish population — and the lockdown announcement falls in the middle of the holiday Sukkot.

“I have been very close to the Orthodox community for many years. I understand the imposition this is going to place on them,” Cuomo said during a press conference. “And I asked for them to work with me to follow these guidelines and that was positively received.”

But a large protest erupted Tuesday night in Borough Park, where hundreds of people gathered, many not wearing masks. Videos on social media show the crowd starting a bonfire in the middle of the street to burn masks.

Some protesters chanted, “Jewish lives matter,” while others chanted, “Donald Trump.” Resident Heshy Tischler addressed the crowd, saying that there would be “peaceful protests” every day. “You are my soldiers! We are at war!” He said.

Some of these videos circulating from last night in Borough Park are pretty incredible.

At least when the lockdowns were done by zip code, people understood that, even if imperfect. Now, Orthodox Jews feel their neighborhoods are being singled out. pic.twitter.com/AzkeL3nyw8

The NYPD made no arrests, but at least one Hasidic person was apparently assaulted and injured during the protest, reportedly for calling on the community to wear masks. Videos of the attack show protesters calling the man a “snitch.”

Some in the community condemned Tischler on Twitter and called on the NYPD to arrest the attackers. Mayor Bill De Blasio said during a news conference on Wednesday that he is aware of the incident, adding that there will be “consequences” for people who commit acts of assault.

“It’s crucial that those who disagree still respect the fact that the state and city have made this decision for the health and safety of all,” de Blasio said. “People have and will protest and we understand there is a place for peaceful protest, but the NYPD will not tolerate people doing harm to others, there will be no tolerance for assaults, for damage to property, for setting fires, anything like that is unacceptable.”

Update: One person in critical condition — being transported to Maimonides Hospital — after beaten with rocks by protesters at the anti-Cuomo protest in Borough Park early this am pic.twitter.com/aGIYgst91p

Local Hasidic leaders slammed Cuomo in an open letter on Tuesday, claiming they were not involved in decisions involving lockdowns in their communities.

“Though we are the representatives of ‘hotspot’ neighborhoods, we have been disincluded from conversations with the governor and his leadership team as they made devastating decisions affecting the people we serve,” wrote Senator Simcha Felder, Assemblyman Simcha Eichenstein, Councilman Chaim Deutsch & Councilman Kalman Yeger.

The letter claimed Cuomo told them synagogues would be able to operate at 50% capacity, just hours before limiting gatherings at houses of worship to no more than 10 people, regardless of a building’s capacity.

“This is about mass gatherings. And one of the prime places of mass gatherings are houses of worship,” Cuomo said during a news conference on Tuesday. “I understand it’s a sensitive topic but that is the truth, period.”

During his press briefing, Cuomo shared images specifically highlighting gatherings by the Orthodox Jewish community. One of the photos was apparently from 2006 — Cuomo senior advisor Rich Azzopardi tweeted that it was a staff error, saying that the photo was replaced during the briefing.

“Governor Cuomo’s choice to single out a particular religious group, complete with a slideshow of photos to highlight his point, was outrageous,” they wrote. “His language was dangerous and divisive, and left the implication that Orthodox Jews alone are responsible for rising COVID cases in New York State.”

What a scene as Borough Park Jews protest. pic.twitter.com/8aD64F4ww6

Bishop Nicholas DiMarzio of Brooklyn called the new rules “outrageous” in a statement.

“We fervently object to being told to further reduce capacity, because we have strictly adhered to COVID-19 protocols, and the safety measures have been working,” he wrote. “The safety of parishioners is paramount for the Diocese of Brooklyn, but the religious freedom of our parishioners is being unjustly attacked.”

“It is outrageous that after incurring great expense to implement all the safety protocols, our parishes are being forced to reduce capacity to a maximum of 10 people in the red zone and 25 people in the orange zone,” he added. “To think that some of our churches have the capacity to hold a thousand people for Mass, a capacity range of 10 to 25 people is disrespectful to Catholics and to the clergy who all have followed the rules and, as such, have prevented a spike in COVID cases within the confines of the hot zones.”