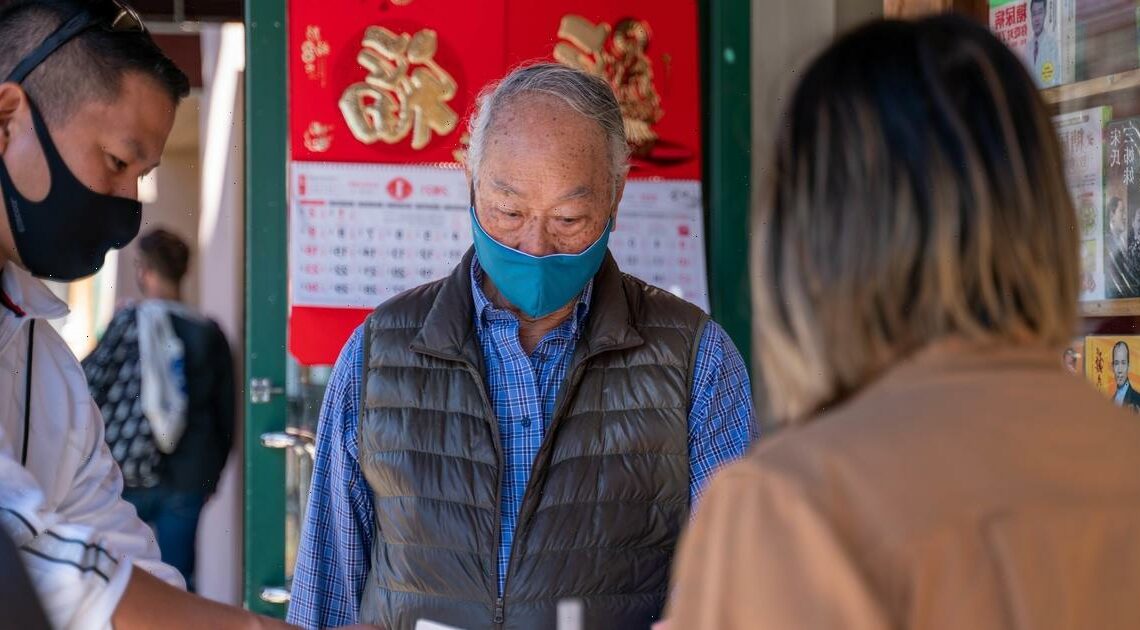 After a mass shooting spree that killed six Asian women in Atlanta-area spas and a string of streetside attacks targeting Asians, Asian American communities across the country have scrambled for ways to protect themselves.

In Oakland, a crowdfunding campaign has raised more than $107,000 to hire private, armed security guards to watch over the city’s Chinatown. In a post on the crowdfunding page, organizer Joanna Au wrote, “The local city officials have failed to protect members of our community and it’s time we take matters into our own hands!”

Au, who grew up in Oakland and is enrolled in school near Chinatown, decided to raise money for the guards after she became fed up with the attacks on Asian elders in the Bay Area. In February, 84-year-old Vicha Ratanapakdee died after he was shoved to the ground by a stranger on his morning walk. In March, a 56-year-old Army veteran was called an Asian slur and punched until his face swelled. And late last month, 76-year-old Xiao Zhen Xie was punched in the face while waiting at a traffic light before fighting off her attacker with a stick. 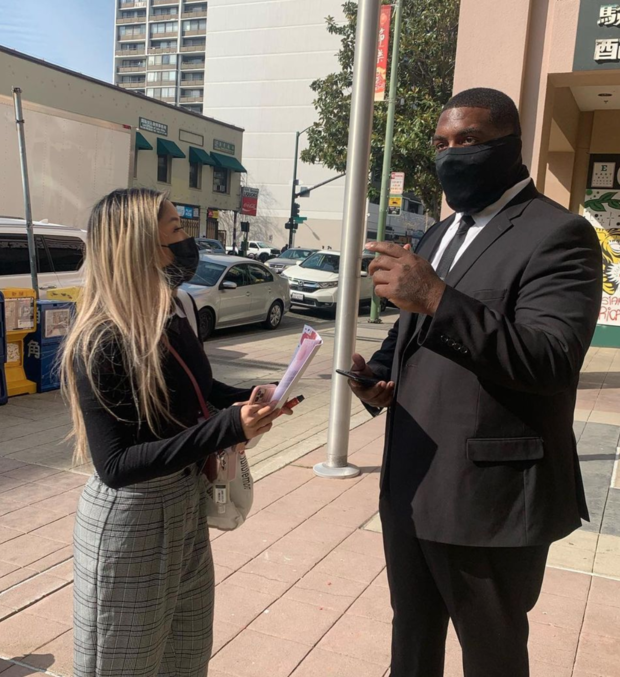 As the Lunar New Year approached in February, Au hoped the guards would deter attackers during the holiday week. She ended up raising four times her original goal — enough to keep the guards in place through April. She has since launched another fundraiser, which has raised over $10,000 so far, aimed at buying security cameras for the neighborhood.

Au said the security guard firm, Goliath Protection Group, will stand guard in public spaces but will not enter private businesses. The company said in a statement, “We are concerned for the community due to the attacks on innocent elders. Racism is wrong and this needs to stop.” 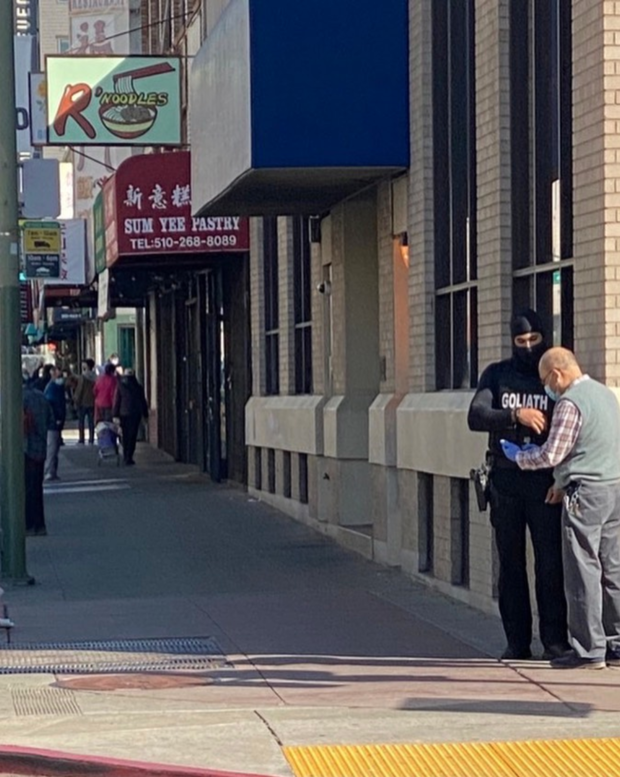 Reports of anti-Asian hate crimes rose nearly 150% in major U.S. cities last year, with the surge first growing alongside COVID-19 cases in March and April. Researchers found that racist rhetoric — including from the former president, who has referred to COVID-19 as the “Chinese virus” and the “Kung-flu” — correlated with incidents of racism against Asian Americans.

The department shut down a separate, approximately 600-person undercover policing unit last year during protests for racial justice. Shea described that unit as a vestige of the city’s controversial “stop-and-frisk” policing policies and said it had accounted for a disproportionate percentage of the department’s shootings and complaints.

When announcing plans to add undercover officers to Asian neighborhoods, Shea said, “The next person you target, whether it’s through speech, menacing activity or anything else, walking along a sidewalk or on a train platform, may be a plainclothes New York City police officer, so think twice.”

Last week, when a 50-year-old woman named Sharon Williams threatened violence and screamed at Asian people inside and near a New York nail salon, she apparently didn’t know she was yelling at an undercover NYPD officer. Police said she called the undercover officer a “Chinese motherf*****” and told him he brought coronavirus to this country. She was arrested by the officer’s backup team and charged with aggravated harassment as a hate crime and criminal trespassing.

Her arrest was one of two so far by the department’s undercover officers in Asian communities. In the second case, police said 35-year-old Juvian Rodriguez approached an undercover officer near Penn Station and shouted anti-Asian statements at him. Rodriguez was charged with a number of crimes that included harassment as a hate crime and menacing as a hate crime, as well as criminal possession of a controlled substance.

Police forces across the country — including in Chicago, Houston and Philadelphia — announced they’d increased the number of police patrols in predominantly Asian neighborhoods.

In Los Angeles, police say they increased police patrols and launched a campaign in seven languages to encourage victims to report crimes.

“We just want to get the message out that if they’re a victim of crime, to report it,” LAPD spokesperson Tony Im said. “If there’s a trend and we can track it, then we can send undercovers in that area.”

In San Francisco, off-duty firefighters coordinated their own response, volunteering to patrol the streets of Chinatown and hand out information about a newly launched tip-line, according to CBS News affiliate KPIX. “We all know the police officers can’t be everywhere,” said John Choy of the San Francisco Fire Department. “We wish.”

San Francisco police guided the group, KPIX reported. “While we don’t want them to act on criminal activity, we do want everyone to be safe, to keep the members of the community safe, and to watch out for the elderly and vulnerable,” San Francisco Sheriff Paul Miyamoto told KPIX. “It’s a way to connect immediately and to get us the information as soon as we can so we can act on it.”

But some, like Grace Pai, director of organizing for Asian Americans Advancing Justice in Chicago, are concerned about solutions that are based on policing.

“Asian Americans have also, like other communities of color, been negatively impacted by policing — especially Muslim and South Asian, working-class and limited English proficient community members,” Pai said. “And so we’re really attuned to the risks of that right and want to be thinking instead about how can the city of Chicago be investing resources in immigrant communities to improve language access, to improve outreach and access to government services.” 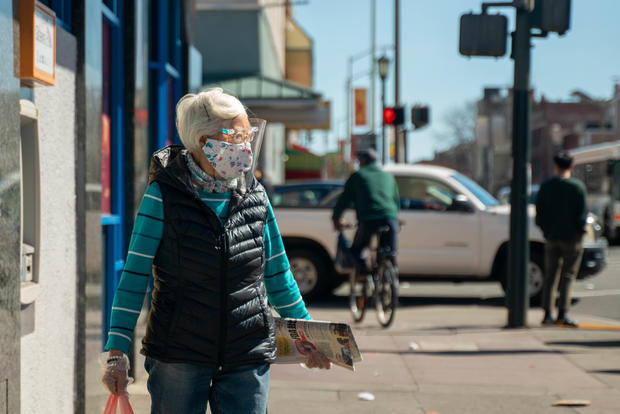 Timmy Lu, executive director of Asian American Pacific Islanders for Civic Empowerment, based in the Bay Area, noted that Oakland’s Chinatown neighborhood is only a few blocks away from the Oakland Police department.

“That proximity hasn’t lessened the feeling of being threatened and being targeted within our communities,” Lu said.

Lu’s group is focused on developing medium- and long-term solutions to violence, including housing and direct services, and he believes non-policing alternatives haven’t been given “a full shot.”

Volunteer-based initiatives have sprung up in response to the violence. In Brooklyn, a woman raised money to pay for cab rides for Asian women, elderly Asian people and Asian members of the LGBT community who were afraid to take public transit. In Manhattan, a group called Chinatown Block Watch has convened groups throughout the pandemic to check in with neighbors and walk the streets with walkie-talkies and body cameras, ready to record or alert authorities if they run into a hate incident.

Lu said, “I do think that some of those efforts should be systematized by the city, and resourced so that we’re having, you know, ambassadors, so like non-police folks who are trained in de-escalation and just kind of keeping an eye on things in the street,” Lu said. “And I think what we’ve seen in our sort of short-term pilots is that that has made an impact.” 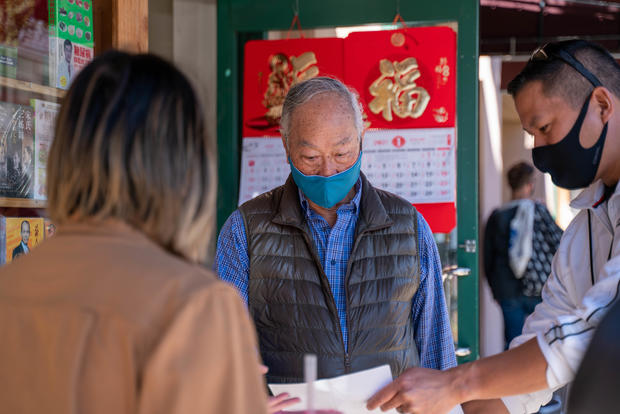 In early February, an Oakland resident named Jacob Acevedo posted on social media, offering that he and his dog could chaperone anyone who felt unsafe in the Oakland, Chinatown neighborhood. His post went viral, and along with four other volunteers, he turned his offer into an organization called Compassion in Oakland, which fields requests to walk people home from work, helps with translations and distributes personal safety alarms to seniors.

After the Atlanta-area shootings, the group was flooded with offers to help. They’ve now received more than 2,000 applications to help volunteer.

Acevedo, who founded the group, is Latino, and the group is made up of volunteers from all races. “Oakland in general is a really diverse community. And that’s what really makes them such a strong community. So, when they started seeing these things happening in their neighborhood, it wasn’t just Asian Americans that raised their hand to come and volunteer,” said Linda Huang, a spokesperson for the group.

“Their main mission is about spreading compassion,” Huang said. “They really want to show the strength in community.”

Americans say clean sheets, having a picnic, & receiving compliments are their 'simple pleasures'