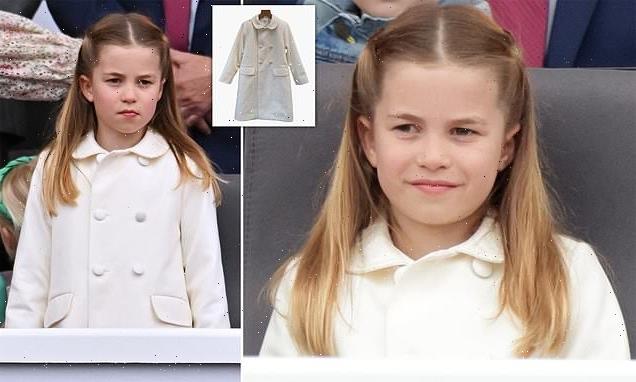 Perfectly poised! Princess Charlotte, 7, is the picture of elegance as she wears a £140 white Amaia coat to the Platinum Jubilee Pageant

Princess Charlotte was perfectly poised as she attended the Platinum Jubilee Pageant with her family today.

Sporting a white £140 Amaia summer coat, the seven-year-old sat alongside her older brother Prince George, eight, and Prince Louis, four. The coat appears to be a firm favourite of the young royal’s since she also has a version in navy.

She wore her long locks pinned back into two plaits as she watched the action at the pageant outside Buckingham Palace, also joined by her mother the Duchess of Cambridge, 40 and father the Duke of Cambridge.

The Camrbridges were joined by Charles, Camilla, Zara and Mike Tindall, and Princesses Beatrice and Eugenie and their husbands in the royal box, set at the end of the 2½-hour procession.

It is not known if the 96-year-old Queen will make an appearance at today’s pageant, after she pulled out of two Jubilee events amid concerns for her health.

The pageant is split into four acts: For Queen and Country with a military parade; The Time of Our Lives progressing through seven decades of culture, music and fashion; Let’s Celebrate telling the story of the Queen’s life in 12 chapters with corgi puppets and carnival creations; and the Happy and Glorious musical spectacle. 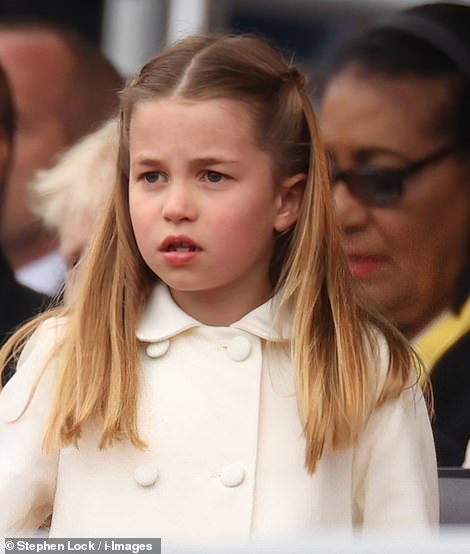 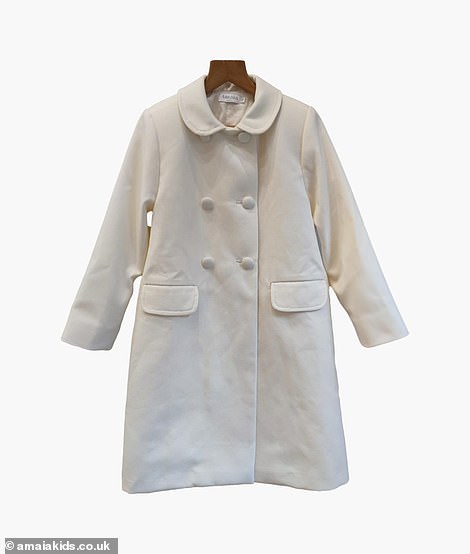 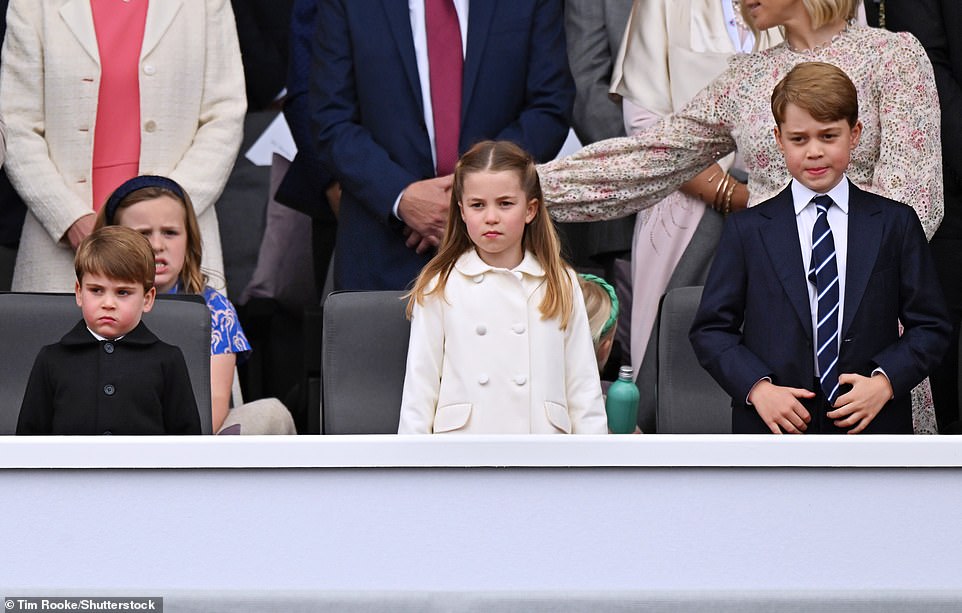 She wore her long locks pinned back into two plaits as she watched the action at the pageant outside Buckingham Palace, also joined by her mother the Duchess of Cambridge, 40 and father the Duke of Cambridge 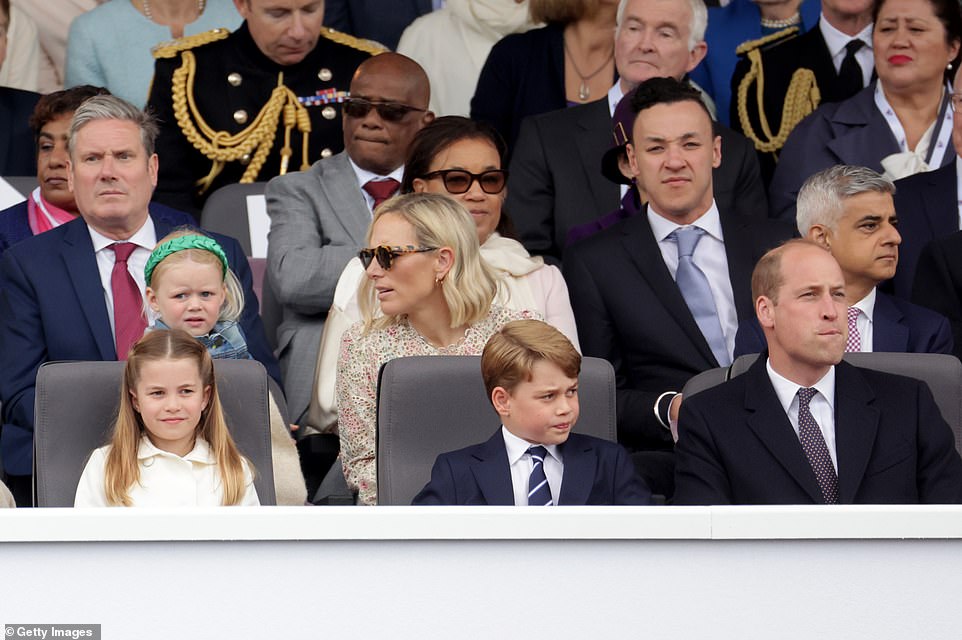 The Camrbridges were joined by Charles, Camilla, Zara and Mike Tindall , and Princesses Beatrice and Eugenie and their husbands in the royal box, set at the end of the 2½-hour procession

The seven-year-old has worn different variations of the Amaia coat before and it appears to be a firm fashion favourite of hers. She was seen wearing the coat yesterday as she went to Cardiff Castle for a royal engagement with her mother, father and brother George.

Yesterday, the little royal wore a navy blue version of the button up coat dress from Amaia London, which she previously wore to Prince Philip’s memorial service in March of this year.  It is described to have a fitted shape and is a warm, easy to wear coat for children.

A hologram of the young Queen waving at royal fans down The Mall has been beamed onto the Gold State Coach, as royals and politicians gather outside Buckingham Palace to watch today’s spectacular £15million Platinum Jubilee Pageant.

Prince Charles and Camilla, Duchess of Cornwall, the Duke and Duchess of Cambridge, their children George, Charlotte and Louis, Princess Anne, and Zara and Mike Tindall are all seated in the royal box alongside Boris Johnson and his wife Carrie, Keir Starmer and Sadiq Khan to watch the incredible two-mile procession through central London. 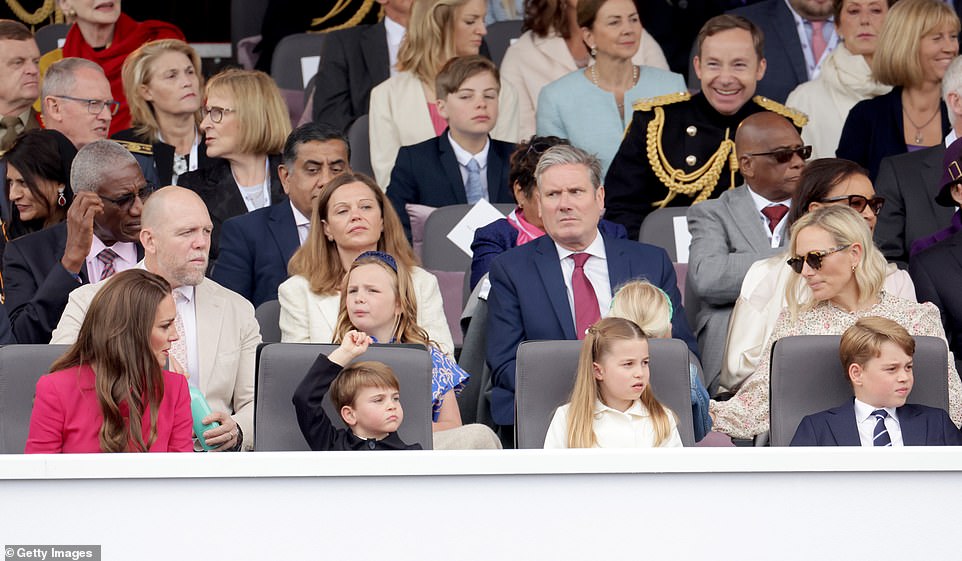 Kate, Louis, Charlotte and George sit in the royal box at the Platinum Jubilee pageant on the last day of celebrations 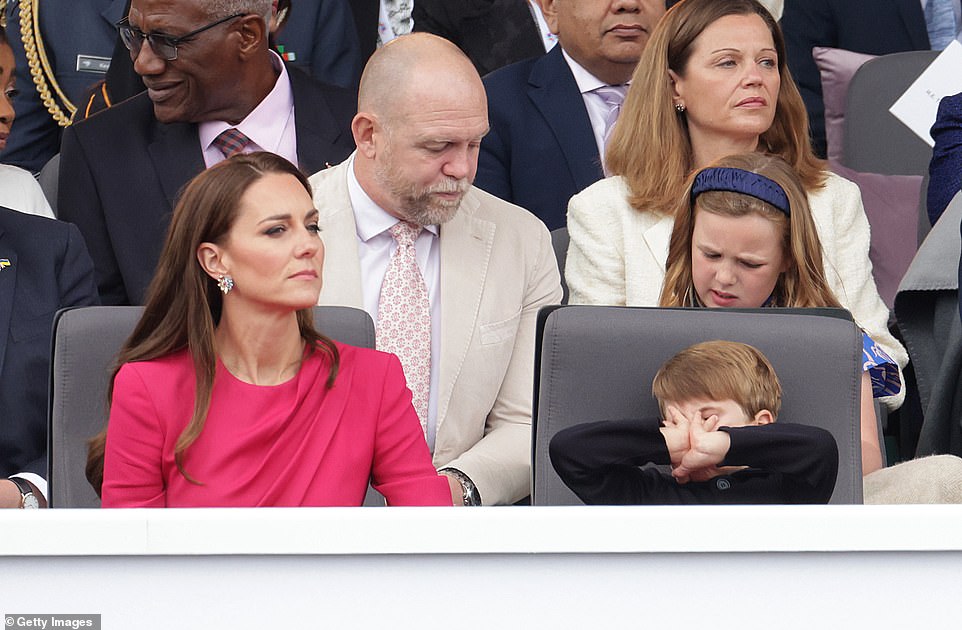 Some 10,000 people including a cast of 6,000 performers are involved in staging the carnival route from Horse Guards, along Whitehall to Admiralty Arch and down The Mall to Buckingham Palace, echoing Her Majesty’s 1953 coronation procession.

A peloton of 300 cyclists, riding vintage bikes from across the seven decades of the Queen’s reign, is to travel down The Mall led by Sir Chris Hoy and cycling golden couple Dame Laura and Sir Jason Kenny.

Close to 200 national treasures will take to the stage to serenade the Queen by singing the national anthem at the grand finale of the Platinum Jubilee festivities. Stars including Sir David Jason, Harry Redknapp, Sir Cliff Richard, Sandie Shaw, Felicity Kendal, Joe Wicks and Holly Willoughby will join Ed Sheeran in a mass rendition of God Save The Queen outside Buckingham Palace at the end of the pageant.

Among the cast of colourful characters preparing to take part in the Jubilee parade on Horse Guards is a group of Daleks from the sci-fi television programme Doctor Who, threatening passers-by that they will be ‘exterminated’ as they roll along with cultural icons from the 1960s in the decade-by-decade Time of Our Lives act of the pageant.

Two bus preservation enthusiasts have described their delight at taking part in the Platinum Jubilee Pageant.

Richard Dixon, 63, and Ivan Fisher, 42, co-own one of the buses – the 1950s bus – with their friend John Stewart which is taking part in the decorated open-top double-decker bus parade for the decade-by-decade celebration. Mr Dixon will be a ticket conductor on the 1950s bus while Mr Fisher will be driving the 2000s bus.

Mr Fisher, who is a funeral director, said: ‘It took us nine hours to get here from Norwich as she’s got a top speed of 32mph.

‘We came Thursday last week so that they could decorate them and put the wraps on them. It took nine men nine hours for each bus. The gentleman who owns the 2000s bus was approached by the pageant committee and asked if he knew of anyone who could contribute a bus, and we jumped at the chance because it’s a big privilege to be involved.’ 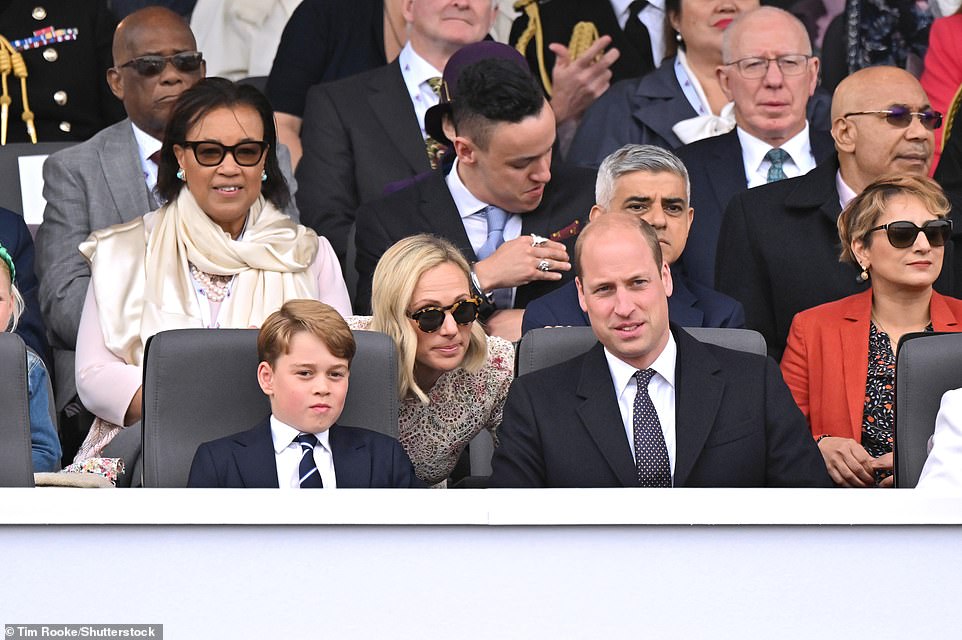 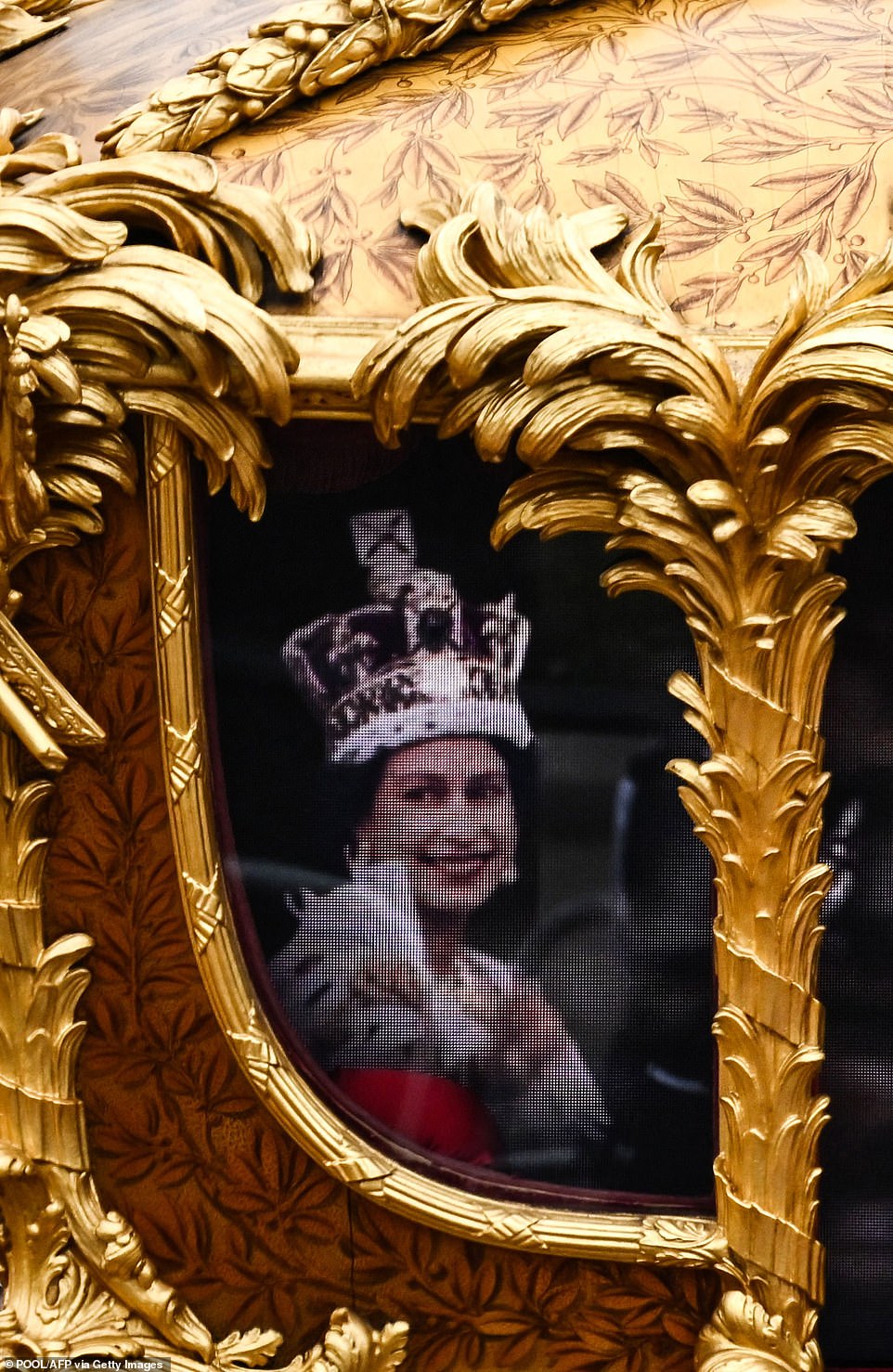 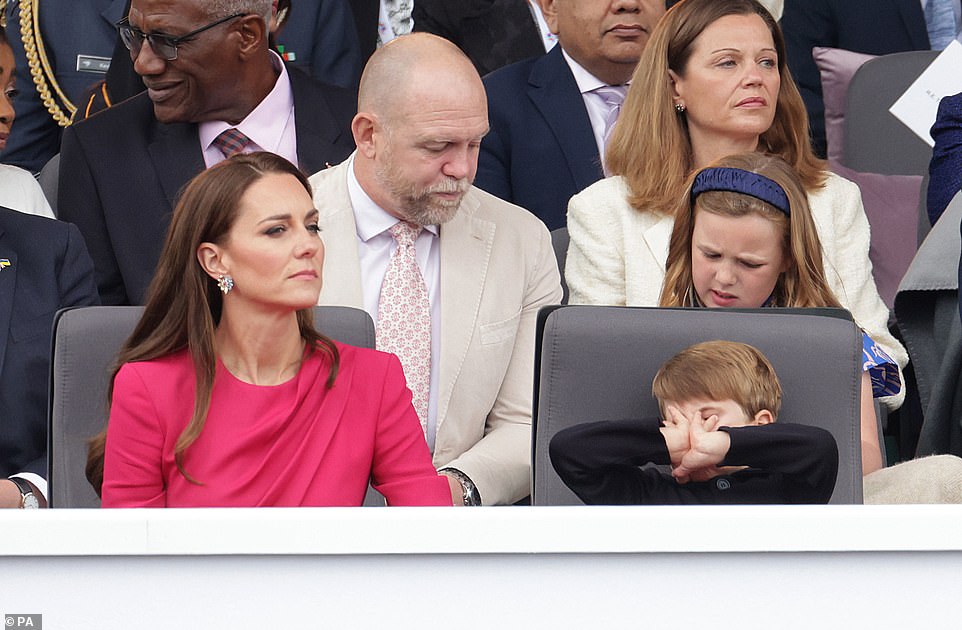 The Duchess of Cambridge, Prince Louis, Mike Tindall and Mia Tindall during the Platinum Jubilee Pageant in front of Buckingham Palace, London today 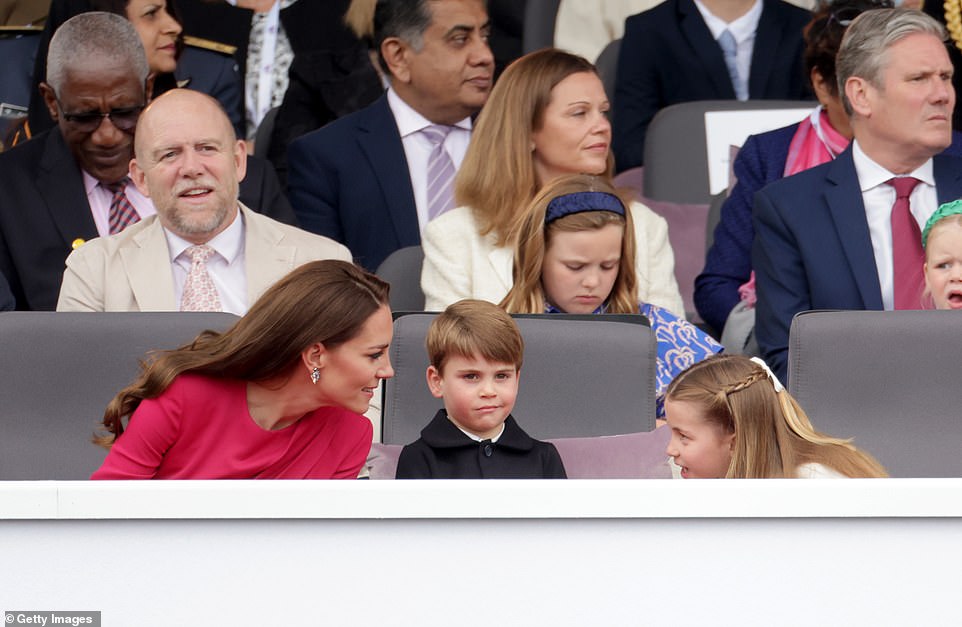 Meanwhile, millions up and down the country will gather for 85,000 Big Jubilee Lunches, street parties, picnics and barbecues today, as Platinum Jubilee celebrations draw to a close.

Last night the Prince of Wales called the Queen ‘Mummy’ and described how ‘you laugh and cry with us and, most importantly, you have been there for us’ in a moving, personal tribute to Britain’s longest-serving head of state after the Buckingham Palace concert.

The monarch received affectionate tributes from the Prince of Wales and national figures during Saturday night’s Platinum Party at the Palace that saw Sir Rod Stewart, Diana Ross and Duran Duran perform for thousands in The Mall.

And in a comic sketch that delighted the nation, the Queen had tea with Paddington Bear and revealed, like the furry character, she is partial to a marmalade sandwich.

Paying tribute to the monarch after his son the Duke of Cambridge’s rallying cry for climate change action, Charles, who was joined by his wife Camilla, said: ‘You pledged to serve your whole life – you continue to deliver.’ 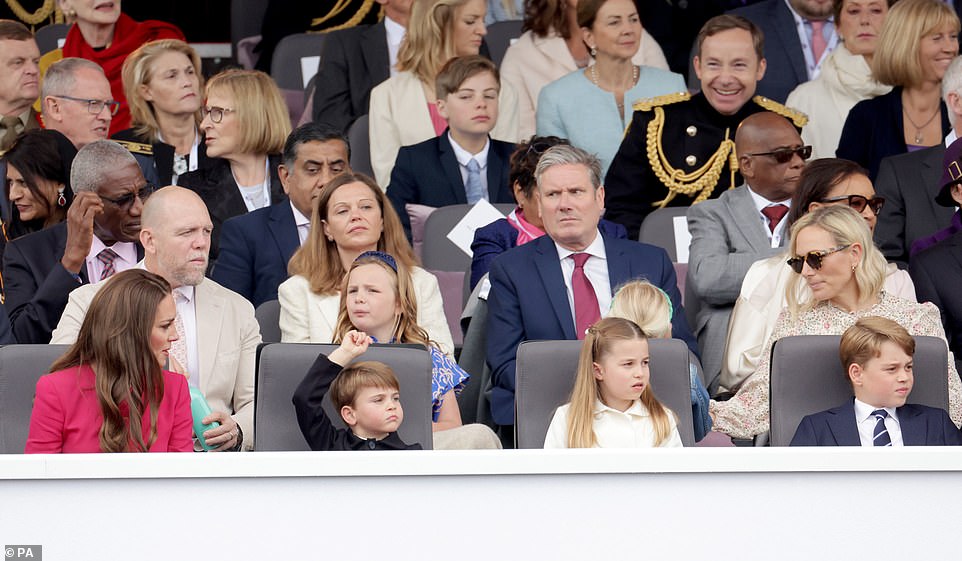 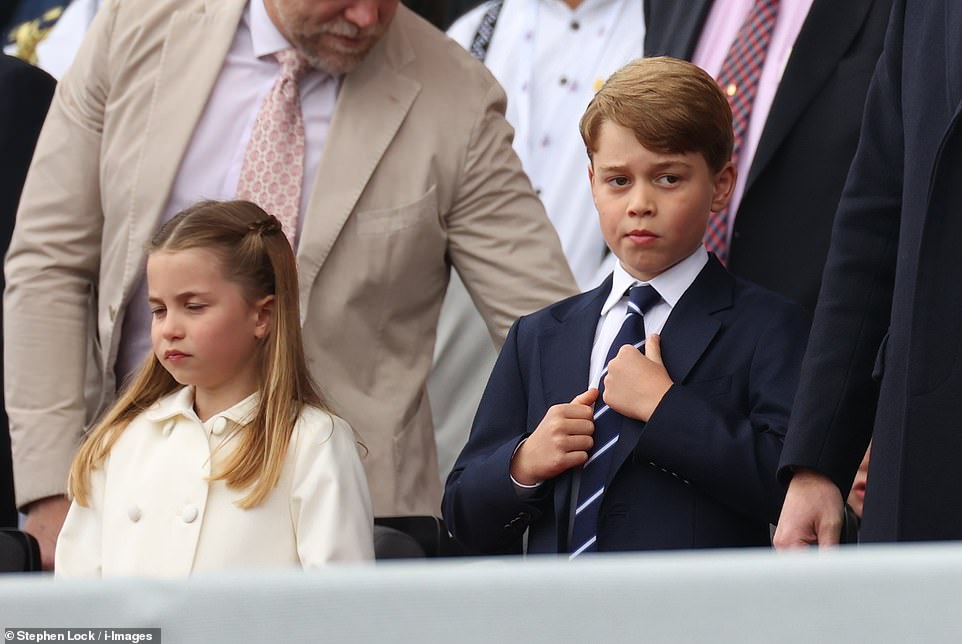 Prince George and Princess Charlotte stand in the royal box during the Platinum Jubilee Pageant, June 5, 2022 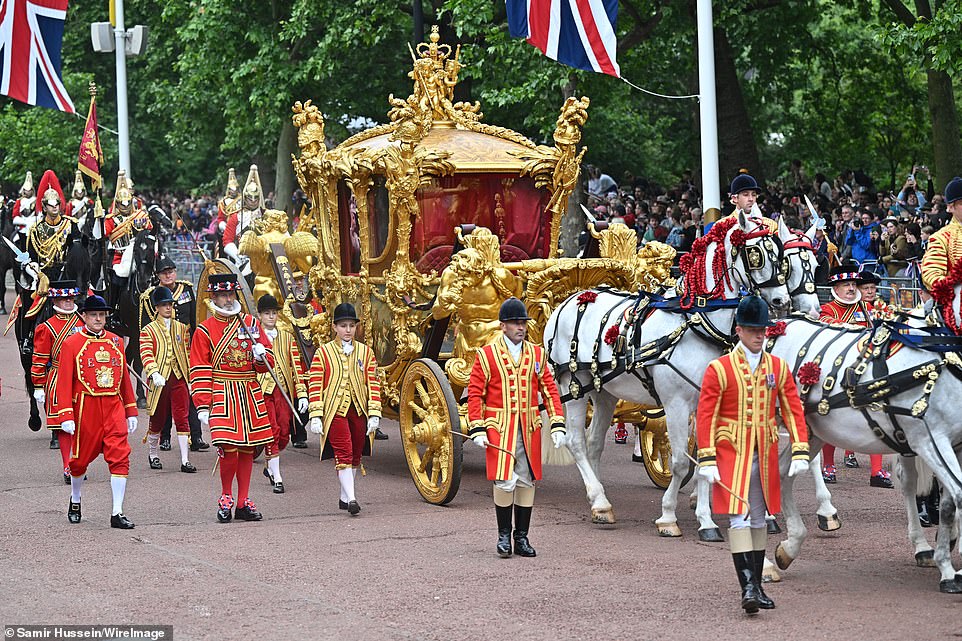 Original golden coronation carriage with hologram of the Queen is seen during the Platinum Pageant on June 5, 2022 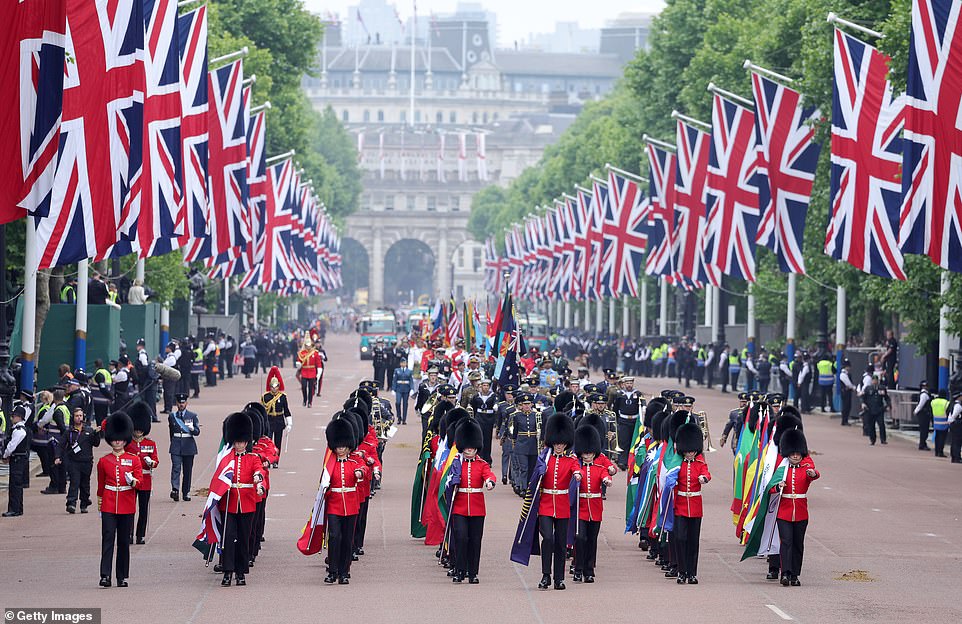 Members of the Military march along the Mall during the Platinum Pageant on June 5, 2022

The future king, who began his heartfelt speech with ‘Your Majesty, Mummy’ just as he did at the Diamond and Golden Jubilee pop concerts, told the Queen: ‘You have been with us in our difficult times. And you bring us together to celebrate moments of pride, joy and happiness.’

He added: ‘You have met us and talked with us. You laugh and cry with us and, most importantly, you have been there for us, for these 70 years. You pledged to serve your whole life – you continue to deliver. That is why we are here. That is what we celebrate tonight.’

Charles reflected on the Queen’s every-growing family, which now stretches to 12 great-grandchildren, and on her dual role as sovereign and royal matriarch. He said: ‘Your family now spans four generations. You are our Head of State. And you are also our mother.’

And in a touching moment, Charles spoke of his ‘much missed’ late father the Duke of Edinburgh, calling him ‘My Papa’ and saying the Queen’s late husband Philip was there ‘in spirit’.

Last night the Duke of Cambridge hailed the Platinum Jubilee concert as full of ‘optimism and joy’ as he praised the Queen for her ‘hope’ in the future of the planet.

William paid tribute to the positive outlook of his grandmother during a segment of the Platinum Party at the Palace dedicated to the environment and featuring Sir David Attenborough.

He echoed the Queen’s words from her speech to the Cop26 UN Climate Change summit, when she said working together in a ‘common cause’ always gave rise to hope.

The duke highlighted the efforts of ‘visionary environmentalists’ and went on to name broadcaster and naturalist Sir David and spoke about the pride he felt for ‘my grandfather and my father’, the Duke of Edinburgh and Prince of Wales, who have championed the natural world.

Brit arrested for 'assaulting his wife' hours after they got married