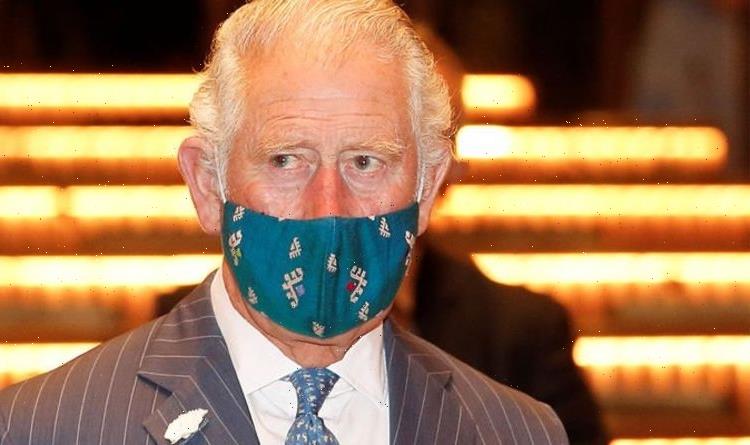 Prince Charles, 72, visited bank Goldman Sachs’ new European headquarters in London on Wednesday. The future king is a champion of environmental causes and was there to endorse the new building’s carbon emissions-cutting features.

Clarence House shared photos and footage of the Prince’s latest outing on Twitter.

“Founded in 1869, the company delivers a broad range of financial services across investment banking, securities, investment management and consumer banking to a large and diversified client base.”

A second followed up: “The sustainability features built into @GoldmanSachs’ new HQ result in a 25% reduction in annual CO2 emissions.”

The tweet went on: “His Royal Highness hears about the firm’s leading role in sustainable finance.”

A third tweet was accompanied by a clip of Charles unveiling a plaque on the bank’s roof and read: “Up on @GoldmanSachs’ stunning Roof Garden, His Royal Highness unveils a plaque to commemorate the visit.”

Daily Express royal correspondent Richard Palmer was present during the visit and tweeted a video of Charles during the tour.

The prince seemed rather awkward during the unusual engagement, a body language expert has claimed.

Body language analyst and author Judi James examined photos and footage from the tour and shared her insights.

The expert told Express.co.uk: “Visiting Goldman Sachs today did appear to provide the Prince with a bit of a body language dilemma.

“It’s not his usual kind of visit and the way the interns were lined up didn’t make it look like a normal day at the office, either.”

The future king settled for formal body language in the end and treated the lined-up members of bank staff as if they were “troops on parade”.

Judi added: “In the end Charles appears to have settled for the kind of rituals that he might use when he’s inspecting troops on parade, walking down the line of workers with one hand part-stuffed in his jacket pocket in a rather awkward-looking truncated ritual after chatting to a small group that clapped him on arrival.”

The prince played on his “desire to be popular” when meeting groups of people, Judi claimed.

She added: “The prince also seems to have played to the crowd a little here, hinting at a desire to look popular.”

Charles adopted a celebrity-esque wave rather than a more reserved royal flick of the hand.

Judi added: “His high waving hand gesture was less of a tempered royal wave and more something a little bit celebrity.”

Touching on the “hidden costs” of modern industrial farming, the eco-conscious Prince said: “The fact that these costs are hidden encourages us to ignore them; for example, our current approach is forcing many small family farms to the wall.

“If they go, it will quite simply rip the heart out of the British countryside and break the backbone of Britain’s rural communities.”

He added: “If we regenerate degraded soils around the world, we could capture as much as 70 percent of the world’s carbon emissions, so you can see farming can play a big part in protecting the planet.”