Home » Lifestyle » Plenty to digest in One Night in Miami, but is it worthy of the Oscars buzz? 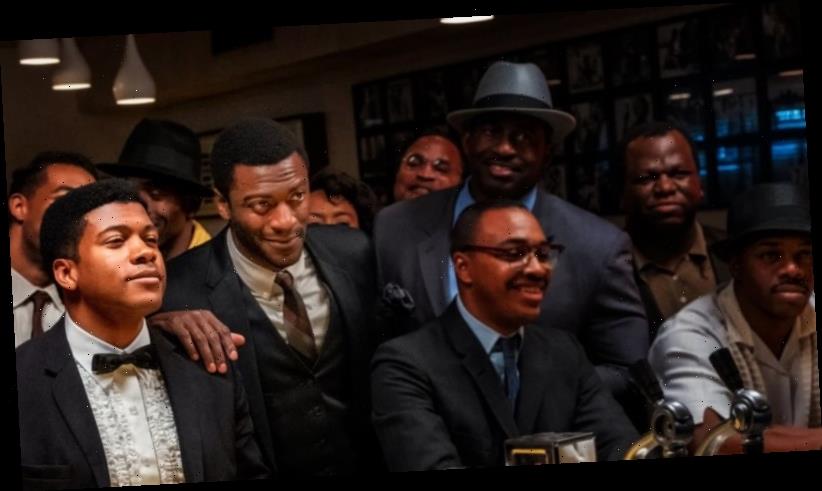 Plenty to digest in One Night in Miami, but is it worthy of the Oscars buzz?

On the night of February 25, 1964, four of the most influential African American men of the era came together in a hotel in Brownsville, Florida, to celebrate Cassius Clay’s victory as heavyweight champion of the world, earlier that night. 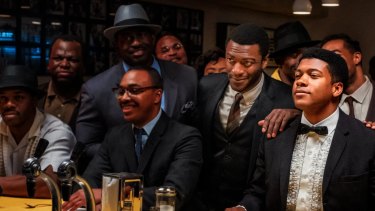 One Night in Miami is a fictional account of a meeting in 1964 between Muhammad Ali, Malcolm X, Jim Brown and Sam Cooke. Credit:Prime Video

There is a photo, showing Malcolm X holding a camera and smiling, just about to take a picture from behind the bar of a cafe. Seated at the bar on the right is a beaming Clay in black bowtie – 22 years old, and the new ‘champeen’. He would soon announce his conversion to Islam and a change of name to Muhammad Ali. The other icons present that night were Jim Brown, one of the greatest football players the NFL had ever seen, and Sam Cooke, the groundbreaking and successful soul singer.

That meeting is just too good an artefact for a writer to ignore, especially a playwright. Whether it might work as a film is another matter. 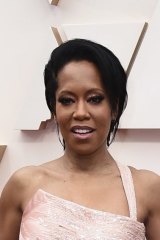 Kemp Powers’ play about this night premiered in Los Angeles in 2013, to much acclaim. It was his debut and ran 90 minutes, in one act. Kemp worked with Regina King on the film adaptation, which runs 24 minutes longer, largely because it adds a series of encounters at the start, to establish each character’s experience in the world. We see Jim Brown visit the Georgia home of a plantation owner (Beau Bridges), who congratulates him warmly on his football career before demeaning him with a racial slur. We also see Clay’s fight with Sonny Liston (Aaron Alexander), which Clay was not expected to win. Eli Goree is so good as Ali, so convincing in his physical characteristics as a fighter, that I would happily have seen the movie continue with his life story. Goree is scarily close to Ali’s mannerisms, vocal as well as physical. Regina King stages the fights to show the beauty, rather than the brutality, of Clay’s style. Then, we settle into a well-filmed rendition of the play, set for most of its duration in a hotel room in Brownsville – away from the main part of Miami, where blacks are not allowed to stay.

This is King’s first feature, after a stellar career as an actor, and confining the action to the room increases the pressure, as these four powerful men discuss politics, race and power, but it means the film can never escape its origins. Those scenes in the preamble show us what King might have done with the film, had she been prepared to risk it. That she wasn’t is partly practical, because keeping scenes in a controlled setting is cheaper. She is also keeping faith with the power of the original play, presumably because that is what made her want to film it in the first place. The price is that it limits the film’s sense of reality. Theatrical conflict and filmic conflict are different, most of the time. No matter how good the dialogue, we are always aware of being inside a theatrical construction.

That said, it’s hard to disagree with much else about the way King directs the piece, especially her casting. The English actor Kingsley Ben-Adir is uncanny as Malcolm X, who has come to Miami to make sure that his new protege, Cassius Clay, will announce his conversion to Islam. Clay is having doubts, and has no idea that Malcolm is about to leave the Nation of Islam to found his own organisation. Aldis Hodge as Jim Brown has the grace and poise of a super-athlete, confident of his powers. He speaks less than the others, but Hodge plays him like a sage, quiet and forceful. Leslie Odom Junior gives Sam Cooke a kind of restless energy, bubbling with aggression. His recreation of Cooke’s singular vocal style is superb.

Much of the conflict flows from Malcolm’s anger with Cooke: his pretty love songs are doing nothing for the cause. Cooke responds that making money in music, employing other artists and selling records, does plenty for the only cause that matters, economic equality. In the context of the last year in American politics, the film has plenty to digest, even though it was written before the era of Black Lives Matter.

Find out the next TV shows, streaming series and movies to add to your must-sees. Sign up to get it every Thursday.

CategoryLifestyle
TagsDigest in Night One Plenty to