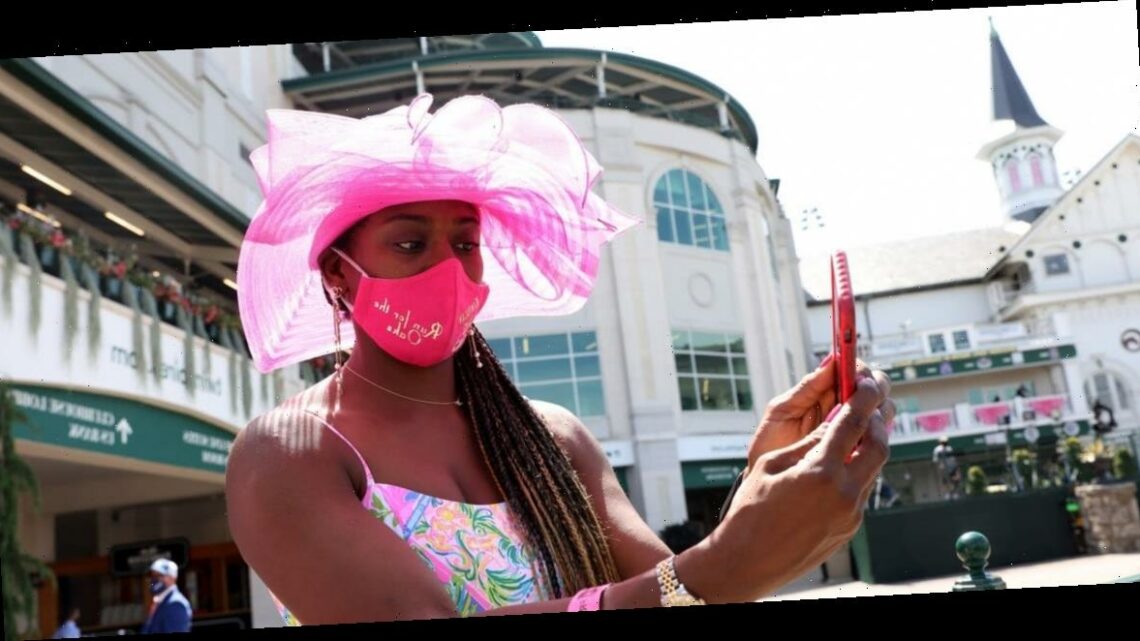 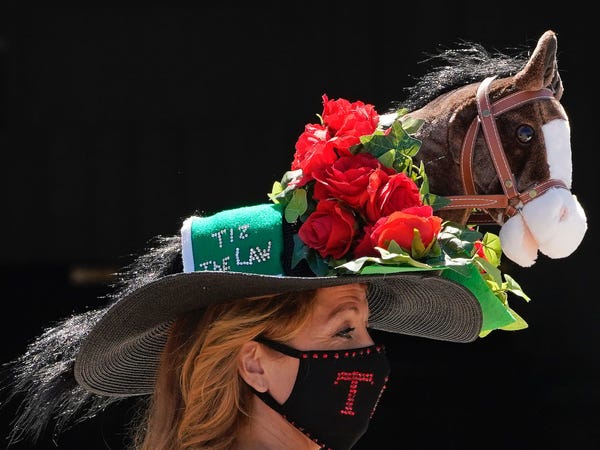 The traditional sound of the bugle kicked off the 146th annual Kentucky Derby on Saturday. 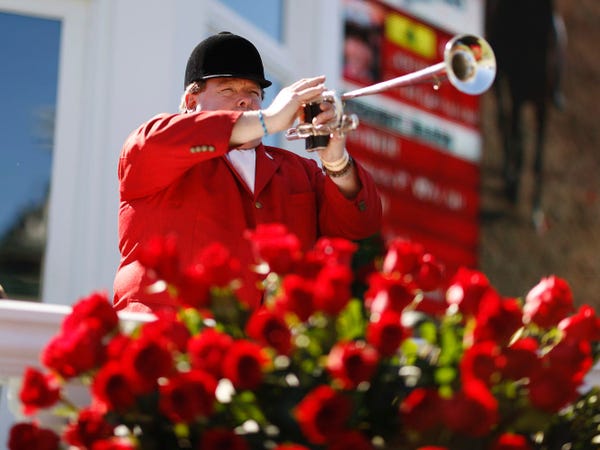 The Kentucky Derby is a horse race that's taken place in Louisville, Kentucky, since 1875. It's considered one of the longest-standing sporting events in American history.

Other than the sound of the bugle, this year's horse race is much quieter — after all, the stands are nearly empty. 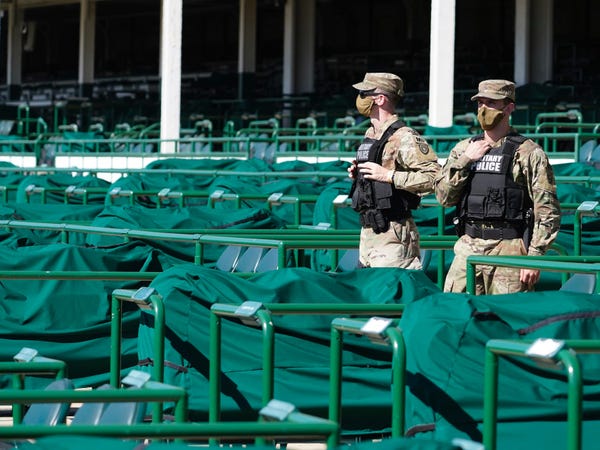 On August 21, the Kentucky Derby announced that the event would take place on September 5 without fans allowed in the stands at Churchill Downs, the event's famous venue in Louisville, Kentucky.

"The Kentucky Derby is a time-honored American tradition which has always been about bringing people together. However, the health and safety of our team, fans, and participants is our highest concern," the Derby wrote in a statement.

The coronavirus pandemic postponed the Kentucky Derby from its traditional May date for the first time since World War II. 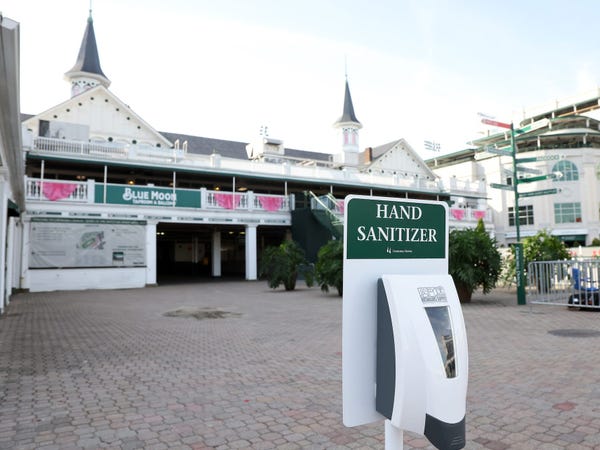 Major world events and crises, including the Great Depression and World War I, didn't halt the traditional horse race, and its occurrence in May.

In 1945, horse racing was banned because it was seen as a waste of resources; men that could have served in World War II were working on horse tracks, and betting on horse races was wildly popular at the time, according to the Associated Press.

The ban caused the Kentucky Derby to be postponed until that June.

Mint juleps, the traditional cocktail of the Kentucky Derby, aren't flowing like usual. 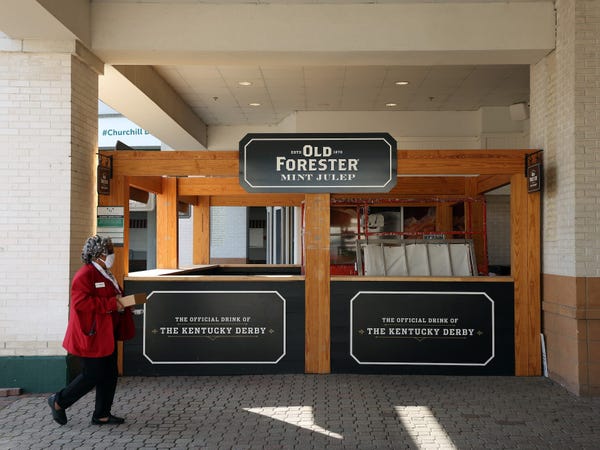 The Derby's famous drink, the mint juleps, is made with bourbon, mint leaves, and sugar.

Some 120,000 of the signature cocktails are typically served during the two-day period of the Kentucky Derby weekend.

The stands at Churchill Downs appear sparse, but select spectators preserved the Derby's traditions, like sipping the classic cocktail. 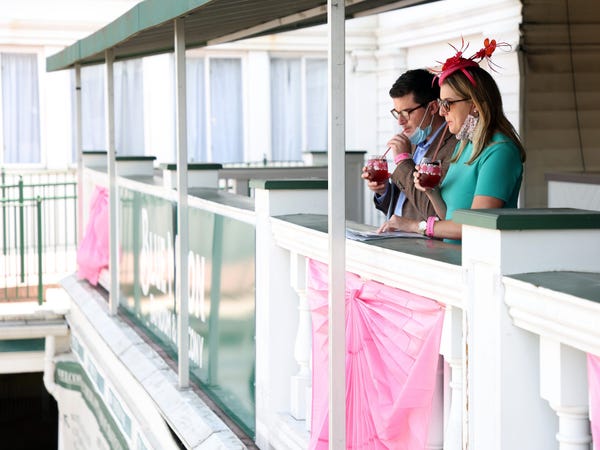 Only people connected to horse owners and jockeys, including family members, are allowed to attend this year's Derby.

Some people gathered at Churchill Downs on Friday, dressed in pink for Kentucky Oaks Day, which marks the racing of female horses. 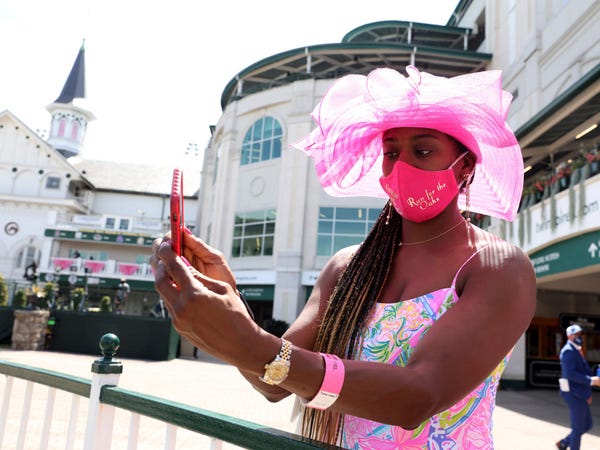 The Kentucky Derby weekend starts with Oaks Day, where spectators traditionally wear pink — in recent years, people are encouraged to wear the color as a way of supporting survivors of breast cancer and ovarian cancer. The Churchill Downs venue is historically also decorated in matching pink bunting. 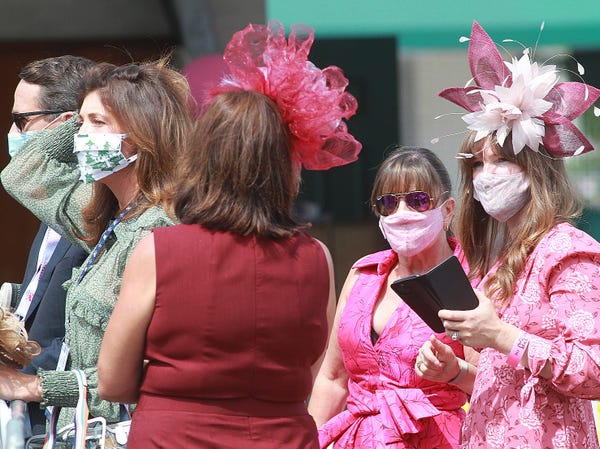 Bold outfits and eye-catching hats have been a long-standing convention of the Derby.

Fashion statements were still abundant at the Derby even though attendance was sparse. 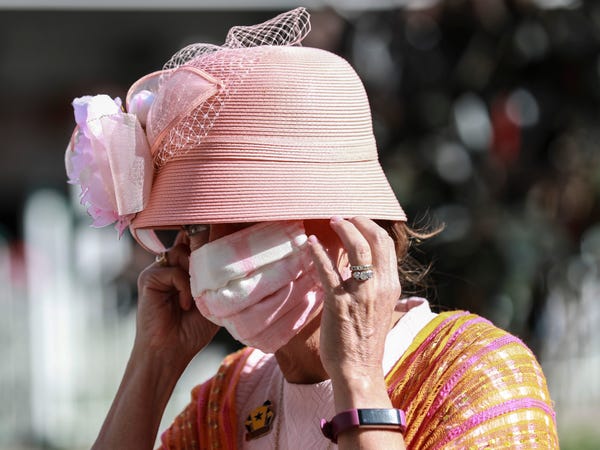 Some horse trainers, track workers, and spectators showed up in Derby-themed face masks. 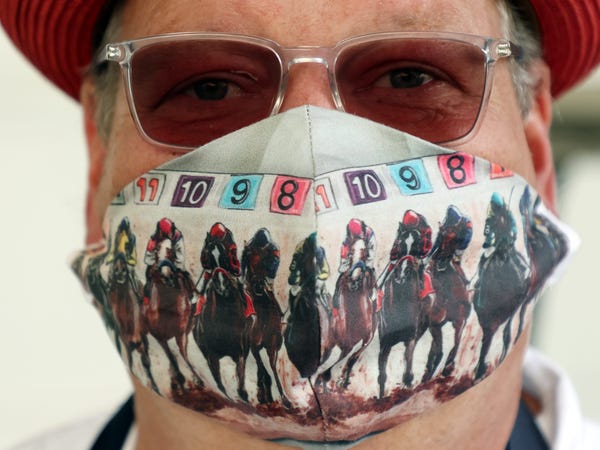 Some viewers sported vivid pastel colors, another fashion convention that's often seen in the crowds at the Derby. 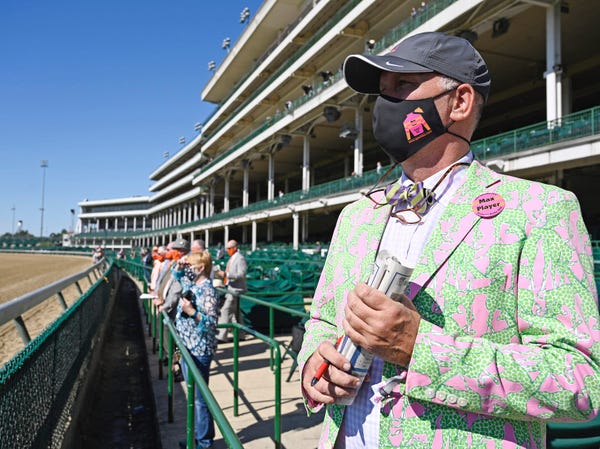 "Sun-drenched, tropical colors in bold stripes or busy plaid and bright pastels steal the limelight," reads the Kentucky Derby's "What to Wear" guide.

While most fans sported their Derby fashions from home, people still showed up with festive hats. 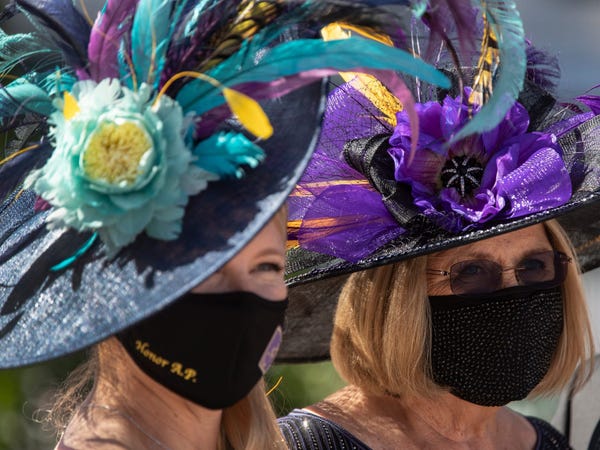 "Wearing a hat to the Kentucky Derby is believed to bear good luck," according to the event's official website.

Some matched their face masks to their outfit, such as this pink-and-navy ensemble. 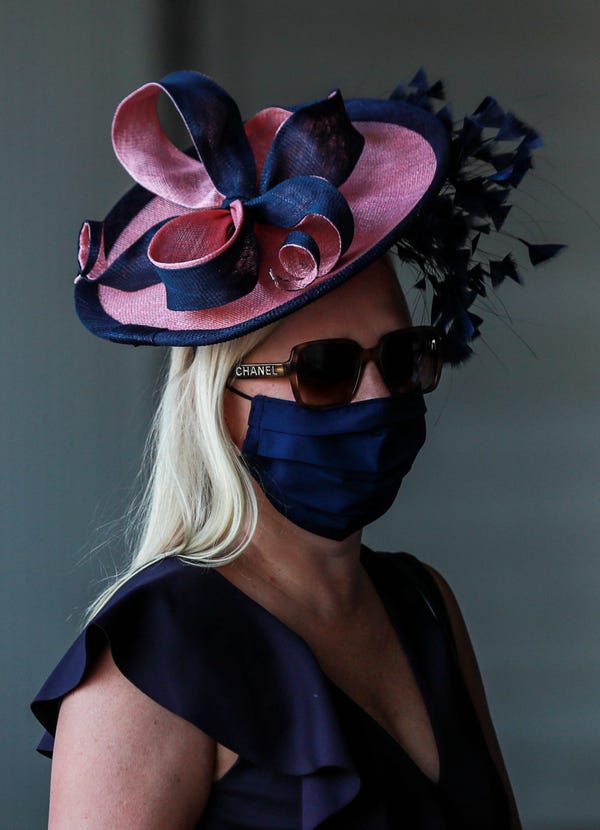 Over the years, people have worn a number of memorable hats and fascinators — often adorned with flowers and ribbons — to the event.

Another attendee coordinated their eye-catching, feather-clad hat with an ornate, pearl-covered mask. 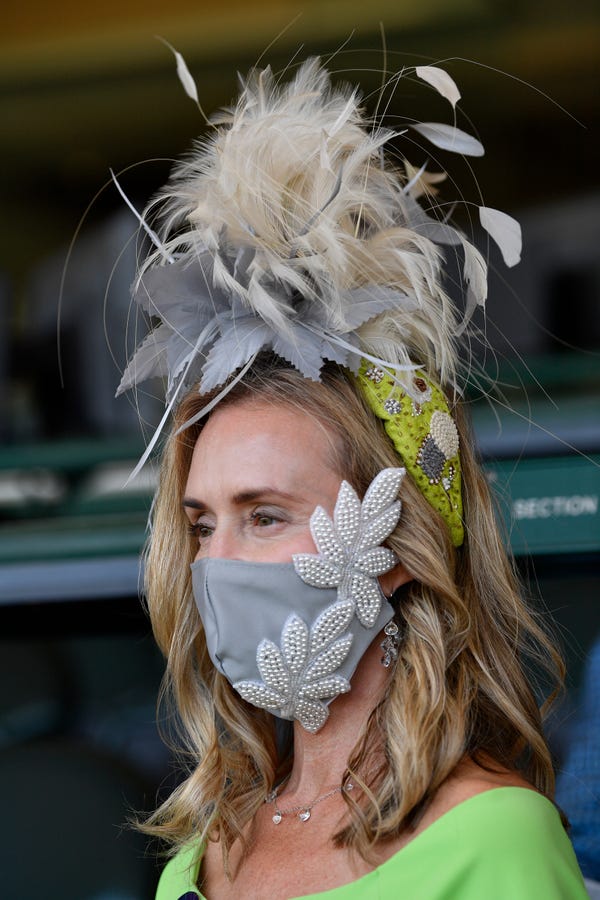 Others used their hat and face mask combination to show their support for contestants, such as this attendee, who's rooting for the favorite horse, Tiz the Law. 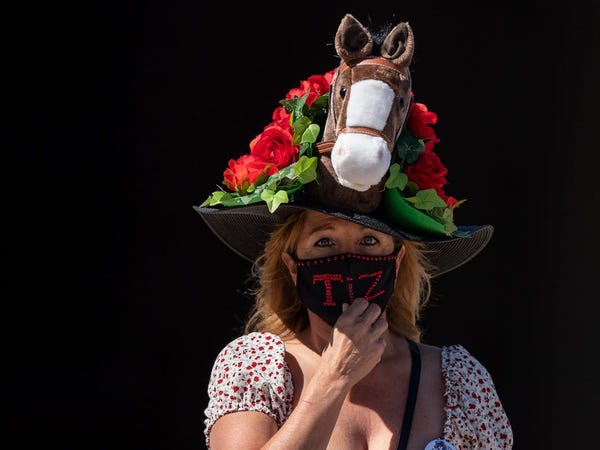 While much is different at the Derby this year, the event still includes 20 horses who are competing at the prestigious race. 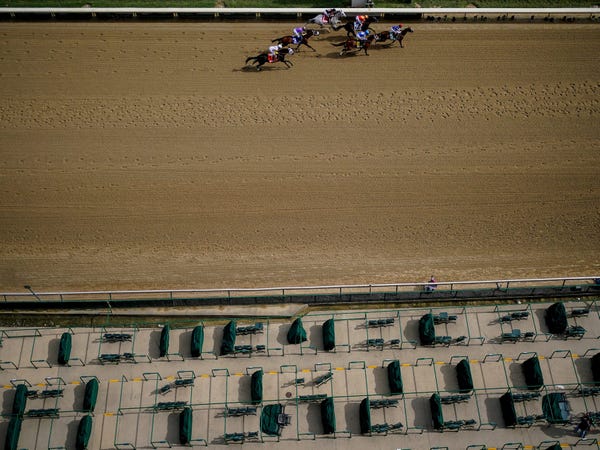 I'm A Celebrity 2020: Ant and Dec could be haunted by Gwrych Castle's Countess