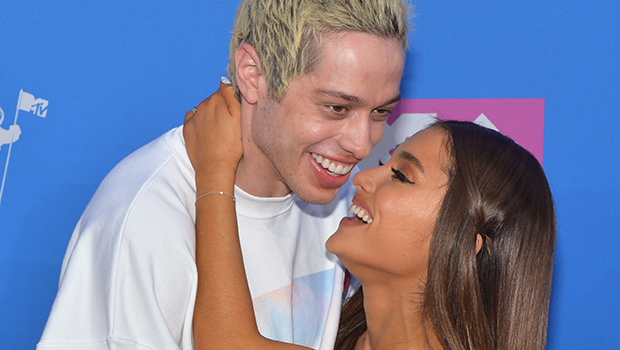 Pete Davidson ‘Loved’ Ariana Grande’s Shout-Outs In ‘Thank U, Next’ Video: He ‘Wasn’t Expecting’ It

Ariana Grande’s “Thank U, Next” video arrived on Nov. 30, and there was one specific part that had fans f-r-e-a-k-i-n-g out. Ari shockingly shouted out her ex-fiance, Pete Davidson in the clip! In her very own burn book from the Mean Girls centric video, she said she’s still got love for her ex, and HollywoodLife EXCLUSIVELY learned just how Pete felt about it. “Pete was really moved by Ariana’s ‘Thank U Next’ video. He found it really touching that she included such a sweet and loving shout out to him. Pete wasn’t sure what to expect, but Ariana is a total sweetheart so he wasn’t bracing himself for anything bad or nasty, but still, he wasn’t expecting anything quite so loving,” a source close the the comedian shares. “The fact Ariana drew a large heart around his name, and wrote ‘l luv u always’ and ‘Huuuuuge’ gives him hope that they may still be able to work things out—which, is something Pete would love, with all his heart,” the source adds.

At one point in the video, Ariana even apologized about her split with the ‘SNL’ star, and that really hit Pete hard. “Pete was really touched by the fact Ariana included an apology to him for the break-up, and he loves that it was so subtle that most people would miss it if they blinked. Pete has watched the video a whole ton of times since it came out, and he noticed Ariana had written “Sry I dipped” above his name immediately, and it made his heart soar,” the source said. “Pete’s never stopped loving Ariana, and the video has strengthened those feelings even more, in addition to his desire to win her back again in the future.” HollywoodLife has reached out to Pete’s rep for comment.

That wasn’t the only surprise reference Ari’s burn book held. Another one of her exes, Big Sean, was mentioned too! The pop star used her burn book to hint that she’s still crushing on her former flame. Next to a photo of her smooching Sean, Ari drew a heart around his name and added the caption, “So cute. So Sweet. (Could still get it).” Um, does this mean there’s a chance these two could reconcile their romance?!

Regardless of what her burn book said, Ariana has made it clear she’s working on herself these days. As she says in the song’s lyrics, “This one gon’ last, cause her name is Ari, and I’m so good with that.”