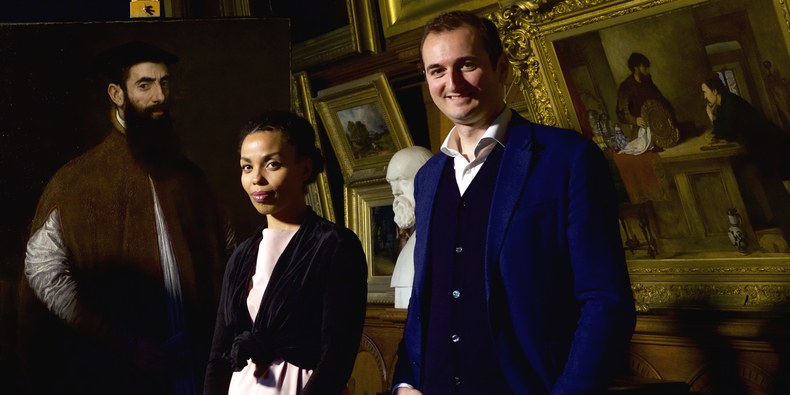 Sometimes, Dr. Bendor Grosvenor, an art historian best known for the BBC series Fake or Fortune? and Britain’s Lost Masterpieces, recovers and restores priceless paintings. Other times, Grosvenor’s beloved cat Padme has other ideas. Over the weekend, the British news outlet the Telegraph reported that Padme had wrecked a piece in which Grosvenor had invested nearly £10,000, or nearly $15,000.

According to the Telegraph, Grosvenor was midway through a restoration of a portrait by Baroque painter John Michael Wright when the cat “launched itself” at the small canvas, clawing the piece and undoing four years of work. Grosvenor acquired the painting in 2015 for £5,250, and he estimated he “spent the same again cleaning and reframing it.” When he bought it, the painting was in relatively good condition, with just two small tears in it—the result of the canvas stretcher moving after being improperly climate-controlled—and he was in the midst of fixing it up and readying it to be shipped to London when “up jumped our cat, landing forcefully in the center of the painting with a crunch,” he told the Telegraph.

“Disaster,” Grosvenor went on. Its relatively good condition, after all, was partly why he bought it in the first place. (Wright, a 17th-century Baroque artist who mostly worked in portraiture, is also one of Grosvenor's favorite artists.) “Now, it’s obviously in less-good condition,” Grosvenor conceded, though he said he believes it can still be fixed—though it’s likely he’ll have to sink the purchase price into the work all over again. (“At least the cat landed on his”—the portrait subject’s—“clothing, and not his face,” he said, probably not even trying to be funny about it.)

Padme (relation to Natalie Portman’s Star Wars character unclear), per Grosvenor, is “not a fan” of Wright, the artist, and “regrets nothing.” It’s not currently known what artists the cat actually does enjoy.

Dog owner banned from having pets after terriers became barrel-shaped

Khloe Kardashian Vs. Kylie Jenner: Which Sister Is Your Fave Twinning With Their Baby Daughters?
World News