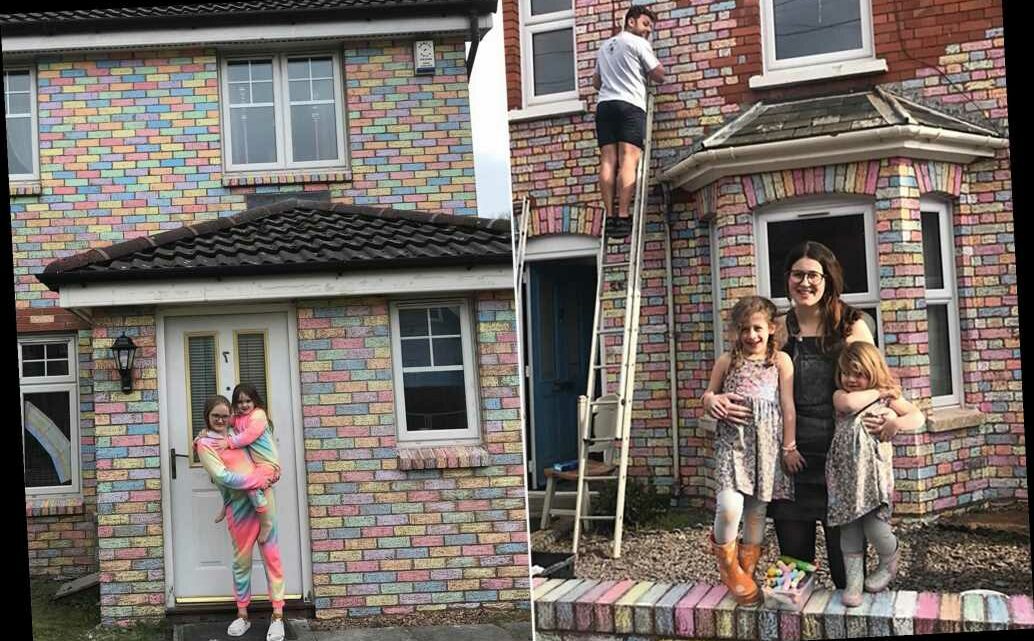 With worldwide quarantines leaving neighbors feeling blue, some artistic families and their kids are also making them red, green and yellow.

Folks have busted out fall decorations early and even put up Christmas lights over the summer.

But one family in England decided to spend a day coloring every brick on the front of their house with rainbow chalk.

Stay-at-home mom Fern Taylor, along with her Royal Marine partner Marco DeFazio and daughters Arabella, 4, and Matilda, 2, spent six hours on April 4 using jumbo chalk to color in the front of their red-brick house in Wellington, Somerset.

“We took inspiration from someone who had done half a house, and thought we could do the whole house,” Taylor, who sells hair accessories on her Etsy shop, told The Post. “I did the bottom half with the girls, and my partner did the top half on the ladders. We just wanted to spread a bit of happiness in this weird unknown time.”

The finished product caught a lot more attention than just the neighbors.

“Everyone has loved it,” said Taylor. “People stopping and smiling on their daily walks taking photos and videos. We even had an ambulance stop, and they said they loved it.”

She added, “We hope other people will follow and do the same. How cool would it be for everyone to do rainbow bricks?”

Well, it seems Taylor might get her wish, as chalk has become a trendy medium to make a joyful statement during the coronavirus pandemic.

Two young girls in Scotland also used rainbow chalk to color the exterior of their home. A brother and sister team in North Carolina depicted a stained-glass church window on their driveway using chalk.

And a California woman, Katie Clark, scribbled quotes from children’s books on the sidewalks in front of her neighbors to brighten people’s days.

Plus, kids across the country are leaving sweet chalk messages outside their friends’ homes to show some love during a tense time.

Although not everyone seems to be a fan of the colorful act. The cops were called after Clark’s artwork appeared complaining that it was graffiti. Two days later, city workers washed it away.

She then wrote about the incident on social media platform NextDoor, saying, “Thanks to whoever complained, the city is here take it off now. FYI for anyone else thinking you can chalk your sidewalk.”

Neighbors rushed to support her, though, and Clark received over 600 positive comments on the post. Meanwhile, others left handwritten notes at her house saying they were going to chalk the sidewalks in front of their homes to show solidarity.