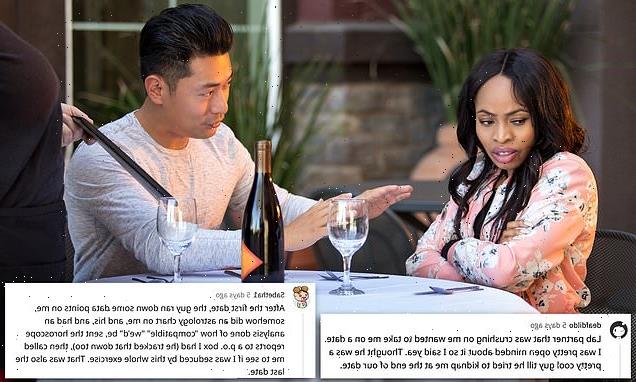 People reveal their craziest first date stories, from the man who made an astrology chart to assess compatibility to the woman whose lab partner tried to KIDNAP her at the end of the night

First dates are always somewhat awkward, but people are sharing stories about their bizarre meetups that prove they can be much worse than that.

Reddit user u/Allygreen4255 recently asked responders to open up about ‘the craziest thing that’s happened on or after a first date’ — and they didn’t hold back, with one person revealing her date refused to take her home.

‘Lab partner that was crushing on me wanted to take me on a date. I was pretty open-minded about it so I said yea. Thought he was a pretty cool guy till he tried to kidnap me at the end of our date,’ she wrote, shocking other users. 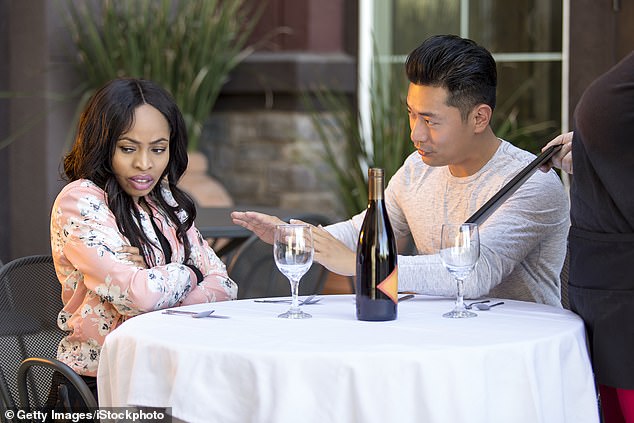 Yikes: One woman’s date made an astrology charts to check their compatibility, while another had to deal with a man who told his mother they were going to have sex

The person went on to explain that they had a nice dinner, but she wasn’t ‘really feeling a romantic chemistry.’

‘After we were done I told him that I needed to get home, and he started making jokes about how it was too early to take me back,’ she recalled. ‘Well, lo and behold, when we got in his car he started driving in the opposite direction of my drop-off location.’

When she asked if he was lost, he claimed he ‘knew exactly where he was going,’ but kept driving further and further away from her home. She tried telling him she had homework to do, but he brushed her off.

‘After 15 minutes of aimlessly driving around, he goes back to the restaurant and pulls into the parking lot. I was pretty confused and uncomfortable at this point so I kinda just rolled with instead of raising any more questions,’ she explained.

‘We sat there and talked about whatever he wanted to talk about for probably an hour before he FINALLY dropped me off. Retelling this story makes me think I should opt for driving myself on future first dates.’

Another woman recounted how she went out with a man who was a little too open about his personal life during their first meeting.

‘In the first 30 mins, the guy told me he couldn’t climax due to his depression meds and asked if I could tell if he was wearing foundation makeup,’ she wrote. ‘Then, after dinner he declared with a soft fist-pound on the table that I was “the gal for him.”‘

And someone else had to deal with a guy who not only assumed they’d be having sex — but also told his mother about it.

‘On the first date the guy’s phone rang and he answered it while at dinner. He said, “Hi mom, I can’t talk right now because I’m on a date and I’m pretty sure I’m going to get laid later.” Then he winked at me. I left,’ the Redditor shared.

Others described dates who borderline obsessive after their first meeting, which was undoubtedly a turn-off for them.

‘I got messaged 37 times in the space of 20 minutes after a date. That was a level of neediness I couldn’t handle,’ one person shared.

Someone else detailed how her date literally looked to the stars to see if they were meant to be.

‘After the first date, the guy ran down some data points on me, somehow did an astrology chart on me, and his, and had an analysis done of how “compatible” “we’d” be, sent the horoscope reports to a p.o. box I had (he tracked that down too), then called me to see if I was seduced by this whole exercise,’ she recalled. ‘That was also the last date.’

Another person admitted to being the reason a date went sour, writing: ‘I… tripped on a something and fell over. And then cut my face and had to be driven by him to go to the doctor to get it checked out.’

However, one of the strangest stories came from an Australian who found bones on a first date  — and thought they were human remains. 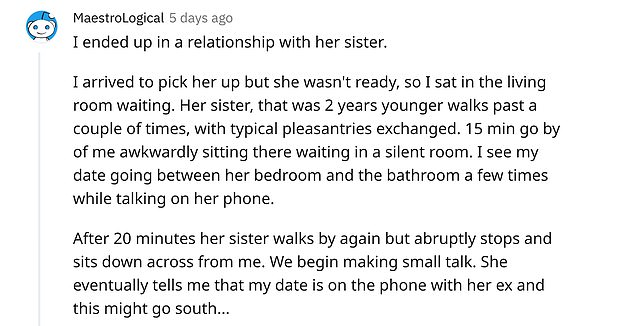 What are the odds? One of the strangest stories came from an Australian who found bones on a first date and thought they were human remains. They turned out to be kangaroo bones

‘It was the height of the lockdown here in Australia and all the cafes were closed so we decided to meet up and go on a bush walk,’ the person recalled. ‘We met at a nearby shopping center and I drove us to a local national park.

‘As I got out of the car, I saw a single key hanging from the twig of a tree. I joked “this is like the opening scene of a Steven King novel.” We both had a chuckle and ventured a few meters into the scrub.

‘All around on the ground were indications that someone had lived there for at least a few weeks, but had not been there for a while.’

The Reddit user said they walked a little further and stumbled upon bones that looked like a human femur.

‘It absolutely appeared that we had discovered human remains. We called the police and waited about an hour for one cop to show up. He took our details and agreed with our assessment. He called forensics and told us to go home as they were likely to be there all night and they’d contact us if they needed to.’

They were in shock and ended up driving around to try to process what just happened to them.

‘We went to Hungry Jack’s (Burger King) and ate in the car in silence. End of date,’ the person explained. ‘We found out the next morning they were Kangaroo bones. Apparently they can look remarkably like human bones.

‘We never contacted each other again. Oh, and it was his birthday.’