Home » Lifestyle » Pastime to full-time: How the pandemic made us turn our hobbies into main jobs 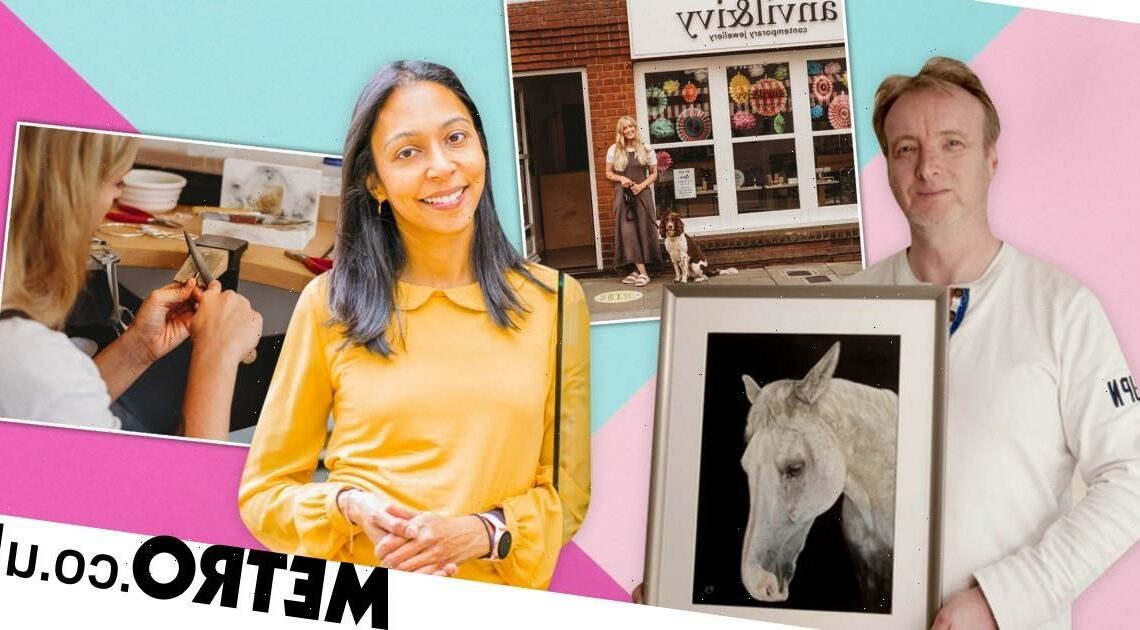 Pastime to full-time: How the pandemic made us turn our hobbies into main jobs

As the Great Resignation rumbles on, salaries continue to rise at a lower rate than inflation, and we’re ordered to return to offices, it’s no wonder many of us are considering turning part-time hobbies into full-time jobs.

The appeal of turning to self-employment is obvious.

You get the freedom to make your own hours, choose your own workspace, and get paid to do what you love.

But how do you make the switch from turning a side hustle into your main gig?

Rob Ballentine, 54, lives in Hampshire with his wife and teenage daughter. He found drawing ‘incredibly curious, mysterious and challenging’ as a child and continued throughout his adult life.

When a friend was devastated by his dog’s death during the first lockdown, Rob pencil-drew the dog – and was stunned by his pal’s reaction.

‘It was such an emotional moment for my friend that he posted it on Facebook,’ Rob tells Metro.co.uk. ‘I was overwhelmed with the amazing feedback.’

In stepped Rob’s wife, who posted his art on a local Facebook group, and RobBallentineArt, a business offering beautiful pet portraits, was born. 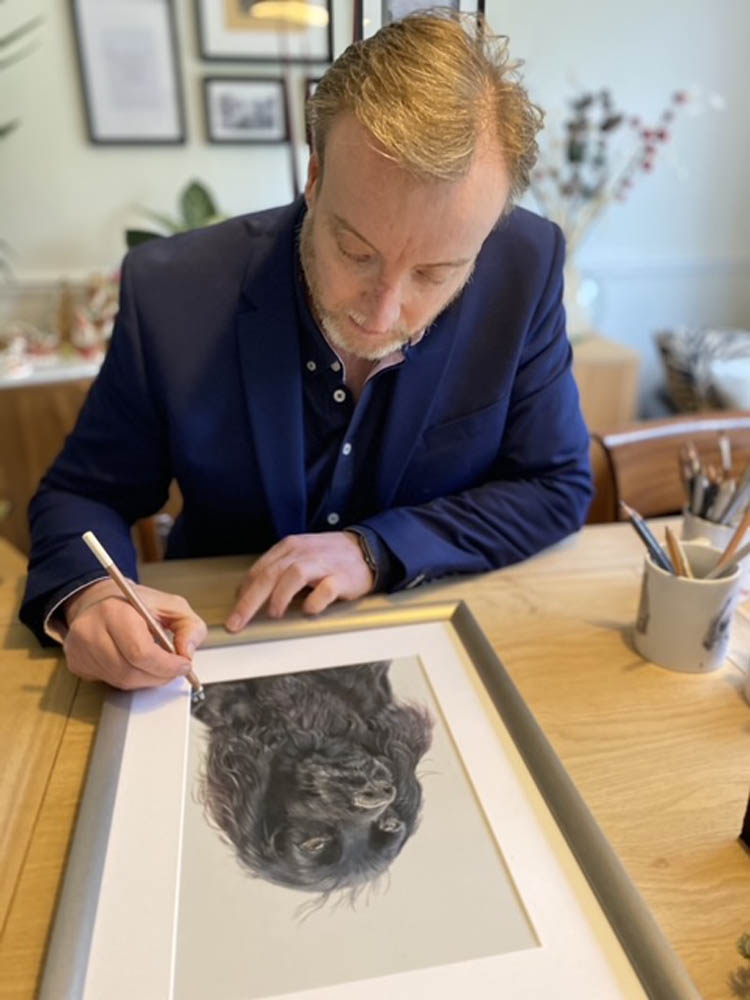 For Rob this was a stark change from working as a consultant trainer in military, defence, government, health care and telecommunication businesses.

When Covid-19 and lockdown hit, Rob had just left his job, where he was earning around £80,000 a year, to start his own training business – but quickly found himself with no work.

Now in demand for drawings, he expects to double his former salary over the next couple of years, charging £450 for an A4 drawing and £750 for an A3 with more depth and detail.

Asked how he dealt with the switch from employed to self-employed, Rob believes that at the early point of the pandemic, there was so much uncertainty and fear about everyone’s fate that not doing something was scarier than doing it.

‘It brought the face of death ever so closer and the unnerving greater than possibility, that it “could be me”,’ he tells us. ‘It brought the “I’m not as invincible as I thought”, closer to home.

‘When one’s life is in view of their possible demise, all else takes a back seat – including fear of starting a new venture, especially one where my skills were still in their infancy.’

The popularity of the portraits helped the decision.

He adds: ‘Without that feedback it would have been a much riskier and perhaps foolhardy decision to go all out.

‘One must tread carefully and wisely in the snow that covers the frozen pond, no matter how much the other side beckons.’

In December 2018, she ran four wreath-making workshops that incorporated techniques designed to aid relaxation, as a soothing passion project alongside her main job as a forensic scientist.

She quickly realised that her side hustle should be her main hustle, telling herself she realised life was too short to stay in work that made her ‘miserable’.

In 2020, Kendall switched her focus to her business, Adventures With Flowers, and in March 2022 she launched The Mindful Gardening Club; a gardening and floristry membership that costs £19 a month and already has six members.

Her new business is more than just a job change. Kendall credits going self-employed for restoring her confidence.

Having suffered being bullied by a work colleague, maternity discrimination when pregnant with her daughter and twice being made redundant, Kendall’s self-esteem was at a serious low. This was gradually restored as she slowed down and gave herself time to reflect.

She tells us: ‘Gardening for mindfulness had such a hugely positive impact on how I felt about myself and my relationships with loved ones, that I had an overwhelming urge to bring it to more women in similar situations to me.’

Transforming your hobby into your business can be a lucrative move.

Sophie French was a project coordinator and PA on around £29k a year. While still living with her mum she founded Anvil And Ivy in 2014, making handcrafted modern heirloom jewellery in the garden shed. Five years later, she moved to a high street outlet in Maldon. Now living the dream with her fiancé and her dog on a houseboat in Essex, she reached her target of £100,000 turnover and doubled her income last year.

Sophie’s jewellery journey began after an evening class in 2014. She enjoyed the craft so much that on the train home, she was already ordering tools and materials to do more.

After a couple of years of making jewellery in any spare time she could find, she started gifting items to friends and family. From here she gradually grew in confidence and started selling her pieces, starting with just £500 she had put aside to buy some silver.

From kicking things off with some smaller items costing upwards of £36, she has now expanded into making engagement rings and bespoke pieces, costing up to £2,800.

That might sound dreamy. But be warned – this kind of switch takes a lot of work.

‘Turning a hobby into a business is not a get rich quick scheme,’ advises Lisa Johnson, who helps people make money online from their passions. ‘It takes time and consistency to show up and let people know you have something they want.’

For 20 years, Priya Velusami, 42, worked in several different roles including what she calls ‘the dream job’ of sourcing fabrics and textiles for John Lewis, earning up to £75,000 a year.

When her niece was born, she began making party dresses from her mother’s saris, and soon starting receiving compliments on her unique and comfortable designs.

Priya began listing the styles on eBay for between £9 and £35, and soon after, her Pri Pri brand was born – she now sells colourful upcycled accessories and kidswear using pre-loved vintage saris.

On target to turn over £30,000 this year, money isn’t the important driver for Priya.

‘Working the hours I want without the costs of childcare, doing something I love and also being able to give employment to people who may not have had an opportunity otherwise, is a priceless figure,’ she says.

‘The flexibility and impact I feel I am having, more than offsets the slight change in revenue and the business is on an upward trajectory.’

Inspired by early memories of sewing with her sari-clad grandmother, who instilled zero-waste values, she says: ‘I love being able to revive beautiful textiles while also helping people and the planet and being around for my two young children.’

Priya used to make everything herself but now partners with an Indian charity that makes up her designs and helps to upskill and empower underprivileged women with tailoring training.

Sales coach and strategist Jade Jemma, the founder of Freedom Zest, has worked with FTSE 100 companies and startups for over a decade.

She says that there is a common trait for success: ‘Those who become market leaders love what they do, live their brand values and come from a place of heartfelt service.’

Asked what advice she would offer people wanting to turn their hobbies into businesses, Sophie wishes that, in hindsight, she’d taken time to price items properly: ‘Having the confidence in my work and business that I do now, would have been very useful back then.

‘It’s difficult to get out of that “hobbyist” headspace and into a business mindset.’

And for anyone looking to start a new business, Dragon’s Den star Deborah Meaden emphasises environmental and sustainable concerns, telling us: ‘The great news is that consumers are increasingly making their buying choices within their values system and sustainability is right up there at the forefront.

‘This gives start-up businesses a huge advantage when it comes to environmental impact as they can engineer their business towards being more sustainable from the outset… without having to change existing embedded values and systems.

‘They also don’t carry the baggage of legacy, which can be hard to shift in the eyes of the customer.’

Lisa recommends immersing yourself into social media – ‘research people already making money from their hobbies so you can see what sells well’ – but warns not to compare yourself to others!.

‘Start building a following on the social media, giving helpful tips on what you know,’ she adds. ‘You need to start out by showing that you can help people.

‘Don’t give up and be consistent!’