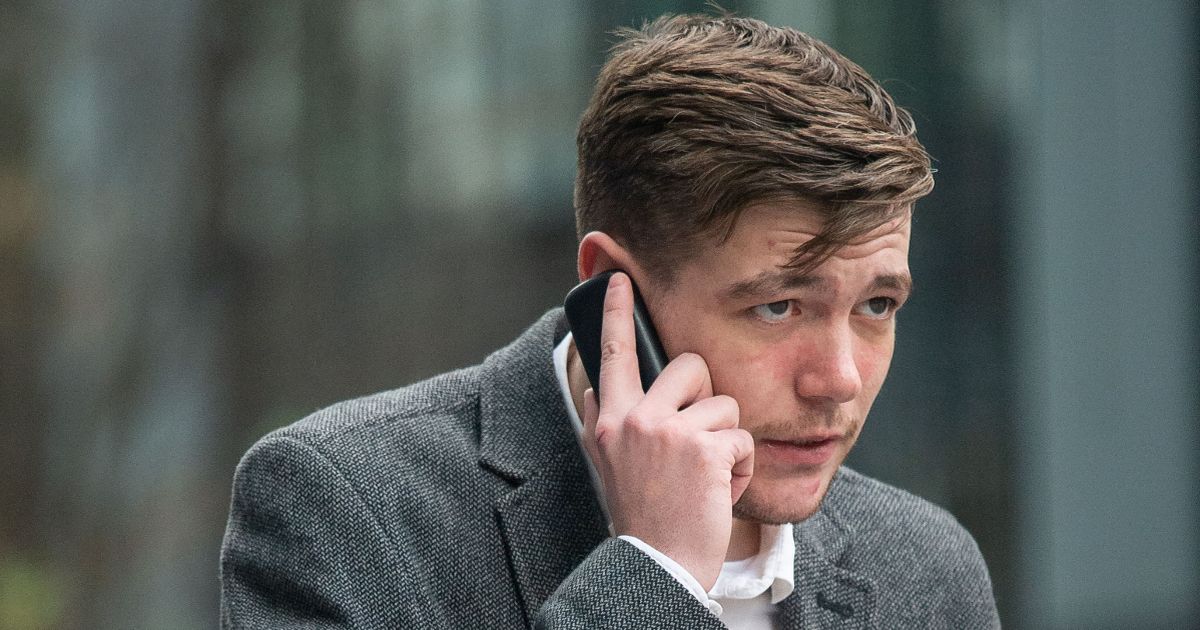 A paranoid boyfriend used his sleeping girlfriend’s thumb to unlock her iPhone to check if she was dating other men.

Alexander Heavens waited until his partner had nodded off in bed before placing her thumb print on the iPhone’s home button to access her texts and emails.

The 24-year-old then woke her up to interrogate her throughout the night as to who everyone was.

He has now been convicted of psychological abuse.

In the last year of their six year romance, Heavens, from Failsworth, near Oldham, Greater Manchester, would also demand the pin code on her phone to check her messages.

And during rows he bit her on the arm and bent her fingers back so far that she thought they might break.

At Manchester Crown Court, Heavens admitted engaging in controlling and coercive behaviour in an intimate relationship.

The court heard the couple’s relationship soured in Christmas 2016 after he suffered bouts of paranoia due to his cocaine use.

Prosecutor Rob Smith said: "[She] always had issues with his temper but had never taken things out on her. She said things started to change when he met new friends in November 2016. He began spending time with these new friends and subsequently taking drugs.

"He started taking his anger out on her and was paranoid about her actions. The first incident in 2016, the defendant became angry because she was spending time with her family rather than him. They rowed about it and he kept arguing with her about it until he bit her and bruised her upper arm.

"After 2017 his behaviour worsened with her, particularly when he alleged that she had been with other men. During arguments, he began bending her fingers back so far that she thought they were going to break.

"When she was asleep he would grab her finger and use it to unlock her phone as it had her fingerprint ID code. He used this to check her phone messages and go through her contacts.

"He would wake her up and ask who everyone was and keep her up all night. Her work became affected and she became sleep deprived.

"On one occasion she was going to sleep when he asked her a question about something on her phone, and when he didn’t get a reply he punched her in the face. She remembers being pushed to the kitchen floor, stood on and trampled on.

"He called her on another occasion whilst she was in bed and woke her up asking for her pin code to gain access to her phone. One morning she woke to find him watching pornography on her phone, which he had been doing all night.

"In March 2017 she found messages suggesting he was seeing someone else. When he responded to her he began screeching at her, ran to the kitchen and he got hold of a knife and held it to his stomach.

"She tried to calm him down but he was continuing to shout at her so she decided to leave. She was worried he would use the knife on her or himself.

"After this he continued getting angry with her and his behaviour worsened even more to the point that whenever she said something he didn’t like, he punched her twice to the face.

"She decided she had enough, she said she was shattered and ended the relationship on her birthday in October 2017. When he was arrested he denied all allegations and said it made him laugh to say he was controlling as he had never lay a finger on her."

In a statement, the partner said: "I have always tried to help him but he has responded with abuse both physically and mentally. He sent numerous messages, he visited me at home and he would always call me when I was with my family. "

In mitigation, defence lawyer Stuart Duke said: "The defendant accepts he is guilty of controlling behaviour. This was his first long term relationship. He accepts he behaved badly. He was drinking a lot after the breakup, he took it badly, and he was taking cocaine."

Deferring sentence for six months, Judge Martin Rudland said: "The public needs to be aware that this sort of behaviour won’t be tolerated. This behaviour needs to be properly met with an appropriate sentence.

"I have come to the conclusion it is in the public interest that this sort of behaviour must be acknowledged, but not today. I have no doubt he has suffered with his own demons, and he hasn’t helped himself by the consumption of alcohol and cocaine.

"He needs to put some distance between him and these events. The court needs to see what he can do by way of addressing the problems he has. He needs to put this behind him and stabilise his life. This doesn’t mean he won’t get an immediate sentence. He can get a lot of self help here. This will still be hanging over him."

"Victims are often too afraid to go to the police, doctor’s or hospital and so it goes undetected for some time. I am going to defer your sentence, which means you can address your problems and you need to grasp those demons that come with them.

"You must understand Mr Heavens, this has been a close run thing. You have been given a chance to address your issues, and your family can support your through this."

Heavens was banned from contacting his ex under the terms of a restraining order.