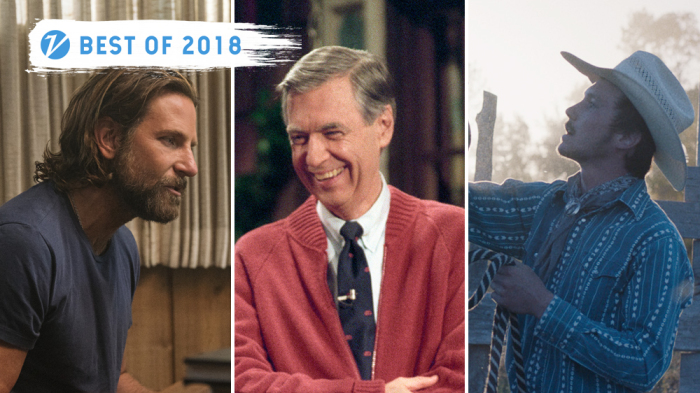 1. “A Star Is Born”
The beauty of Bradley Cooper’s romantic drama is that it finds a way to re-imagine old-school Hollywood classicism as something contemporary yet timeless. The soap-opera beats are all in place, and they pay off with all the grandeur you hope for, but as directed by Cooper with a slow-burn voyeuristic spaciousness, “A Star Is Born” is like something from the ’70s — not just a melodramatic weeper but a journey. Lady Gaga, in her captivating movie-star debut, plays the beguiling songstress Ally — innocent, spirited, calculating, loving — as someone who echoes Gaga herself while remaining her own mystery creation. (Does Ally hold onto herself as an artist or become part of the machine? The answer is both.) And Cooper, in a performance of broken-down shaggy power, creates the most lived-in hellbent movie rock star in a generation. Their acting meshes so intimately that the entire movie feels like a dance.

2. “Won’t You Be My Neighbor?”
How could a portrait of Mister Rogers, the homespun children’s-TV maestro of gentle smiles and sock puppets, turn out to be the most glorious documentary of the year? By keying adults to the depth of Fred Rogers’ message: that the day we stop loving our neighbors, we’re lost. The story of how this angelic ’60s mensch in a cardigan came to play a formative role in the lives of several generations of American kids now looks richer and stranger than it ever did. And that’s because Rogers’ deceptively simple message doesn’t just come off as sublime medicine for an age of bombast and rage. It now looks more clearly like what it always was: radical.

3. “The Rider”
Telling the story of a South Dakota rodeo star who suffers a serious head injury and has to give up riding (forever), director Chloé Zhao creates a radiant and moving Western drama that turns into nothing less than an odyssey of the soul. The actors are real-life rodeo figures playing variations on themselves, and though that gives the film its rough-grained authentic surface, the miracle of Zhao’s filmmaking is that we experience them as fully fledged creations of the imagination. What happens when you can’t do the one thing you feel like you were put on earth to do? “The Rider” pushes that simple, aching question to a place of luminous redemption.

4. “Green Book”
Yes, it’s a cozy Hollywood message movie about a black guy and a white guy who have nothing in common but come to have each other’s backs. Yet that doesn’t mean that Peter Farrelly’s 1962 road movie is anything less than a work of incandescent emotion. Mahershala Ali, as the crisply aristocratic jazz pianist Dr. Don Shirley (a man so wittily refined he turns manners into armor), and Viggo Mortensen, as the bigoted Italian meathead who’s hired to be his chauffeur and bodyguard on a tour of the Deep South, find the notes of truth in humanely flawed characters. And though the nature of a movie like this one is that it’s built like a clock, part of the pleasure of “Green Book” is remembering that when a drama this minutely structured is executed this perfectly, it can touch something elemental.

5. “Chappaquiddick”
It dramatizes — rivetingly — what happened in the drunken car-crash scandal that torpedoed the moral image of Edward M. Kennedy. Yet the power of John Curran’s docudrama is that it’s not just a movie about a 50-year-old piece of tabloid political history. It’s about how the integrity of postwar liberalism sold itself out in a way that America is still reeling from. As the film lays bare the squirmy horror of what happened at Chappaquiddick and how it was covered up, Jason Clarke, in a pitch-perfect performance, creates a full-on study of Ted Kennedy as a man of political passion who, at his moment of truth, revealed himself to be a weasel. The film dramatizes how he did all he could to hold himself above the law, setting a standard for Democratic Party double standards that, to this day, keeps knocking liberal culture off its high ground.

6. “Red Sparrow”
As a thriller, it’s as tricky and well-crafted as “Bridge of Spies” — the kind of neo-Cold War, neo-Le Carré drama that treats Russia not as a cartoon villain but as a force of serious malignancy on the world stage. But director Francis Lawrence, adapting Jason Matthews’ novel, has also made an intensely personal espionage movie, one that carries a subversive and explosive jolt of sexual-political currency. Jennifer Lawrence, all ripe sensory intelligence, gives a star performance as Dominika, a Moscow ballerina-turned-spy who confronts and undermines a world of toxic masculine power. You wish the Russian accents were more consistent (Lawrence’s is fine; Jeremy Irons’, for some reason, is barely there), yet apart from that quibble the acting is superb, especially Matthias Shoenaerts as an SVR higher-up who’s like Vladimir Putin’s cutthroat son and Lawrence as the victim/avenger who’s a step ahead of everyone, including the audience.

7. “If Beale Street Could Talk”
“Moonlight” was a movie of linked but hermetic chapters: life slices that we had to assemble in our heads. But in his first film since that Oscar-winning drama two years ago, writer-director Barry Jenkins transforms James Baldwin’s 1974 novel into a tale that’s powerfully experiential. It’s about a primal injustice (an innocent man is railroaded, sent to prison for a rape he had nothing to do with), but the movie wants us to revel in every lingering glance, every stirring heartbeat of the place he’s falling from. Jenkins, lighting his filmmaking from within, lets us bask in a romantic dream — in the hopes for a good and solid life — that get squashed overnight by a racist society. Acted with powerful purity by KiKi Layne and Stephan James, “If Beale Street Could Talk” is a movie that doesn’t just talk — it whispers and, finally, sings to us about that place where injustice becomes tragedy, and tragedy becomes resilience. It’s a poetic vision of finding light in the darkness.

8. “First Man”
The hero of Damien Chazelle’s outer-space docudrama is Neil Armstrong (Ryan Gosling), the taciturn astronaut who became the first man to walk on the moon. In a sense, though, the real protagonist of Chazelle’s revelatory movie is the American space program itself. Chazelle brushes aside virtually every image we have of men gliding in rocket ships on their way to lunar transcendence to create a tumultuous vision of space travel as a shaky, dread-ridden mechanical-industrial purgatory, with death hanging in the air — which makes sense, since it’s all about tearing holes in the fabric of what’s possible. Gosling’s Armstrong isn’t “repressed” so much as he is restrained and reactive, a good soldier who knows he’s in over his head. “First Man” was dismissed as “cold,” but the film’s emotion is there in the fiber of its danger, which becomes, at every turn, the measure of Armstrong’s heroic humanity.

9. “Wild, Wild Country”
A lot of people gorged on this six-hour Netflix documentary about the Rajneesh commune, a cult devoted to sex and smiling and red-orange clothing, as if it were the ultimate non-fiction page-turner. And maybe it is. The directors, Maclain and Chapman Way, make good on the promise of long-form documentary that worked so brilliantly in “O.J.: Made in America,” building their movie around a singular showdown. In the early ’80s, the followers of the Indian mystic Bhagwan Shree Rajneesh showed up in Antelope, Oregon, and took the town over — a culture clash made in movie heaven. The documentary, based on 300 hours of archival footage, teems with drama (sex, land grabs, food poisoning), yet the unsettling power of “Wild, Wild Country” ultimately comes from the prophetic timeliness of what it’s about: an America of starry-eyed believers who will follow their “enlightened” leader right off a cliff. You can’t make up characters like Bhagwan, a glittery-eyed, drug-addled New Age snake-oil salesman who parades around like the Maharishi crossed with Don Corleone, or his spokeswoman and enforcer, Ma Anand Sheela, a fiercely charismatic backstabbing megalomaniac who will stop at nothing to blaze the true path.

10. “Eighth Grade”
The best movie about the terror and excitement of middle school since “Welcome to the Dollhouse,” Bo Burnham’s drama is about Kayla (Elsie Fisher), a perfectly eager and friendly — and therefore desperate and ostracized — 13-year-old girl trying to make it through the tunnel of eighth grade. Though the film nails an experience that’s universal, it’s also bracingly specific to this era. Burnham has made the first drama to capture, in its bones, the experience of growing up in the digital world, where everything is shared, nothing is sacred, and what we used to call peer pressure is the only dynamic left. Elsie Fisher gives a performance of plucky spirit and exquisite delicacy, attuning you to what her Kayla is thinking but can’t say: that for young people today, simply “being yourself” is the most daunting challenge that exists.