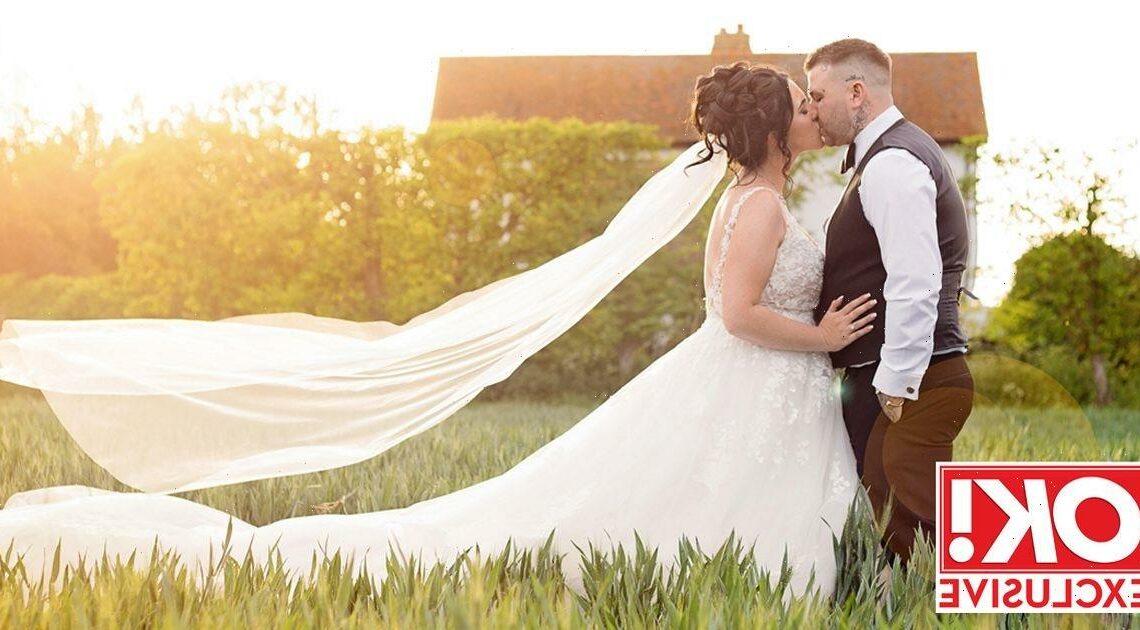 As if auditioning for Britain’s Got Talent wasn’t nerve-wracking enough, Jacob Jones also decided it was going to be the day he proposed to his girlfriend Faye Compton.

As soon as the judges told Jacob that he’d made it to the next round for his version of Joe Cocker’s You are so Beautiful, he asked Faye to join him on the stage and dropped down to one knee. An ecstatic but shocked Faye, who was sitting in the audience said yes.

Now, 1220 days later they have officially tied the knot at Cooling Castle Barn in Kent, and shared the photos exclusively with OK!

The couple would have liked three more people in their wedding photos – the BGT judges Simon Cowell, David Walliams and Amanda Holden, but it wasn't to be!

“We wanted to invite them, but we didn’t know how to get in touch with them,” explained Faye. “Hopefully Simon will still send us a gift. A trip to the Maldives would be lovely,” she jokes.

For Jacob, taking part in the TV talent  show helped him with his nerves on the big day. “After experiencing Britain’s Got Talent-level nerves, standing up to say our vows felt easy. The only time I felt nervous was just before Faye came down the aisle, but when I saw her I was overcome by feelings of pride that she was about to be my wife.”

Keep up-to-date with all the very latest celebrity, health, beauty, parenting and entertainment news with the OK! app

Only select news that interests you by picking the topics you want to display on the app's homepage.

Go behind the scenes on your favourite OK! shoots, take a look inside your favourite star's homes and be introduced to their new babies before anyone else!

Do you love celebrities, fashion, home interiors and beauty? Then do not waste another minute of your time and sign up to our daily newsletter, where you will receive all that – and more – straight to your inbox at 5pm every day.

From exclusive at home tours, cleaning hacks, the latest in beauty trends – and of course, all the latest celebrity gossip, look no further.

Pop your email address in the box at the top of this article, and et voila! Enjoy

The Best Man used his speech to remind the wedding guests of Jacob's big proposal, which got the newlyweds, both 30, reminiscing too.

“I had the ring for a few months but held off proposing because I liked the idea of doing it on stage – and so did the Britain’s Got Talent producers,” says Jacob.

Customs Agent Faye adds, “I didn’t suspect a thing. All I was thinking about was him getting through the audition. I’d done the application for him as I believed he should showcase his talent.

“When Jacob invited me up on stage, I didn’t know which direction I was meant to be walking. David Walliams told me, “Up those stairs love”, and then when I said yes everyone began cheering. Even Simon got emotional. It was a mad moment that I’ll never get over. I don’t know how many times I’ve watched the clip at this point – it’s a lot!

“Sometimes people ask me how I got engaged. When I start explaining they say, “Oh my God I remember you”. It feels like everyone was a little part of it.

“We’ve always done things fast. We swiped on Tinder in 2017, and the next day I went to Jacob’s gig with my mum. That night I stayed at his house – we stayed up all night talking right up until the birds started tweeting. There was no funny business – we promised my mum we wouldn’t! That morning I met both his parents, and the next day he met my step dad. We met both sets of parents within 24 hours of meeting! On one of our early dates we decided we’d get married in a barn. We got pregnant after a year of being together and had our Nancy, who’s now three.”

Full of surprises, Jacob announced to friends and family that they were expecting their second child – Teddy, now two – on the day of the Semi Finals after performing Van Morrison’s Have I Told You Lately, which was their first dance song at the wedding.

“I was sat with all of our family and friends at the show, and none of them knew," says Faye. "I told him not to do it, but he says whatever he's thinking and I love him for it.”

“I got so wrapped up in the excitement of the show, and couldn’t help myself,” adds Jacob. “I didn’t mind my experience on BGT ending after that night though. I'd already won the moment that Faye said yes to being my wife.”

Unfortunately since the show, Jacob lost his dad – the man who initially inspired his music career.

“After I lost him and after coming down from the high of Britain’s Got Talent I haven’t really been singing so much. I’ve focused on my business – Unit 109 Barbers.

"Although, of course on my wedding day I couldn’t resist taking the mic and singing Sweet Caroline with fellow BGT alumni Wayne Woodward. We grew up together, and share this unique bond as we both know what it’s like to do the show. Nancy enjoyed dancing along, but Teddy was long gone. He fell asleep at 6:30pm. I think he's only in two or three wedding pictures.

“Even though my dad couldn’t be there, we had a cardboard cut out of him where he’s holding two beers so he was part of the party. My mum and auntie cried when they saw it for the first time. I spent a lot of the night moving him around the dance floor.

"Faye also had some of his ashes put into my wedding day cufflinks. He died in October 2020 from a sudden heart attack.

"If there’s one thing I’m grateful for it’s that we got to make so many memories together on BGT and he got to see me propose the year before he died. You can see him on clips of the Semi Finals, and he looks so proud. I’ll always cherish those videos.”

Now the couple are enjoying their honeymoon in Dubai, before settling into married life.

Faye predicts Jacob will keep it interesting. “He likes big romantic gestures – he just got Till Death Do Us Part and Lucky tattooed on his head. I do all the logistical things, and he keeps us spontaneous. His next thing is he wants a dog!”

For all your real life stories, make sure you sign up to OK!'s daily newsletter here.