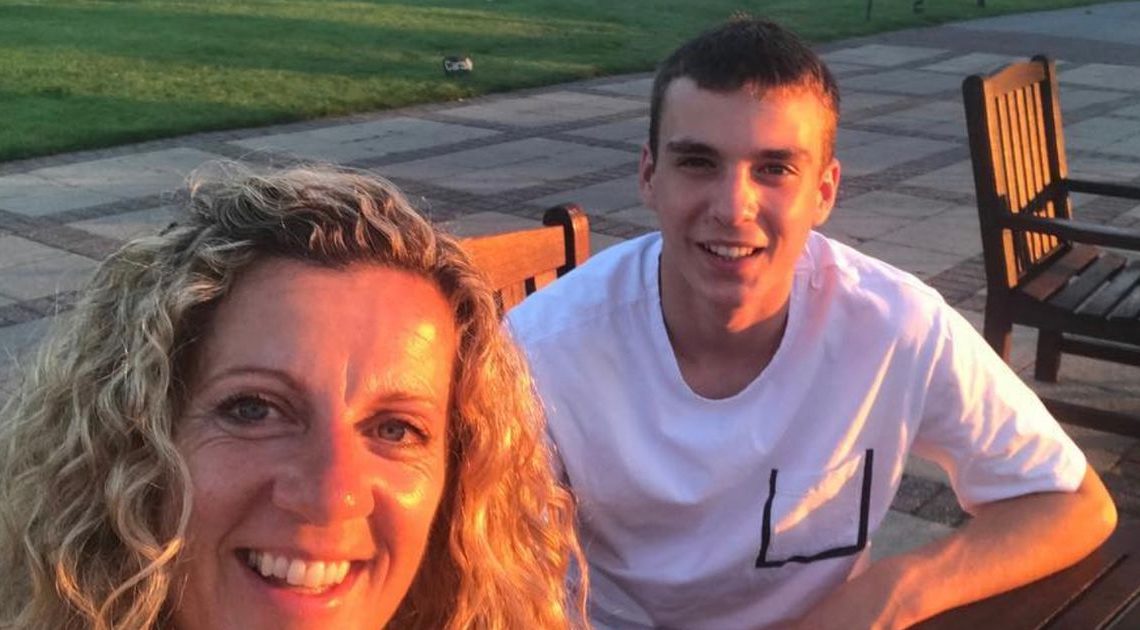 Sally Gunnell has always had a ­talent for clearing hurdles.

Her mother’s mental breakdown gave her the determination to become an Olympian, and she beat back pain to win gold in the 400m hurdles at the 1992 Olympics in Barcelona.

“I have learnt to look at things in a positive way,” says Sally.

“My mum had a complete breakdown when I was 15 and I think that made me who I am.

"It’s why I won my medals because it made me tough. I had to grow up and learn how to dig in.”

But she says her biggest hurdle came recently, when the 52-year-old mum-of-three feared her son had a brain tumour.

Luca, now 18, had suffered tiredness and mood swings for most of his life.

“When he was young he could never stay awake past 7pm and was always on edge, argumentative,” Sally says.

And from the moment he could talk, Luca told her of a pain in his head.

Sally, who now works on TV and as a motivational speaker, and her husband, performance coach Jonathan Bigg, took him to a succession of doctors and specialists.

Yet despite his recurring symptoms they were repeatedly told there was nothing wrong, and were reassured Luca would “grow out of it”.

Sally however, remained concerned and when he began to suffer nosebleeds too, she started to fear a brain tumour.

“The headaches were so severe and came so often it was a real worry,” she says. “As a mum, you start to think the worst.

“I was not getting desperate, because all the doctors were telling me he was fine, but I could not help worrying it was a brain tumour.”

Thankfully, and much to Sally’s relief, the nosebleeds turned out to be a passing phase.

And finally, last year, the family discovered it was wheat that was the trigger for Luca’s headaches.

Blood tests confirmed his brother, Finley, 20, who with his mother’s athletic gene is a promising 800-metre runner, was also intolerant to wheat and dairy.

Sally reacts to egg and cow’s milk, and Jonathan is advised to avoid dairy foods. Marley, 14, has yet to be tested.

Unlike allergies, which involve an almost immediate and sometimes ­life-threatening reaction, food intolerances can take up to 72 hours to trigger ­symptoms, which makes them difficult to diagnose.

Some experts are sceptical about the tests taken by Sally and her family as they look for food-specific ‘IgG’ ­antibodies, which are produced ­whenever we eat those foods, whether we have a reaction or not.

But Sally has no doubts, saying, “It has utterly changed Luca’s life. We’ve all seen a complete change. I only wish he had been tested years ago.”

Sally takes a common-sense approach to health. “It’s about looking at your health as a whole, but still enjoying life.

“I’m much more of a natural sort of person, so I’d rather go down the preventative route. It’s important to tune into your body,” she says.

Sally admits this approach has led to unusual decisions when it comes to her family’s health.

Like their father, her sons Finley and Luca have dyslexia, and homework and exam ­revision have proved to be a constant challenge.

“Because my husband is also dyslexic it was picked up early so they got plenty of support at school,” says Sally.

“We learnt that moving around helped them learn, so I’d go for long walks with Finley as he tried to learn Spanish.

“Then with Luca we would revise as he went round and round on a Segway.”

Sally still runs regularly, but admits “these days it’s for vanity, and so I can enjoy my glass of wine and roast dinner.

“For me, it’s more about my mental health and strength because running puts me in the right place and kick-starts all those positive endorphins.”

And Sally knows how important it is to look after her mental health.

“Mental health problems have affected my family for years. My mum, her twin sister and her brother ­struggled with depression and I think some of that is hereditary,” she says.

“That’s why it’s so important to keep yourself strong. There are some days when it’s the last thing I want to do, but exercise has been my sanity.”

Running for charities also helps her raise awareness and donations for causes close to her heart.

Next month she will take part in a 5k Resolution Run for the Stroke ­Association at Worthing, East Sussex, near her home.

“Five kilometres is brilliant if you have made a new year resolution to lose weight or get fitter, and you haven’t been particularly active,” she says.

“It’s important to start slowly and set an achievable goal. And you don’t even have to run, a lot of people are going to walk the event – and you should never underestimate the benefits of a walk.”

One in six people will have a stroke in their lifetime and there are more than 1.2 million stroke survivors in the UK.

Having high blood pressure increases the risk, but as Sally says, “Even the healthiest can have a stroke. It’s not just people leading unfit, stressful lives.”

Proof of that came last year with the shocking news her friend and fellow Olympian Michael Johnson, 51, had suffered a transient ischemic attack, ­sometimes known as a mini-stroke.

He has made a recovery, but having had a TIA he knows he is at greater risk of suffering a major stroke in the future.