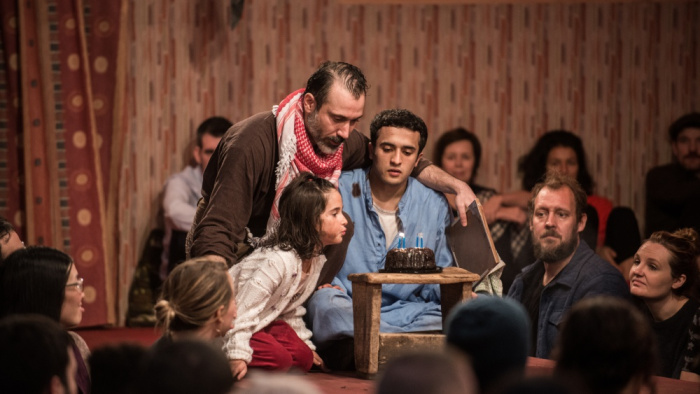 Off Broadway Review: ‘The Jungle’

With the rumbling of semis careening by and the sound of Middle Eastern music in the distance, “The Jungle” aims to vividly immerse audiences into the world of the real-life migrant and refugee camp of the same name. By telling the story of the Jungle’s creation in Calais, France, in 2015, and its eventual destruction in 2016, it hopes to bring attention to the ongoing European refugee crisis. But in spite of exquisite design and a substantial production (co-directed by Stephen Daldry), the play itself is shaky.

In real life, playwrights Joe Murphy and Joe Robertson set up a theater within the Jungle. This play is borne from those experiences, and co-stars several performers the playwrights met in the camp.

However, despite extreme efforts at verisimilitude, a noble purpose and a vitally important subject, the storytelling comes across as heavy-handed and constructed, substituting atmosphere for dramaturgy. It’s a lot of vivid illusion without emotional impact. The excessively theatricalized production, directed by Daldry and Justin Martin, puts distance between its subject and the audience when it could be collapsing it.

The story follows several of the camp’s refugees. Safi (Ammar Haj Ahmad), an even-keeled, English Literature academic from Syria, narrates. Salar (Ben Turner), a vivacious Afghan café, owner, is one of the camp leaders; he’s assisted by his jovial teenage helper Norullah (Mohammad Amiri). Okot (John Pfumojena) a Somali teenager, tries every night to escape to the UK. A number of British volunteers show up to “help,” but are wildly unprepared for what they encounter.

Although the refugees have already made a perilous journey to get to France, the Jungle represents the final hurdle. There they wait before attempting to sneak into the UK to seek asylum. Often paying smugglers to assist them, they hide in trucks or the Eurostar train, or stowaway on the ferry. Meanwhile, the French government views this community of Kurdish, Syrian, Somali, Eritrean, Afghan, Palestinian, Iranian and Iraqi people as a growing problem.

With careful detail, the set (by Miriam Buether) revives the Afghan cafe that was the heart of this multiethnic community. The audience is seated within this rickety restaurant, with a dirt floor, wooden tables covered in oil cloth, and walls and a ceiling made of a patchwork of tarps, cardboard, fabrics, and found objects,. Completing the immersive setting, the actors weave through the audience, pour chai for us to drink, or sit on the periphery amongst us.

Adding to the immersion, finely tuned sound design (by Paul Arditti) makes the room shake when tractor-trailers barrel by on the nearby highway and also provides a persistent industrial hum as a background. Against this is the babel of teeming humanity. With the thousands of people living closely together, we hear distant strains of music, singing and life.

The play deals with the escalating tensions and fading hope at this temporary waystation, as well as the increasing anger at the squalid conditions. But while it is peopled with refugee characters, they are not wholly at its center. The narrative lens is slightly larger—dwelling on the politics of the French and British borders, the dangers of the asylum process, and the mistakes made by all sides in trying to manage the encampment.

By concentrating on the disorder and disputes of the camp, the play spends little time on how the refugees got there. But those histories deeply inform the present discord. The few scenes where characters talk about their past give us emotional clarity and a window on the agonizing choices they made to come here. But these personal, specific moments (with strong performances by Amiri, Turner, Ahmad, and Pfumojena) are far too rare.

The central problem is the plays structure. The overpadded first act meanders, setting the ambiance and loosening up the audience with some occasional good cheer (dancing, juggling, comic relief), but it functions baldly as manipulation so the second act can tear it all down. Eventually, the stakes become clearer as the camp starts to collapse — emotionally and physically under pressure from the French government’s evictions.

Even with the production design’s “authenticity,” the theatricality of the production keeps pushing reality further away. You are acutely aware you’re at a show being acted.

It’s devastating to spend all this time in a room with these characters and in this place, and emerge knowing less than when we went in. Disillusion may be part of the point, but it also feels like a lost opportunity.

Off Broadway Review: 'The Jungle'

Bucks hold off Raptors in thriller between Eastern Conference heavyweights